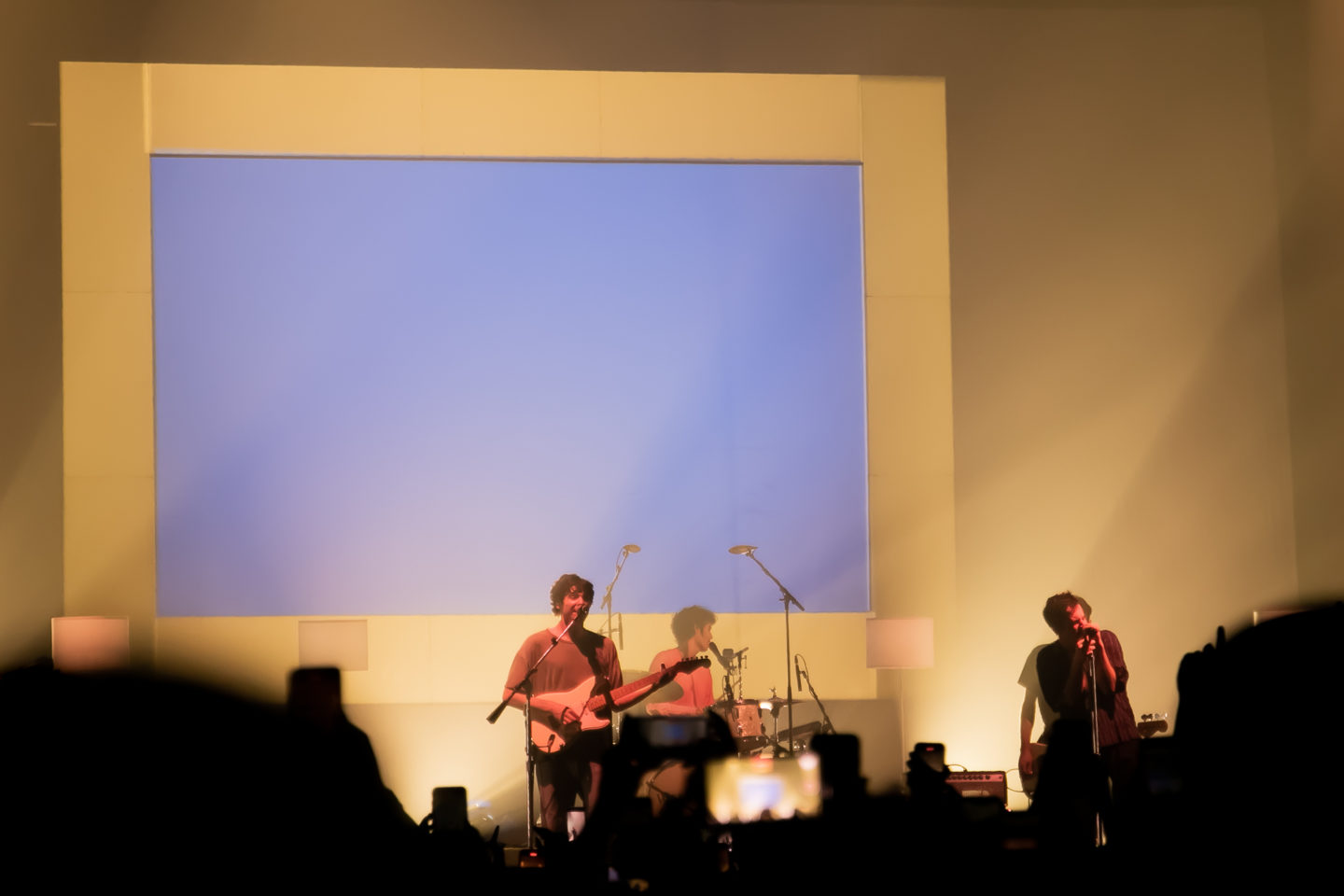 Wallows at The Shrine Expo Hall

In today’s music industry that, at times, may seem overwhelmed with quick content and viral trends, it’s refreshing to support a band of good people who just live out their dreams in music and stay true to themselves. As a longtime fan, I’d say that the Los Angeles alt-rock trio Wallows are a genuine example of this. Dylan Minnette, Braeden Lemasters, and Cole Preston have been close friends and have been playing as a band together since they were 12 years old (although their band name had been through a few changes before rebranding as Wallows in 2017). It’s clear that the three of them have believed in each other and their commitment to music for many years because, thirteen years later, I was extremely excited to be able to watch my favorite band play live at the Shrine Expo Hall. This show wrapped their highly anticipated three-show hometown residency in Los Angeles in continuation of their ‘Tell Me That It’s Over’ world tour, which highlighted the band’s phenomenal sophomore album. Shown in a 90 minute set, it’s clear that these boys can exhibit their insane musical talents, lighthearted nature, silly antics, and intentionally make time on and off stage to interact with their devoted younger fanbase.

Some extremely dedicated fans began the anticipation by venturing to the Shrine Expo Hall venue to start waiting for a front row spot at the barricade…straight from Wallows’ Greek Theatre show… 22 hours before. To pass the time, fans have made posters asking for setlists or Cole’s drumsticks as souvenirs that the boys love handing out themselves at the end of their set. Many also love to bring cowboy hats, stuffed animals, or funky glasses that Dylan and Braeden love trading to spice up their look onstage in exchange for one of their guitar picks (this night, lead singer Dylan impressively caught a little stuffed Elmo that he danced around with before throwing it back out to the crazed crowd).

The waiting game for the hard-fought battle for the front row also gives time for fans to brainstorm their favorite song to request for Wallows to play. The band has fun changing their setlist every show, running through a few basic variations that also includes a few “fan-pick” songs that keep the easygoing boys on their toes. I really admire how they’re always listening and responding to what their fanbase wants to hear. This time, Wallows started the night with their album’s first track, Hard To Believe. They didn’t give the crowd a chance to stop dancing as they rocked their way through many of their hits, including their routined goofy rendition of 1980s Horror Film II (featuring Braeden’s iconic jump off of Cole’s drum set stage), their setlist regulars like Pleaser, Remember When, and OK, and some rarer crowd pleasers that they mix into the set every few shows like Sun Tan and Dig What You Dug.

A definite highlight of the night was the surprise confetti cannon craze that rained during the chorus of their new upbeat standout, I Don’t Want To Talk. The boys finished by leading their three-song encore with two super rare songs of theirs to play live (I’m Full and Uncomfortable) and closed the set with their most popular song Are You Bored Yet? Whether fans left with guitar picks, setlists, or pockets full of confetti, it was a memorable last night of what Los Angeles based fans online have called “Wallows Week”, as many went to multiple performances and their merch pop-up shop, as well, while I know the boys themselves had a career-heightening hometown weekend before their tour continues on to bless basically every continent minus Antarctica.