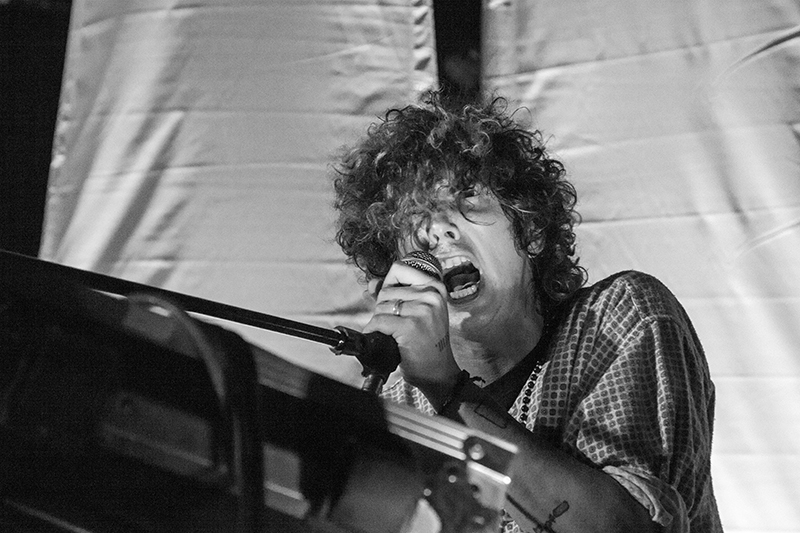 Trevor Powers has some long and crazy hair.

Damn it. That still rings hollow. But I’m at a loss, friends. Trevor Powers descended upon the Metro Wednesday night and I doubt even his most loyal fans knew what was to come.

Powers is a master of subversion. He creates dense soundscapes on stage with electronic audio so thick one could get lost, but he always jumps in to lead you out of the forest. Delicately (and I do mean delicately), Powers wields the classic four-chord song structure like a beacon of familiarity, but he never lets it settle. He inserts sporadic, four-minute-long instrumental breakdowns that never feel “jammy” and leave crowds breathless.

Youth Lagoon is Trevor Powers’ baby, a trippy outfit for his singer-songwriting tendencies. A Boise, Idaho native, he never seems to shake off his down-home attitude despite his Los Angeles-inspired attire, which really only adds to his on-stage charm. He’s charismatically distant, if such a quality exists.

Two years ago he surfaced with his first album of bedroom dream-pop recordings, The Year of Hibernation. It was well received and rightfully so—it’s laden with surreal pop nostalgia that seems particular and universal all at once. Just this year he debuted his sophomore album, Wondrous Bughouse, which saw Powers reinvent the wheel to fantastic results. Let’s just say that nobody will be accusing Youth Lagoon of phoning in Round Two. Whereas the first album uses intelligently arranged pop structures for psychedelic exploration, Bughouse flips that equation upside down. The pop songs are still in there, but they’re buried beneath layers of texture and mysticism, a la Animal Collective (though without the hipster attitude).

Ah, that’s an important thing to note about Youth Lagoon: none of this feels like “Brave New Music,” but that doesn’t work against its effectiveness. Powers has a full band with him on stage now bringing these tracks to life with bass notes so low you’ll fear the brown note. But while this lets the complex tapestry of Powers’ songs sound more glorious, what still impresses the most is the guy’s simple ability to arrange the hell out of these songs. He’s a natural.

That level of skill echos the kind of mastery we once worshipped in Paul Simon (and, by extension, good ol’ Arty). Actually, that might be a better comparison than I first intended — there were moments during Youth Lagoon’s performance that Powers’ voice just really rubbed me the wrong way. He’s got a unique and sometimes shrill tone, situated somewhere between Edith Piaf and Jimmy Boyd. Sometimes, it just hurts more than it helps.

But these are minor complaints. I was overwhelmingly impressed with Youth Lagoon. All these words are trying to encapsulate the masterful weaving of electronic textures, soundscapes, and mysticism on display Wednesday night, but I’m thinking I should probably just leave it at this:

Trevor Peters is an EXCELLENT musician.

My Brightest Diamond at Metro

Her awesome red hair and sequin outfit added a sparkle only a diamond could.