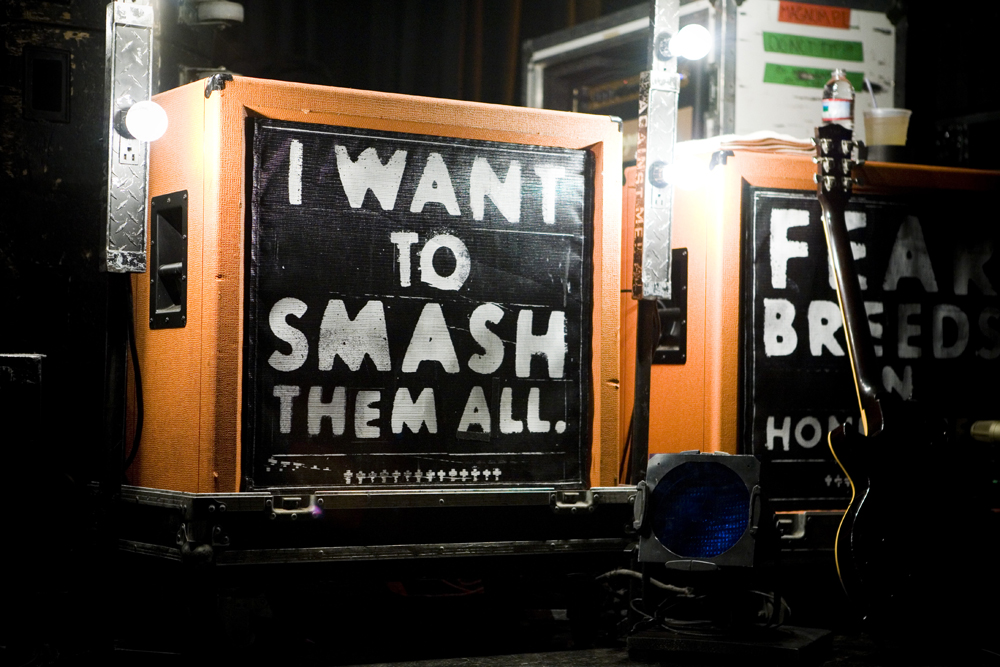 Against Me! at Metro

Against Me! is a band capable of galvanizing crowds like a swift musical kick in the ass, but you have to know what you’re getting yourself into. There is no gray area with Against Me! You either love them or you hate fun. If you just so happen to enjoy getting yelled at in verse and chorus–while guitars, bass and drums rattle your brain–you’ll be an Against Me! fan for life.

The entire venue was filled with a raw emotion and energy that lead singer Tom Gabel best describes in “Thrash Unreal” when he growls, “If she wants to dance and drink all night, well there’s no one that can stop her. She’s going til the house lights come up or her stomach spills onto the floor. This night is gonna end when we’re damn well ready for it to be over. Worked all week long now the music is playing on our time. Yeah we do what we do to get by, and then we need a release.” Everyone in the band–but especially Gabel–performs with such reckless abandon that it verges on self-mutilation. You’d think that energy levels like that wouldn’t be sustainable, but Gabel and company played non-stop through what seemed like their entire catalog in less than an hour. The masses were already satisfied, but the show was only half over.

I WANT TO SMASH THEM ALL. FEAR BREEDS IN HONEST MEN. Looking at the spray painted amps decorating the stage, you can almost hear Gabel screaming the lyrics to “White Crosses” and “High Pressure Low” at you with musical accompaniment that you WILL shake a fist to. It’s that sort of positive anger that binds the band together and bonds them to the audience. They don’t play non-stop with no breaks because they have somewhere to be, they do it to squeeze in as many angst-ridden anthems as possible before Chicago’s curfew hammer drops on the all ages show.

Gabel might be the driving force behind the band, but Against Me! operates as a cohesive unit capable of inciting everything from straight to DVD sing-alongs and moshing that comes very close to being riotous. The audience is whipped into a fervor that convinces them that running full speed at a bunch of strangers in close quarters isn’t just a good idea, it’s a great one. And so there was moshing – lots of moshing. It got to the point where it was hard to tell if the floor was shaking because of Against Me!’s valiant attempt to make everyone in the audience deaf, or if it was because different generations of fans might have been a little too excited and/or drunk and were taking out their aggression on the venue. The point is, the floor of the Metro felt like Jello.

As one kid surfed through the crowd atop hands and heads of other audience members for the umpteenth time, Gabel made eye contact and sang what seemed like an entire verse just for him. That, right there, is why Against Me! will have fans for as long as they’re playing shows. When the house lights finally did come up no one wanted it be over, but everyone was damn well ready because complete and total exhaustion had finally set in. As everyone congregated outside for the obligatory post-show cigarette, it was clear that this was the most satisfied any of us had been in a while.