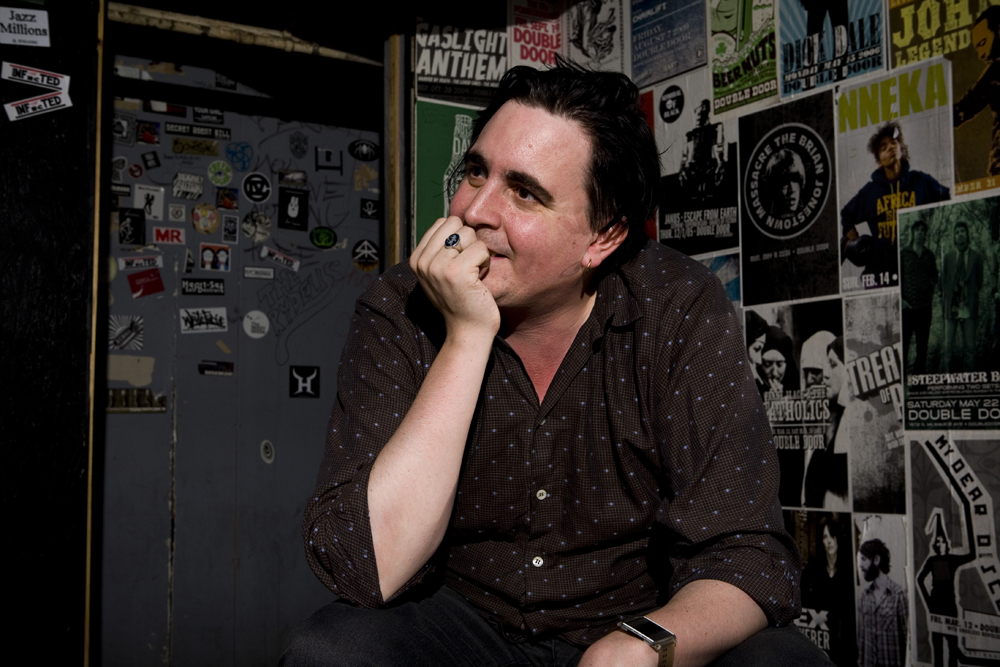 On June 15th, @EddieArgos addressed Art Brut fans in Chicago on Twitter by saying, “We’re playing at the Double Door tonight. Ian thought it was called the Dumbledore. He is now sad it’s not actually a Harry Potter themed venue.” In 140 characters or less, the tone was set for the comical British personality who would later sit down for an interview that evening.

Eddie Argos is truly a character. Brimming with energy and bewitching idiosyncrasies, he is apt to be cast in a movie or play that calls for someone larger than life. His words are rushed and marked with a distinct English accent, often delivered with expressive faces that animate his conversations. While he’s made a career out of shouting songs and won’t hesitate to raise his middle finger on stage, he’s actually more of a “softie” than one may guess.

A quick Wikipedia glance will tell you Argos was often associated with doing quirky or bizarre things on stage – like playing with a vacuum, for example  – but he explains that such eccentricities were just early on in his career because he needed a security blanket of sorts. He had always wanted to be in a band somehow, but original attempts to learn an instrument didn’t prove productive – so he was left with his voice. “I really did that sort of thing back then out of nerves. I don’t play a guitar to hide behind – so hey, why not put this odd thing in front of me and stick that between me and the audience.” It’s that pro and con that many performers need to face; being accessible enough for a performance to feel honest, but needing to give way to vulnerability in exchange.

That was then and this is now, however. In present day, Argos has grown leaps and bounds from needing any kind of protective barrier on stage – and he has grown musically too. On the band’s new album Brilliant! Tragic! Argos is proud about the fact that he is really singing for the first time, opposed to doing his “usual shouting”.

Touring all over the world has no doubt widened the frontman’s  perspective – and he was able to lend insight on what he’s found to be a defining difference between our 50 nifty and his side of the pond. “America is different from the UK in that I find the UK to be more cynical,” says Argos. “People in the UK hear me sing about someone in a song and they say, ‘Oh, you went and made that person up’ but people in the States believe in the story. America is more sentimental in that way.” Learn something new every day.

Just as Argos addressed Chicago when he was in town, he extends greetings by tweet to every city they visit. Art Brut feels at home on the road  and each show is a proposal to come over and get drunk with them. (Evidenced by tweets to Cleveland, Washington, D.C. and Hoboken in recent weeks!) They want you to know you’re invited – but what they really want you to know is that when you arrive, they will be “ready to rock the fuck out.”

P.S. Fans of English alt-rock band Pulp should definitely give a listen to new song “Lost Weekend”. It will make you wish Art Brut would release a cover of 1995’s “Common People”.