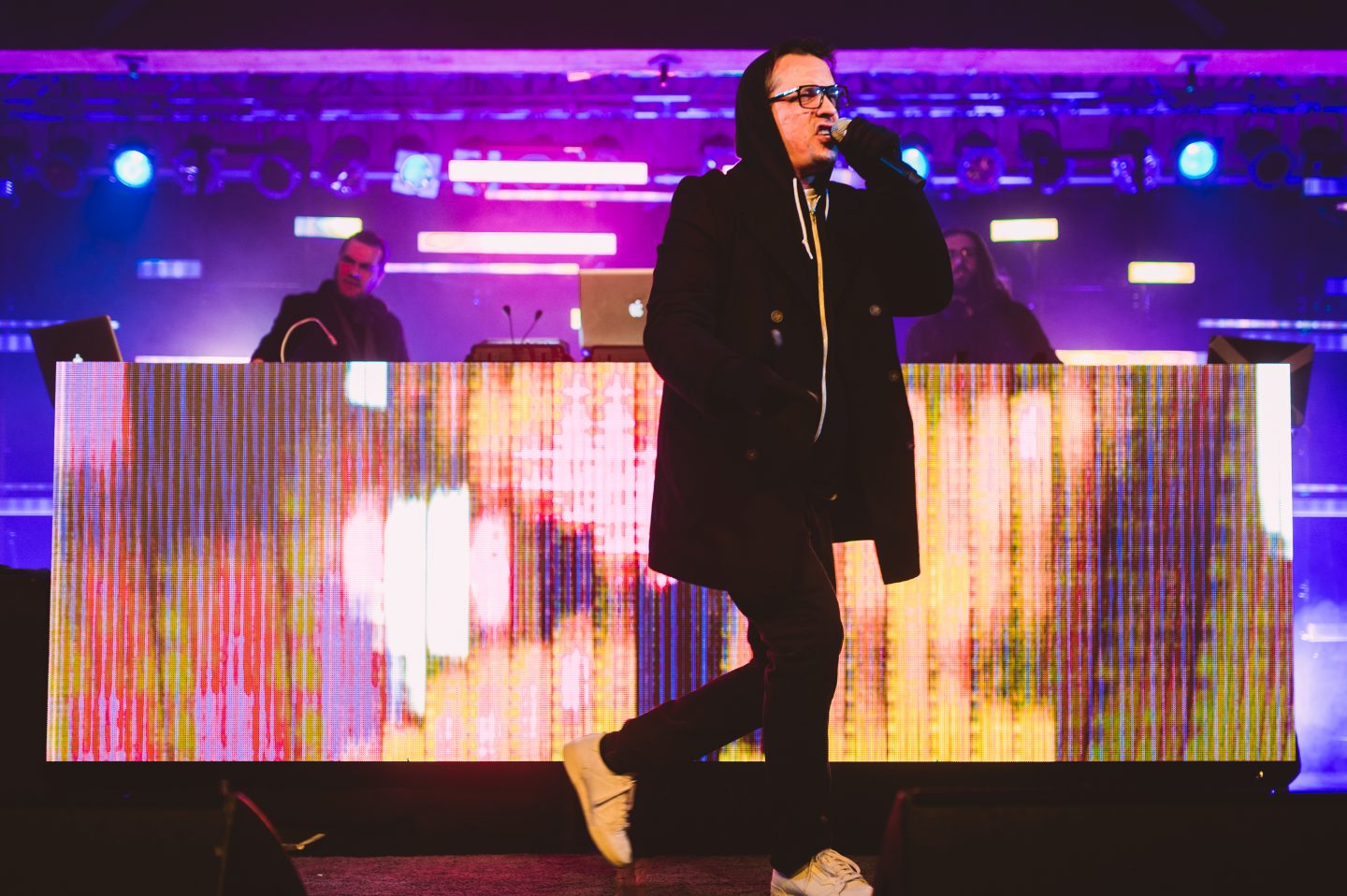 I originally grew up in Minnesota, but during the handful of years I was able to be part of the MPS scene, I spent it with the hardcore kids and unfortunately missed out on the hip hop. Later in college, a friend of mine introduced me to Atmosphere and they’ve been on my radar ever since. I’ve been threatening to see them for a handful of years now, but between buddies bailing and plain old life getting in the way, it hadn’t happened yet… until tonight.

I was excited, but not sure what to expect. Showbox SoDo is a great venue, but I feel like this kind of experience would be better in some tiny intimate dive, even if it was -20º outside. It’s a scrappy crowd and the majority are chatty and dressed to be seen. Quite a contrast from the show I was at the night before.

Puffs of smoke spring up like volcanos ready to blow, and you can smell the green.

The rest of the air is electric with excitement and the crowd goes wild as they take the stage. Slug comes out in a hoodie, a peacoat, and black leather gloves. That seemed pretty excessive for a Minnesota boy. I mean, it’s only 45º out, almost shorts weather in the homeland, and I’m already sweating just looking at him. But as the show progresses, he slowly strips down to something more reasonable.

You can feel the bass shaking your booty for you, but even so, you see several pockets of ladies working it, and the rest of the crowd is trying to keep up or just straight bobble-heading. Slug definitely knows how to work a crowd. With those perfect pauses to build the anticipation, name dropping the city and venue, getting the fists pumping, and knowing when to preach and when not to. After the first song, he pauses to sip from his red Solo cup and addresses the crowd:

Throughout the show, you could tell he was trying to keep more of a stoic persona, but the crowd was too into it and you could catch a smile creeping in here and there. Although, at one point Slug stops to call out some couple up front that weren’t paying attention:

“…That’s a commandment. Look at all the fun everyone around you is having. Have fucking fun with us.”

I couldn’t see the situation from my vantage point, and although believable, it also felt a bit of an exaggeration to setup the next song, and it worked well.

Atmosphere raps about some real shit. The day to day struggles of life and the complexity of relationships. Although there is a lot of seriousness, there are also some more entertaining moments. Like the song Postal Lady, which is about a crush on a mail carrier.

The 3 female-based openers were all excellent, and mid-way through Atmosphere’s set, Nikki Jean came out to accompany them for a song, adding in some flair. I had been told they usually play with a full band and I was very disappointed to see that wasn’t the case tonight. However, the sweet onesie I picked up for my friend’s newborn almost made up for it.

He ends with a big “I love you. Take care of yourself. Take care of each other.” That was the biggest theme of the night; love. Unfortunately, I think only half the crowd took that to heart, but as intoxicated as we all might have been, at least there was no real drama. Only love for the music.

Atmosphere at The Congress Theater

Rich soundscapes and transformative melodies take you through space