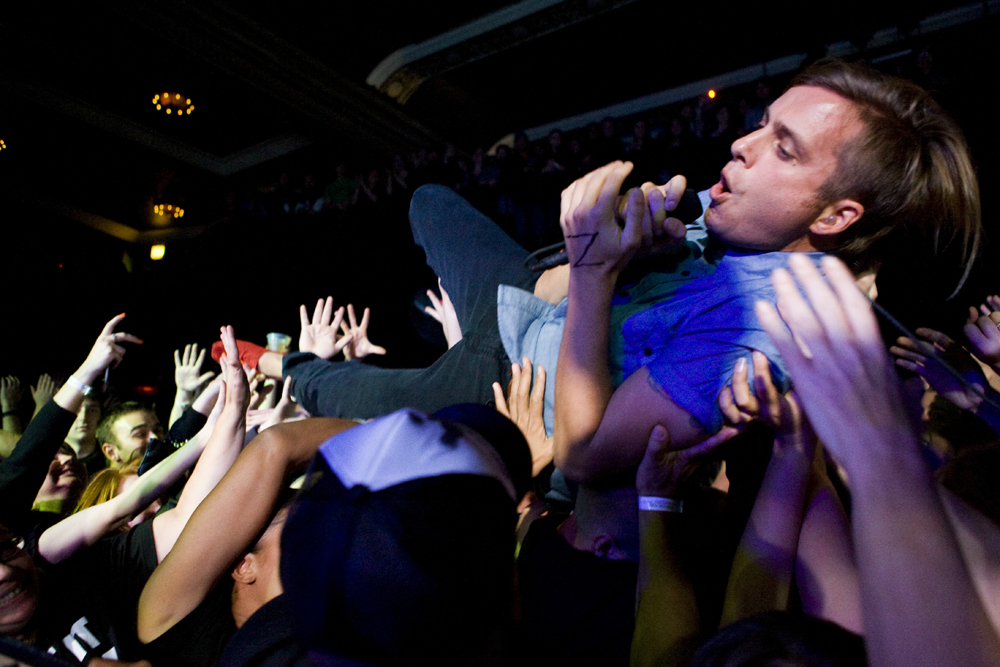 For about 90 minutes the Chicago music venue of Metro wasn’t Metro. It was a place called AWOLNATION. Aaron Bruno took such ownership of that stage that it became his domain. He unlocked the door and rolled out the welcome mat for us to all come on in and consume his curious concoction of uninhibited vitality and controlled rage.

We learned the band’s bus broke down in Minneapolis, which resulted in a missed taping for JBTV but fortunately not in a cancelled show. Who knows what kind of riot would have broken out on Clark from the zealous fans had the show been nixed. That would be the same fans who erupted in cheers when AWOLNATION’s creator Aaron Bruno took the stage. He bounced right in to “Jump On My Shoulders” before also getting into other songs off his debut full-length album, Megalithic Symphony. These included “Guilty Filthy Soul” “All I Need” and “People”. Bruno’s movement on stage is deliberate and amusing; he may shuffle around, wave his arms spastically or hunch his back and drag his feet like a caveman. It never feels planned, but more so like spontaneous movement with total abandon. (And yes ladies, it’s hot.)

Bruno’s delivery of the romantic apology in “Not Your Fault” provided a great sample of the dual-natured personality that helps to define AWOLNATION. He swings from sweet to severe in a hot second as he comes in and out of the verse and chorus on this track. Hit song “Sail” ignited the house with the juxtaposition of playful piano keys and intense roars of the track title. His ability to stitch together contrasting levels of intensity and make it work sparks raging freedom in his fans. Countless crowd surfing daredevils (both male and female) continued to go for it despite security guards aggressively pushing them to the floor every chance they could. Bruno himself threw his body onto the crowd twice, mic still in hand and lyrics still on his lips. This of course only stirred even more energy from the rowdy bunch. At some point there was a mosh pit that spun around like the eye of a hurricane in the middle of the packed floor.

Blue shirt soaked in sweat, the leader of AWOLNATION then took on the supercharged track “Burn It Down” with the support of his touring band. This was followed with a calmer moment of Bruno on bended knee, singing part of the Bill Withers’ classic “Lean On Me” to his fans. He then announced there was one last song – and after a whimper from the crowd, offered comfort that it would be 15 minutes long. He wasn’t kidding. “Knights of Shame” is a monster of a song at 14:58 in length. Embellished with theatrical touches and offering an almost wild mix of genres, it felt more like he was performing three different songs with seamless transitions. (Blame it on his ADD?) Uppity pop-flavored vocals merged into rap that pushed toward a rock ballad wave that crashed on the enraptured mob at the foot of the stage. Toward the end of the song, Bruno charged toward the drum kit to hammer out the ending with high energy percussion. Certainly unexpected as far as music composition goes and perhaps a bit bizarre, the song is a masterpiece that boasts a crescendo well suited to a finale. Or at least what we thought was a finale. As if through telepathy, you could sense that Bruno just wasn’t ready to end the experience there. Still behind the drums, he and the band went right into the instantly recognizable all-consuming opening to Rage Against the Machine’s “Bulls on Parade” before finally sending love to the crowd and walking out of eyesight.

The show ended, the room was empty and the visit to AWOLNATION was over. Metro was back to Metro, ready for the next artist to come in and attempt to transform that stage like Aaron Bruno just did.

AWOLNATION at The Neptune Theatre