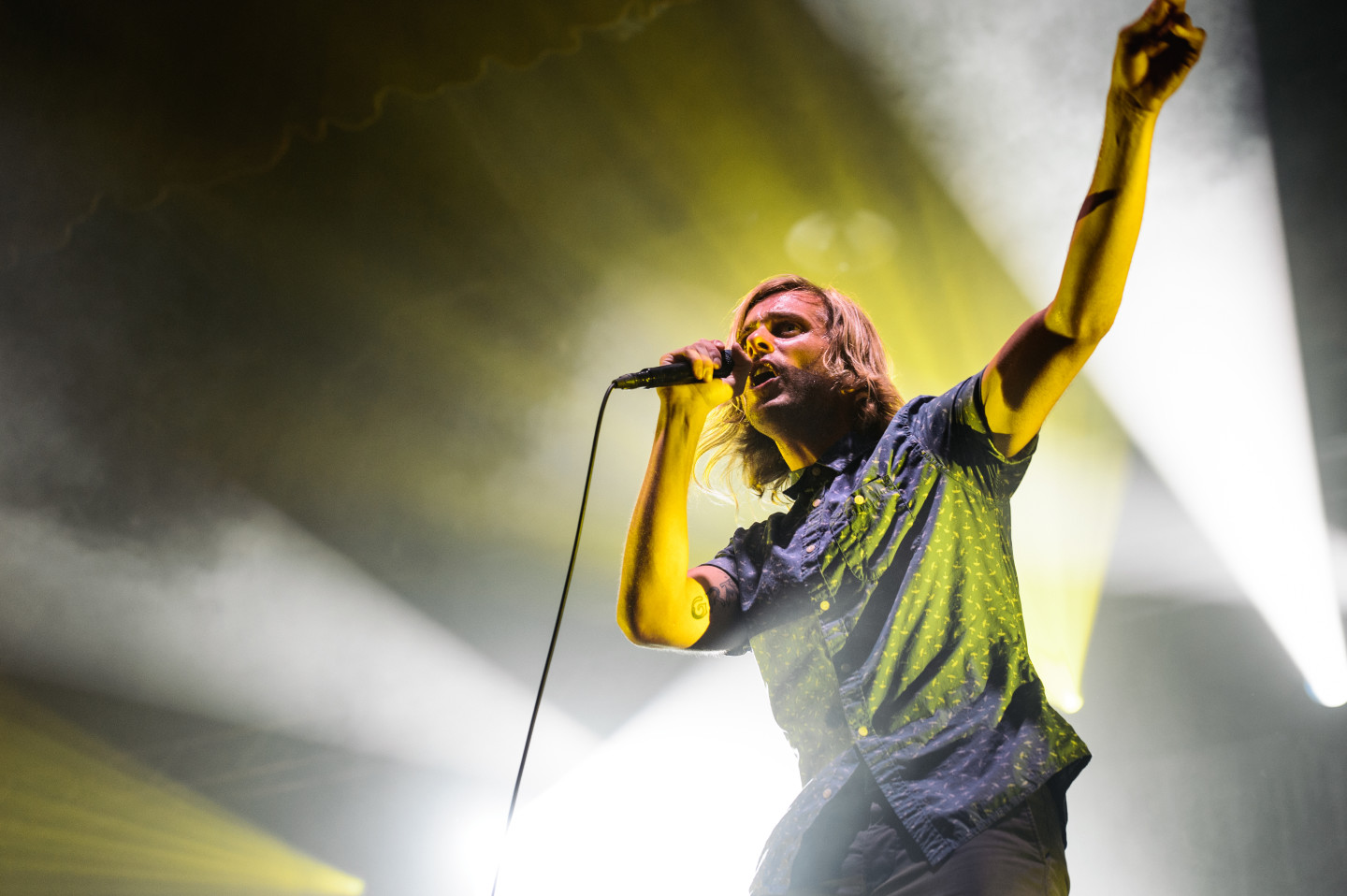 Aragon Ballroom, meet Aaron Bruno. Mr. Bruno, meet an endless throng of adoring fans in an enormous Chicago venue, all here for you. He wasn’t immune to this ironic moment in his life — at one point during his set, Bruno recalled an anecdote in which his old band, Hometown Hero, had opened a show here many years ago. Now, here he was, a decade later, commander of the AWOLNATION space ship and puppeteer of the crowd on a Saturday night at the Aragon.

It was clearly his show and his alone. That’s not to undermine the on-stage value the band behind him provided — Drew Stewart (lead guitar), Kenny Carkeet (guitar/keys/backup vox), David Amezcua (bass/backup vox) and Hayden Scott (drums) were all terrific in their roles and played these songs with every ounce of vitality they required. They captured the strange sound of the band, at times electronic, at times pop-metal, and re-presented it for the audience as flawlessly as industry veterans. It’s just that, despite the clear and present talent of his band, Bruno commands every moment of your attention as he performs.

He’s mesmerizing in a number of facets. For one, he is the perfect orator for his music. “I had a dream,” he proclaimed, “that this whole section was gonna jump together tonight.” Cue jumping. For another, his voice refuses to be pigeonholed. He screams only as much as he jaunts melodically like a chorus tenor. It anchors these songs as they swing between wholly and entirely disparate verses and choruses.

AWOLNATION’s music is, in this way, as fascinating as it is problematic. Sandwiching vastly different genres together is as old as Post-Modernism, but they insist on filtering the tunes through a pop-heavy, rainbow meat grinder. Their song “Wake Up” bounces from a Muse-inspired verse immediately into a chorus that may as well have been stolen from Maroon 5’s now-ancient album,Songs For Jane.

All of their tracks have these moments, these quick and jarring shifts between musical modes, but they don’t always work. Several times while AWOLNATION was on stage, they spent valuable time building towards a rewarding crescendo that never came because they shifted into three different beats before they got there. Like the young Red Hot Chili Peppers, circa Freaky Styley, this band sometimes did too much (though one could argue the Peppers did it better). This isn’t necessarily a shock — they’re touring their first album, after all. Still, one would expect a greater level of songwriting restraint from a journeyman musician such as Bruno.

Oh, well. Any complaints I had about AWOLNATION and their performance didn’t linger. The set was, overall, a great success — they brought the house down on several tracks, most notably their biggest hit, “Sail” — and I shamelessly admit to getting down on a few jams. Their presence was too big, their phrasing too fun, and their electropop/mod-punk/industrial vibe too fascinating to not celebrate. I expect this is only a taste of things to come for AWOLNATION and for that, I am stoked.

Anberlin at The Aragon Ballroom