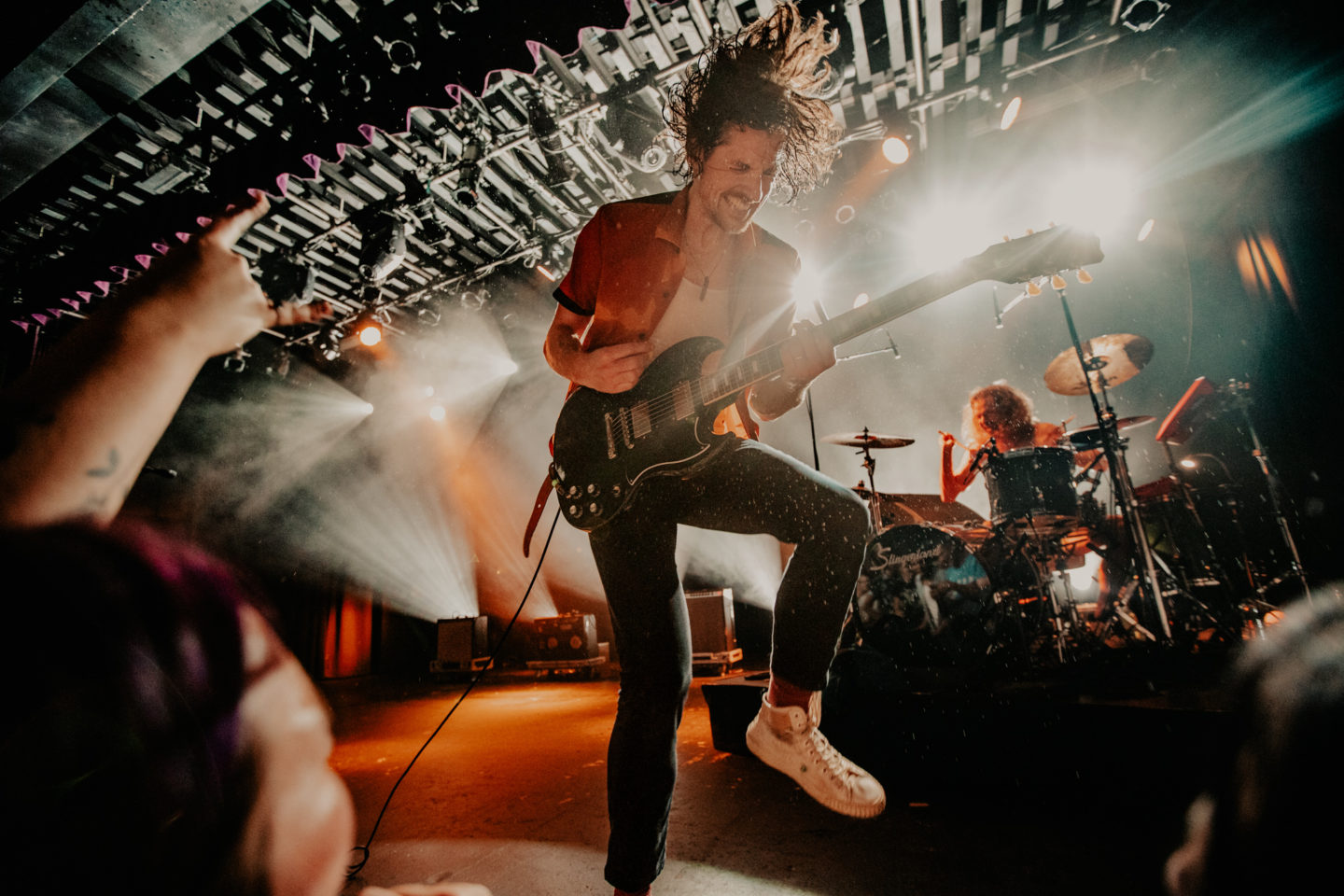 Constraints are usually frowned upon in the endlessly choose-your-own-adventure world we live in. When everything is accessible, it can feel odd to choose less. This is what makes a band from Austin, choosing to only be two people on a stage so dangerous and exciting. Even though two-piece bands have come and gone, the spectacle of seeing two musicians fill a space with little adornment is a thrill, and Black Pistol Fire, throughout their entire set, display that they go above and beyond to be that presence that dominates the room.

Beginning the night, the band entered to iconic Mr. Sandman, a playful way to completely go against all of the rocking that would proceed throughout the evening. As the effects on the guitar swelled they kicked into their first song Hipster Shakes. Instantaneously, the infectious energy of these two unleashed and you could understand why they have made it to this stage. They exploded throughout the venue whether it was in their deep blues-rock pocket or the near thrash punk that they can hit in their songs’ breakdowns. It was this dynamic ebb and flow that epitomized the whole show.

All the energy in the world cannot make a band great, however, and luckily musically Kevin McKeown and Eric Owen show their prowess in full. McKeown has a unique voice that soars across the mix of the action coming through the speakers.  It is crisp and clean, but with emotion and depth. He does not have the standard snarl in so much punk and hard rock, but he has a balanced edge that is hard to put a finger on but fits their southern-inspired rock so well. It is in his guitar that his strong expression rings forth. His riffs hit hard, and back the songs so perfectly, but his improvisation and solos, are awe-inspiring. Clearly, he can fret and pick with great agility, but it is in his slowing down, his bending the notes to infinity and his sustained moments that just make you feel alongside him. No solo is alike, but each fits the song perfectly, and never proceeds endlessly for the sake of soloing; it all serves the general mood and passion of the song.

Owen, however, is not to be forgotten as his drumming is hard-hitting and deliberate. Just as his bandmate, he can show all the flare that he wants, but only does so to back great songwriting, not showcase himself. He knows that he is a member of a partnership, and keeping the emotional rhythm of the song is what is important. At one point, I couldn’t help but hear a bass, but surely that could not be as there are only two members. I came to the conclusion that the duo was playing to a track, but upon switching spots in the crowd I could see that 90% of the time Owen was playing his drums one-handed while keying the bass line on a synth situated beside him. Once again, seeing what these two can do with constrictions baffles and delights throughout the entire concert.

Oftentimes, I will try to make note of the lyrics and the songs that are being played throughout the night to gauge what to write throughout the process, but I kept finding myself getting sucked in and getting lost throughout the night by the music. The head nod, the toe tap, and the all-out dancing, just became a natural extension of what I experienced. I realized that is what I loved about witnessing BPF. They are so engaging that you tend to forget about everything around you. You are locked and dialed into that same frenetic energy that is pushing the two of them to perform.

At the end of the night witnessing the pure adrenaline of Black Pistol Fire, the stage dives, the solos, and the fast pace of all that they do, you recognize that there is a vulnerability hidden behind everything. When only two people come on stage there is nothing to hide behind. McKeown and Owen valiantly demonstrate that they truly can take that mantle and show a crowd what it means to express themselves through powerful sound. It’s nice to see that in the expanse of endlessly edited and autotuned acts, we still have people willing to create real music and share in real experiences.