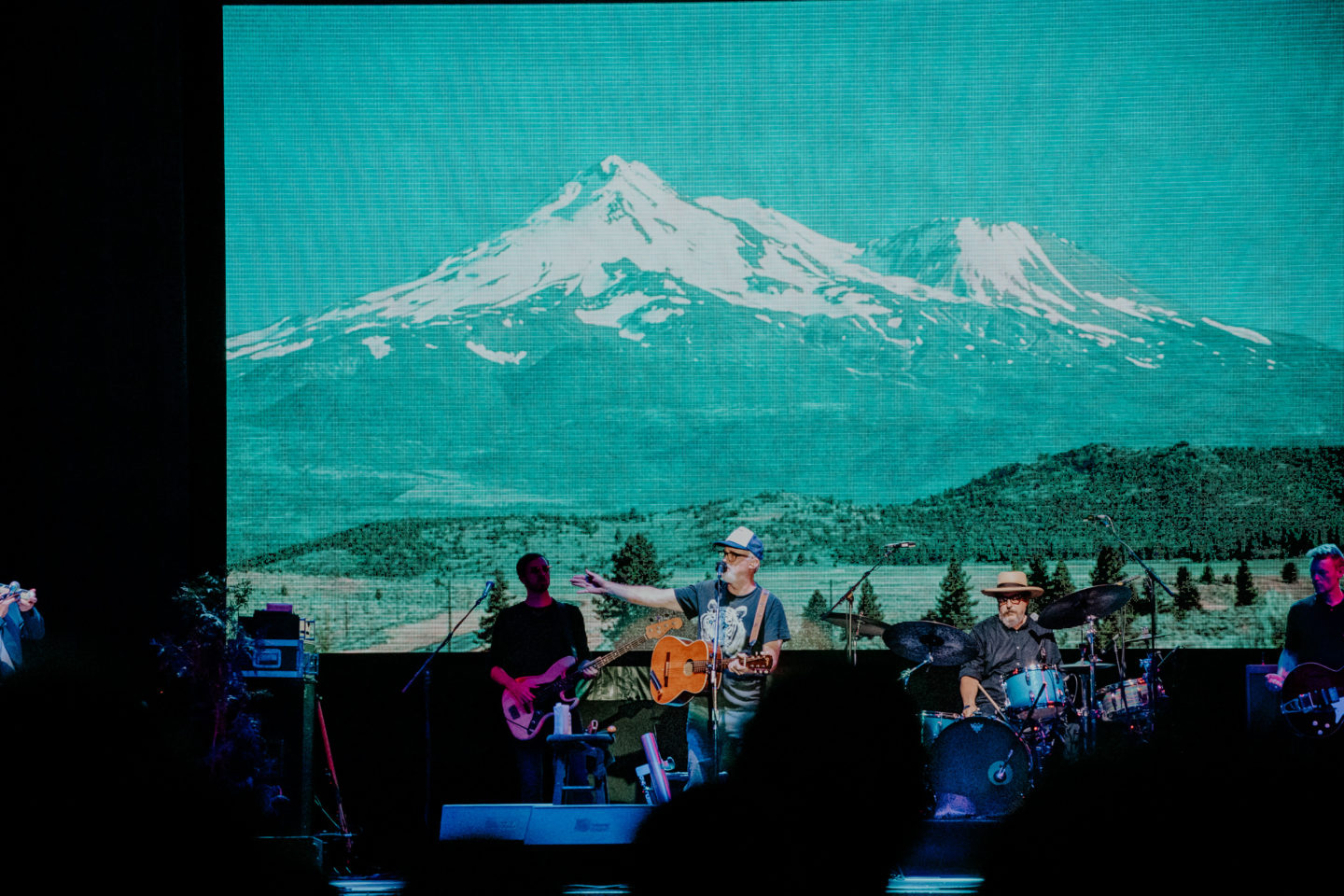 With shouts of glee and terror filling the air at Vancouver’s PNE, the city’s amusement park hosted an evening with Cake. This backdrop of adventurous rides caused lead singer John McCrea to opine, “We argue about everything but thrills. Look at everyone enjoying the rides.” No matter where you come from, or what opinions you hold, Cake hopes that through their music, you may find a spot to enjoy yourself and argue a little less.

With that brief introduction, a slow build of acoustic guitar and melodica began the show. A melancholic start with Fashion Nugget’s opening track Frank Sinatra slowly built on that same theme of “flies and spiders [getting] along together.” It’s funny when you hear music that thematically does what the lyrics express, as Cake has made a career out of creating works that combine vastly different sounds, riffs, and lines into one cohesive unit. The horns, bass, guitar, and drums, all play distinct parts that never muddle each other, and so it was throughout the entire night.

McCrea’s signature singing style was in full force. Floating playfully around the beat, he has constructed a singing style wholly his own. It’s not quite rap, it’s not quite rock, it’s Cake. Throughout the night they ventured through songs that have funk elements, rock elements, and even country elements. Their adaptability and indefinability are what have made them such alternative darlings, and it thankfully still rings through in all that they do today.  The backing of all of this is clearly a group effort. Vince DiFiore’s trumpet soared over the whole venue and matched perfectly with Daniel McCallum’s bass lines that never sit in one place. Xan McCurdy’s crunchy riffs and rhythms help blend all the disparate parts in the unmistakable Cakeness of it all. Yet, all this could not be held together without the heartbeat of the band; Todd Roper keeps everything tight with a playful intricacy throughout the entire performance.

As the night progressed it was clear that Cake was very aware of their biggest hits. They played almost the entirety of their first album Fashion Nugget, making sure to create as many moments for sing-alongs as they could. In these moments McCrea’s crowd work was key to the whole experience. Just like his singing style, his laid-back personality has a curious rhythm and humour. I couldn’t help but feel that he was a jovial mad scientist who along the way found a guitar rather than a death ray. This quirkiness crescendoed when the band brought on stage a western red cedar. A theme throughout much of Cake’s discography is a battle against overindulgence, and this represents their desire to give back and to leave the earth better than they found it. One lucky fan was tasked with its care.  “Do you have a place for this tree? You fuckin’ better!” McCrea called to the tree’s new caregiver. It is these moments that seem so un-rock and roll that make Cake so punk. No, they don’t have a circle pit, and distortion isn’t cranked to eleven, but the ethos of the band is evident in all of the ways Cake doesn’t care what you think about them; they just care for what they feel needs to be cared for.

In the final moments of the night, Cake left it all on the stage with their biggest songs. You only needed to hear a millisecond of the vibraslap (yes, I did have to google that), the signature rattle of Short Skirt, Long Jacket to know that the audience was ready to dance and sing the night out alongside the band. This then transitioned into The Distance which left the audience still burning for more. The encore began, and, due to Vancouver’s curfew laws, only lasted for a moment. The band returned to thank us and send us out into the night with their cover of Black Sabbath’s War Pigs. It was an emblematic end to the whole night to hear these songs that somehow should never work, and yet through the lens of Cake delivered effortlessly. That is the Cake story in a nutshell: a vast array of varying influences coalescing into something wholly new.