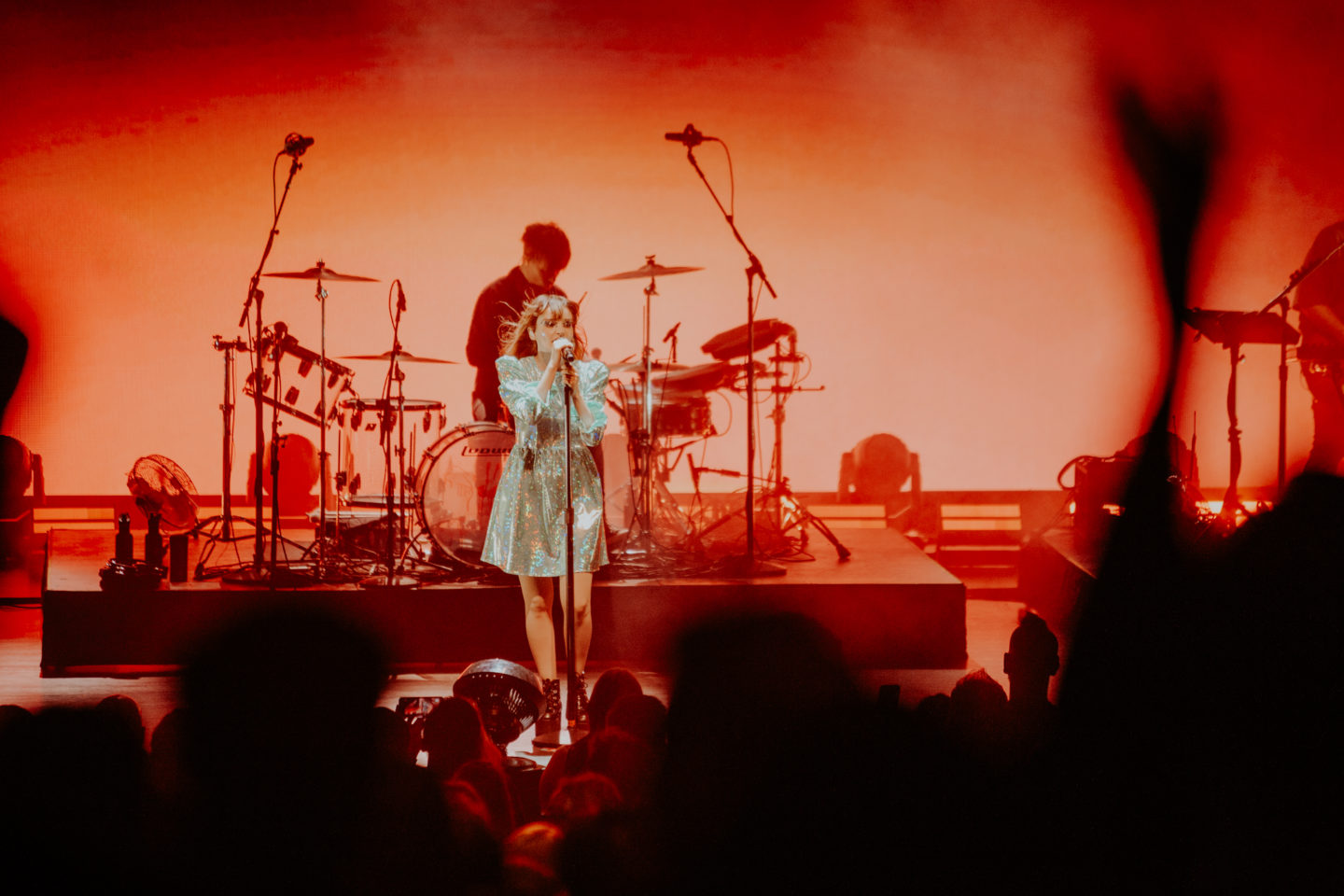 A few friends who know about my affection for dreamy and synthy atmospheric tunes have recommended CHVRCHES to me for quite some time. However, it was Robert Smith of The Cure who got me into their music. Smith both co-wrote and provided vocals for the album version of the song ‘How Not To Drown’, which was released last year. Knowing that Robert is a picky guy and that all bands he agrees to work with are pretty awesome, I got to explore the artistry of the collective, and it definitely struck a chord with me. Getting a chance to experience their live performance, only confirmed my love for the band and helped me discover the thrilling sensory experience that is CHVRCHES.

It was around 9.20 pm on Wednesday night when the mysterious music started playing and the lights of the Queen Elizabeth Theatre dimmed. The crowd immediately got up from their comfy seats in anticipation of seeing the headliner, as I was questioning the venue choice: a  general admission dance floor would have worked much better for the CHVRCHES’ melancholic yet punchy and danceable music. However, over the next few hours, the beauty of the set combined with the aesthetics of the sophisticated Theatre grew on me and I definitely started appreciating the physical space more.

CHVRCHES – Lauren Mayberry, Iain Cook, Martin Doherty  – and the unofficial band member, drummer Johnny Scott, came up on the stage under the bright lights and started the set with ‘He Said She Said’ – the lead single from the newest album Screen Violence. CHVRCHES are known as a must-see live band and a sensory experience, and the brand new Screen Violence theme works perfectly for their stage setup. The backdrop resembled an old tv screen with different imagery projected upon it, and the band playing in front of it looked like a part of the visuals. As an audience member, you became both a spectator and a participant, singing, and dancing while being trapped in this beautiful but disturbing television box. Yet this entrapment felt safe and magical since there is a glimpse of hope even in the saddest CHVRCHES songs. The lights and projectors also create a unique atmosphere and feeling for each song, turning the concert into a series of audio-visual experiences, different for every tune.

Everyone was captivated by the sparkling glossy outfit of Lauren Mayberry, reflecting the bright colours of the stage lights. Throughout the show, Lauren made a few outfit changes, wrapping up with a white ‘FINAL GIRL’shirt (as she sang the eponymous song), and jean shorts combo; for the encore, however, she came with hands and shirt covered in blood: such a significant contrast from her first, bright and happy, outfit. Lauren’s stage presence is fun and charming and her voice, so clear and bright, on top of the synth layers, captivates and pierces you through. She rules the stage, and even though the band stays in the shade during the concert,  you cannot help but appreciate their mastery. All three full-time band members are talented multi-instrumentalists; since during live shows Lauren concentrates on vocals, Iain and Martin can frequently be seen changing instruments – and being incredible with all of them. And it’s right when it seemed that the sensory delight of their live performance can’t get any better!

The bands continued the set by making the audience sing along to a few older songs, such as ‘Forever’ from the 2018 record Love is Dead and Leave a Trace from Every Open Eye (2015). Even though the tour was launched in support of Screen Violence, the band has generously shared the mix of the best songs from the new record and the most beloved older tunes that the audience was happy to sing along to. The charming and endearing Lauren also made a few cute comments about the taste of water, and her outfits, and made the audience clap along to the beat of ‘Night Sky’ and sing the catchy refrain “Didn’t you say that, didn’t you say that” in ‘Never Say Die’.

For the encore, as a cherry on top, the band played a few crowd pleasers: ‘Asking for a Friend’, the opener of Screen Violence, and ‘The Mother We Share’ from the band’s original release in 2013, which Lauren labeled as their “OG OG song”. Despite Lauren’s bloody outfit.  the concert ended on a bright note with audiences dancing and jumping along to their classic tune ‘Clearest Blue’.

CHVRCHES’ performances provide a bright, hopeful, and complete adventure that should be experienced at least once. I am sure that even people who came to the show without being too familiar with the band, became fans overnight.

The Shins at Queen Elizabeth Theatre