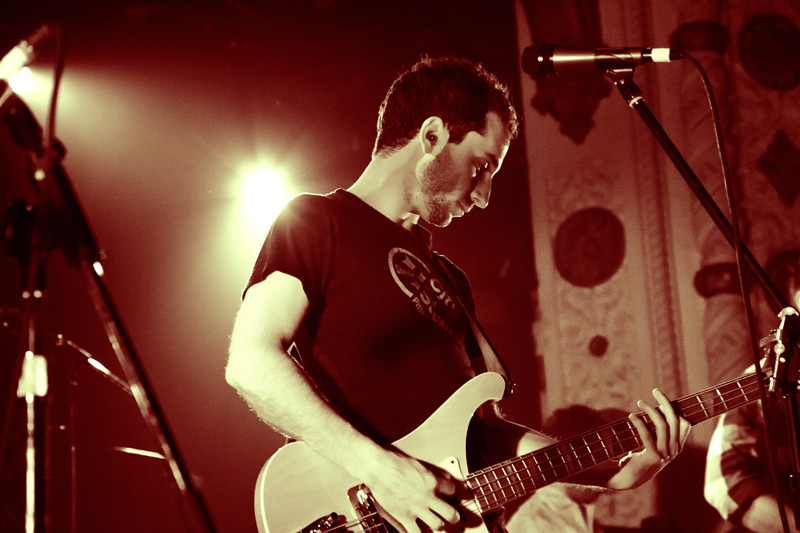 Cobalt & The Hired Guns at Metro

Cobalt & the Hired Guns look and feel like the cast of Not Another Teen Movie and are strongest when they sound like they’re trying to create a soundtrack for such a flick. CATHG “take us there,” as their song “Of Summer” beckons, to a time when we were all a little younger, a little giddier and a little bit more carefree. Evidently, these guys have known each other since those stages in life. They’ve bottled how it might feel to get the old gang back together for a night and deliver it with the spunk and fun accessories of a high school variety show, only one that’s fit for the Metro stage.

Drummer, Jesse Alexander, resembled an adult version of Alfalfa, complete with shorts, bow tie, suspenders and a propeller hat taking the place of requisite cowlick. The cellist perched a glowing barrette, which might actually have been a Nite Lite, on top of hair that can only be described as Maraschino cherry red. A darling backup vocalist bounced in solidarity with her band mates when she wasn’t singing and slipped on some sweet neon pink sunglasses.

The group felt so warm and inclusive. With 11 people on stage, I imagined founding members, marching down a hallway lined with lockers, (in real life it was the Oberlin College campus) recruiting their Hired Guns and each subsequent member bursting out of a classroom with an instrument, joining the parade. The more the merrier! They keep most lyrics consistent with their youthful narrative. “Like You Like Me Like Me” sums up, so simply, that delicious threshold of whether a crush is just a crush, or something more.

The heavy influence of bands from the ‘90s and early 2000’s fuels Cobalt’s sound. The horns blared reminiscent of Reel Big Fish. Vocally, you can hear the Postal Service right down to the Jenny Lewis back up. Blink 182, Less Than Jake, and even a little Relient K came to mind. However, obvious references aside, even before the “Obla Di Obla Da” encore, it was evident that this group had listened to the classics, as well.

Everybody Wins. That’s the name of the album CATHG was celebrating that night. What a perfect sentiment for a band who appears to have been inspired by music from so many eras and who have incorporated their friends’ talents and spirit. At the end of the show, a devoted fan group in the audience launched long stem roses that soared much like lawn darts onto the stage. I’m actually kind of surprised they didn’t break into a cheer.