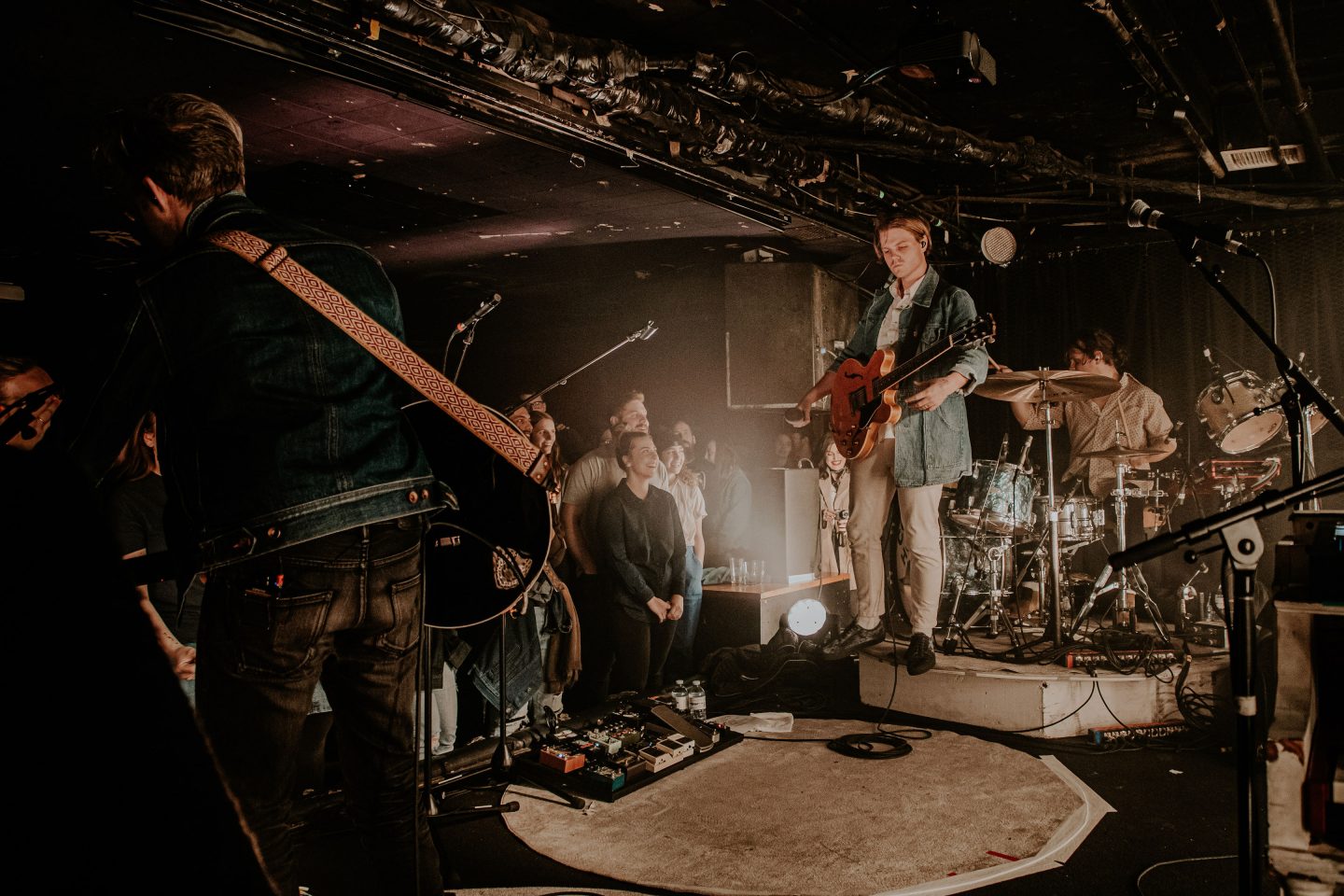 They came out with the lights low and the sound building for almost a minute before they entered, the only thing visible was a banner with “Leave What’s Lost Behind” and their silhouettes as they took their places on the small stage. They exploded with their big sound and deep vocals in a favourite from their latest album, Looking for Some Light. Halfway into the first song, lead vocalist Caleb Chapman was already making his way through the crowd (one of two he would take that night). The drums shook the room and the crowd’s fists were pumping through the air as he sang side-by-side with them, his presence infusing us with the comradery of a last song but the electricity of a first. It was going to be a good night.

Colony House is a Tennessee-born band formed around 2009 by high school friends and two brothers, Will and Caleb Chapman. With three albums under their belt, the rock and roll band has been relentlessly touring the past few years and opening for bands like Judah and the Lion and Needtobreathe. All of it has created a decent name for them across the U.S. and in Vancouver and has seemingly taught them how to really show up for a show.

Despite being a Tuesday night in one of the smaller venues in Vancouver, the band brought big stage feels from the get-go. The show was fully lit despite the intimate space and the band brought energy to every song, most of which the crowd knew by heart.

Lead vocalist Caleb Chapman did not let down with his deep notes and smooth transitions.

He danced through choruses and pulled the crowd in between songs, his voice humbly lined with the gratitude of hearing his lyrics sung out by strangers.

He was lifted even higher by his guitarist, bass, piano, and, to my delight, drums.

Set up on the side of the stage in a very counter-band-culture-form, drummer and percussion Will Chapman carried an electric amount of energy that caught attention almost more than the lights and jumping guitar players.

His whole body swung to the beat, slapping symbols with his hands and at some points, drumming the pipes that lined the ceiling above him.

It was in Leave What’s Lost Behind that I suddenly realized why I personally loved their music so much—drums held just as much drive as vocals. It was at this point that I texted our photographer to take lots of photos of the drummer because he was my new-found hero.

As the night went on, the rhythm of their songs showed off their years of practice on the road.

They built people up with just enough songs of celebration, slowing down with a medley of their classics, and then perfectly bringing the crowd back up with their flag-raising song, Where I’m From.

The most impressive part of the whole night was that they brought everything to the floor and in turn, the crowd did too—I could see it in the tears of the girl in front of me. Granted, it was right after Chapman stopped to hug her as he ran through the crowd but all to say, if Colony House can deliver like that in an intimate venue on a Tuesday night, I’m ready to party with them in a colosseum.