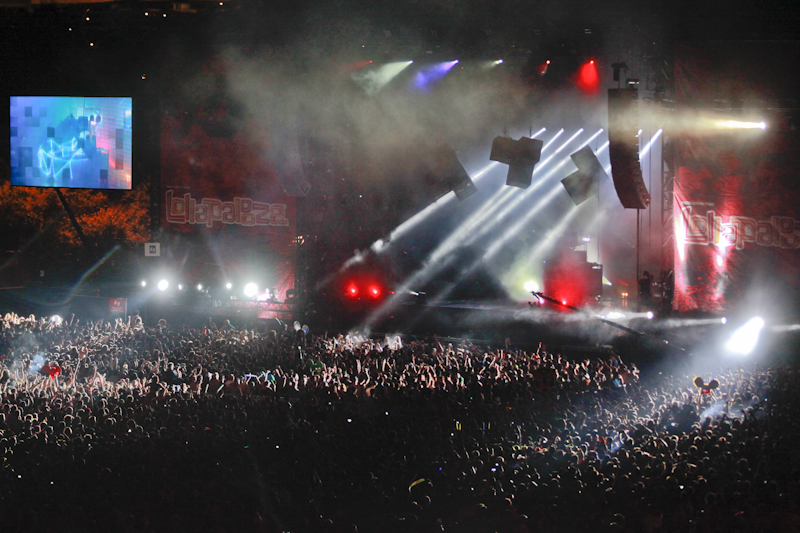 Mud, masses and one talented mau5; Lollapalooza 2011 ended the weekend with a show that truly delivered. After two sudden downpours, many concert goers found themselves huddled under anything that would provide shelter while the rest were busy using the lakes of mud as slip ‘n’ slides. It almost seemed like everyone forgot what they came for; live music. When 8:30 finally came around though, you couldn’t just hear the music, you could feel it anywhere inside Grant Park. From start to finish, deadmau5 put on a show so stimulating, you forgot where you were or who you were with.

Not only did the infamous LED mau5head make a welcomed appearance, but Sofi Toufa also graced the stage for an aggressive and energetic live performance of “Raise Your Weapon”, “Sofi Needs a Ladder” and “One Trick Pony”. The visual of Sofi, draped in a metallic hooded wardrobe – with deadmau5 lurking above from his cube – along with the bright, flashing lights all around, was almost more than you could handle; in a good way. The spectacular performance from deadmau5 was loud and beautiful for every second, most certainly during “Strobe”. The song flowed from electronic ecstasy to mellow melodies and fell in beautifully between Sofi’s performance and the epic finale of the cult-hit “Ghosts ‘n’ Stuff”. There were dozens of multi-colored strobe lights, smoke everywhere and bass so big you felt it vibrate all throughout your body – all while deadmau5 was dressed as a ghost.

From the downpour of rain and an unexpected guest performer to the wildly chaotic light show deadmau5’s unparalleled music artistry was undeniably one of the best acts of Lollapalooza 2011. If you saw him, you probably would say “the” best. His set was a complete and full sensory overload, both musically and visually.