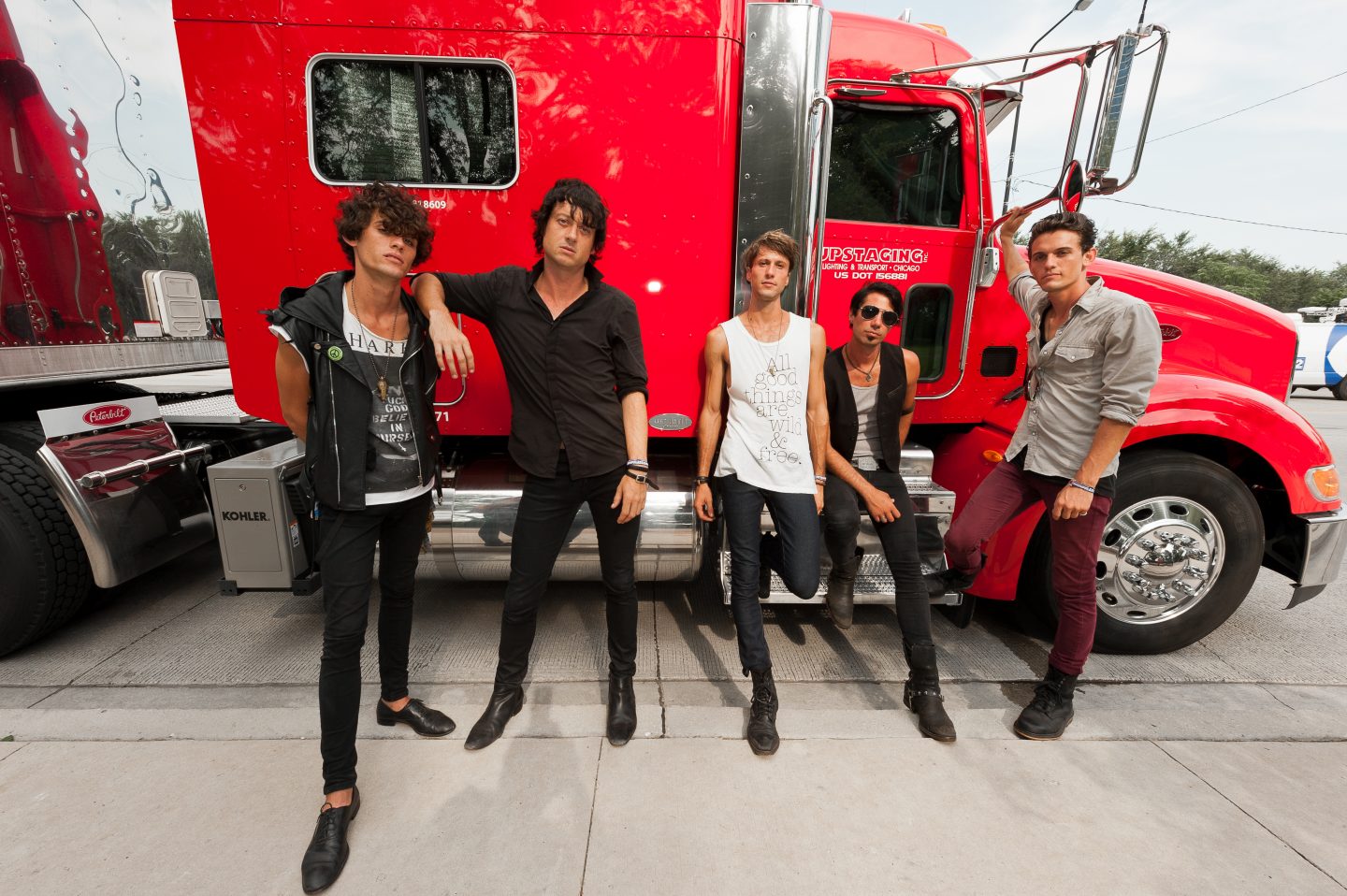 With collective good looks, modern rock style and undeniable passion, the five guys of Austin-based band Electric Touch would be worthy of a spread in any magazine. Add to all this that they are being mentored by one of the music industry’s most successful concert promoters, and a famed path seems imminent. After a series of big music festival appearances, the lads round out the list as Lollapalooza 2011 artists. Hours after they rocked the BMI stage to a loving crowd, Lost In Concert chatted them up about where they’ve been and where they’re going.

A quick introduction to the band goes as follows. You’ve got British lead singer, Shane Lawlor, in the company of four Americans; Isaac Strycker on keys and back-up vocals, who looks like he should be the next face of an Armani campaign; Portland Musser on bass, whose real name is not Portland but he somehow embodies it like a personal brand; and twin brothers Louis Messina Jr. (drums) and Christopher Leigh Messina (lead guitar), who each carry themselves so differently that you may even miss they’re identical.

Electric Touch, signed to Island Records, has already played SXSW, Bonnaroo, Warped Tour, Austin City Limits and the list continues to grow. When music lovers attend different festivals, each event becomes known for offering a different vibe or experience. One might wonder if it all feels the same on the other side of the stage – or if the artists performing can feel the difference too. “They all feel very different, actually,” says Lawlor with that beloved British accent. “We always aim to do our best we can possibly do and give everything we can to put on the best show possible – so that doesn’t change, but every fest does feel a little different. Lollapalooza is one of the most beautiful festivals in the world – right here in the middle of Grant Park with this beautiful backdrop, and the audiences in Chicago are always amazing.” That warm midwestern embrace was apparent after the band’s set on the BMI stage just hours before. Fans flocked to the guys after their set, who made themselves available to the crowd in front of the stage to take photographs dripping in sweat with smiles on their faces.

The band’s take on both why and how they do this is refreshing. “We’re not making music for people in penthouses, to be honest,” says Lawlor. “We’re making music for average people and real people who have problems and want some escapism. We don’t wear loads of makeup on stage or put on fishnet tights. We’re just real – and we’re not trying to impress rock and roll stars. It’s people in the audience we want to impress. And we want to take it all the way to the top.” With a hunger for success and a vision of what that takes, their passion translates as unstoppable. Lawlor makes direct eye contact when he says these words and it’s clear there is no messing around when it comes to where Electric Touch is headed.

In addition to having their eye on the prize, the guys also have a secret weapon that any rising band would kill for; the mentorship of Louis Messina, a highly regarded concert promoter who has had a hand in the success of some names you’d surely recognize. “He basically helped develop Taylor Swift from when she was 12 or 13 to the star she is now, selling out stadiums every night,” says Strycker. “Helps us to understand the expectations he has of us.” Starting off a band with Messina in your corner is like being dealt pocket Aces in Texas Hold’Em; the odds are in your favor. It’s no typo that this band’s mentor shares the same surname as the drummer and lead guitarist. He’s father to the twin musicians, so if it’s at all possible that Messina Sr. could be even more invested in the success of an act than he has thus far, this would be the case.