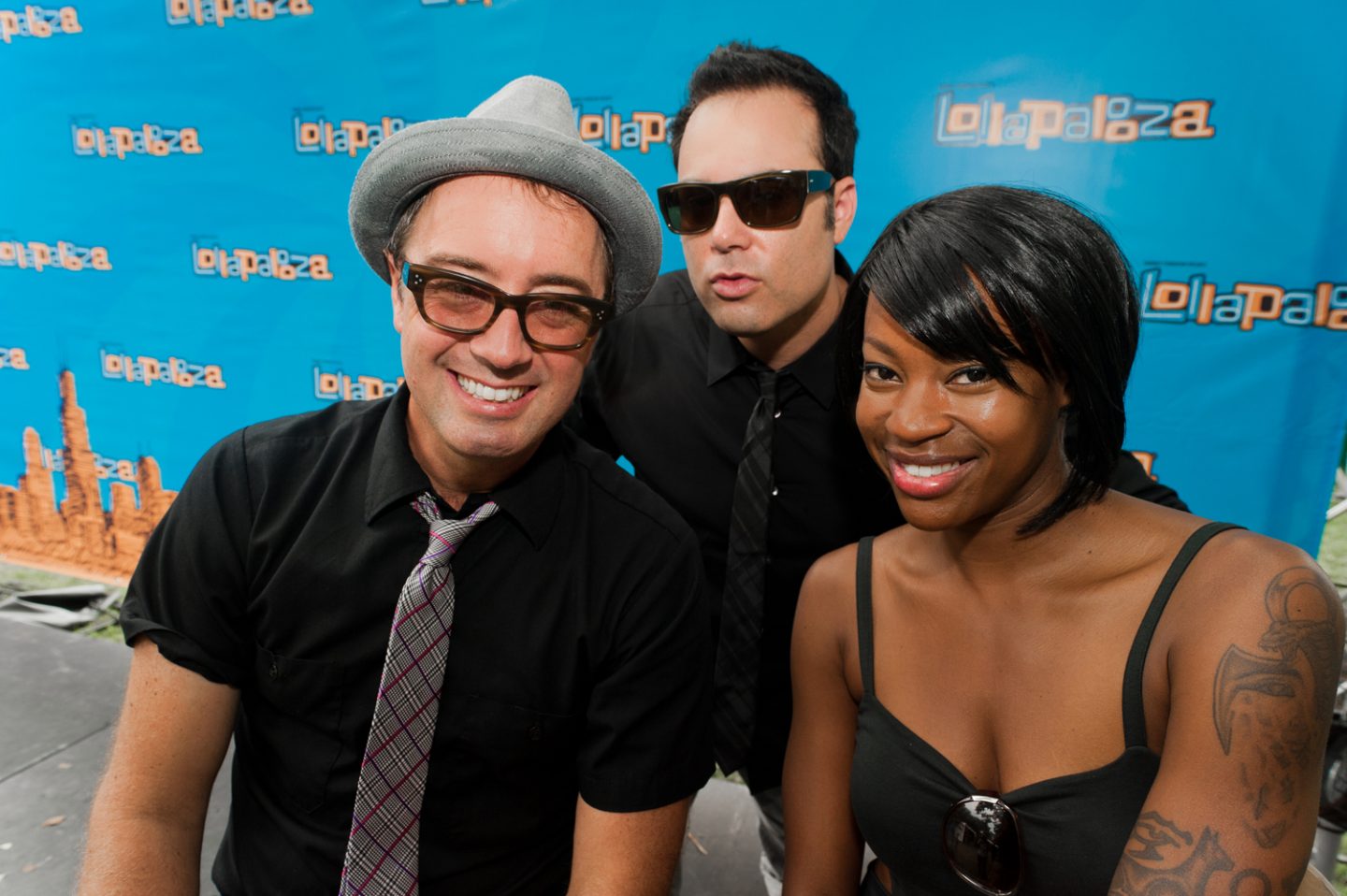 When Chicago last saw Fitz & The Tantrums, it was for a sold out show to an overjoyed crowd at Metro. Word got out about their uplifting music that spins a modern twist on soul – and resulted in a fantastic flock of fans at the 20th anniversary of our city’s largest music fest. On the same sunny day as their Lollapalooza debut, Lost In Concert sat down for an interview with three band members to hear about fast-tracked success and why they have nothing but love in their hearts for Chicago.

Noelle Scaggs (vocals and percussion), Jeremy Ruzumna (keyboards) and John Wicks (drums and percussion) are essentially 3/5ths  of the endearing “Tantrums”. First things first, let’s address the tremendous growth this six-piece group earned in just a year’s time since the release of debut album Pickin’ Up The Pieces in August 2010. Live performances on the late night TV show circuit; sold out shows in cities they had never been to before; an invitation to play Lollapalooza on one of the main stages – all a rolling snowball of growing success after their very first studio record.

“We’ve been fortunate that we’ve had a lot of serendipitous moments,” says the lovely Scaggs. “It built so fast that we haven’t had a chance to breathe. We all definitely feel very fortunate that we’ve had the opportunities we have had in such a short period of time because we’ve all been in the game for so long. We’ve all played with so many people that it’s a beautiful experience to grow your own thing and have it be accepted.”

Accepted indeed. From TV show promos (“Desperate Housewives”) to movie soundtracks (Friends With Benefits), it seems like the infectious sounds of FATT may be taking the nation by storm – and Chicago has been on board that love train from the get-go. In February of this year, the band’s first ever performance sold out every inch of space in the house at Metro. It was a captivating show that left an impression on the band as much as it left fans wanting more.

“Moments like the amazing reception at Metro here in Chicago were so epic and strong that we couldn’t believe it,” says Scaggs. “We’ve had a few of those moments where you just feel like you’re being elevated off the stage and that was one of them.” Drummer John Wicks echoes that same sentiment. “We all know, because we’ve been doing this a while individually, how rare this is. When we have experiences like that show at Metro, we really appreciate it.”

– Of all the late night TV show green rooms, George Lopez has the winning hook-up for this group; a tequila bar. (The massage chair at Conan’s was a close runner-up!)

– Noelle has the hots for Dwayne “The Rock” Johnson, who was a fellow guest for one of the late night shows for which they performed. “I got to touch the arms of The Rock and THAT is something to be SAID, ladies.”

– Keyboardist Jeremy Ruzumna says that Taylor Swift was a total sweetheart. (No surprise there, but another brownie point in the public eye for Taylor.)

– When playing “Would You Rather”, both Jeremy and John would rather have to walk backwards the rest of their lives than be covered in scales from head to toe. Noelle opts for scales because she can rock them out like an accessory. Obvi.

Back to the Lollapalooza topic – later that night, the band played an official after party at Schuba’s that sold out six minutes after tickets were released. As a music lover and avid concert goer in Chicago, I have seen dozens and dozens of shows at Schuba’s – and never have I seen that wooden room worked inside out and upside down as in Fitz and The Tantrums fashion. On stage they are impassioned, tenacious and dazzling. Off stage they are humbled, kind and warm.

It’s no surprise this band has jumped into the current of mainstream popularity so quickly – because it’s not just their music that hooks you. It’s their vivacious spirit – and the way they verbally invite you to feel what they feel when the music rises. You want to root for them, rejoice with them and Good Lawd – you just want to get down with ’em.