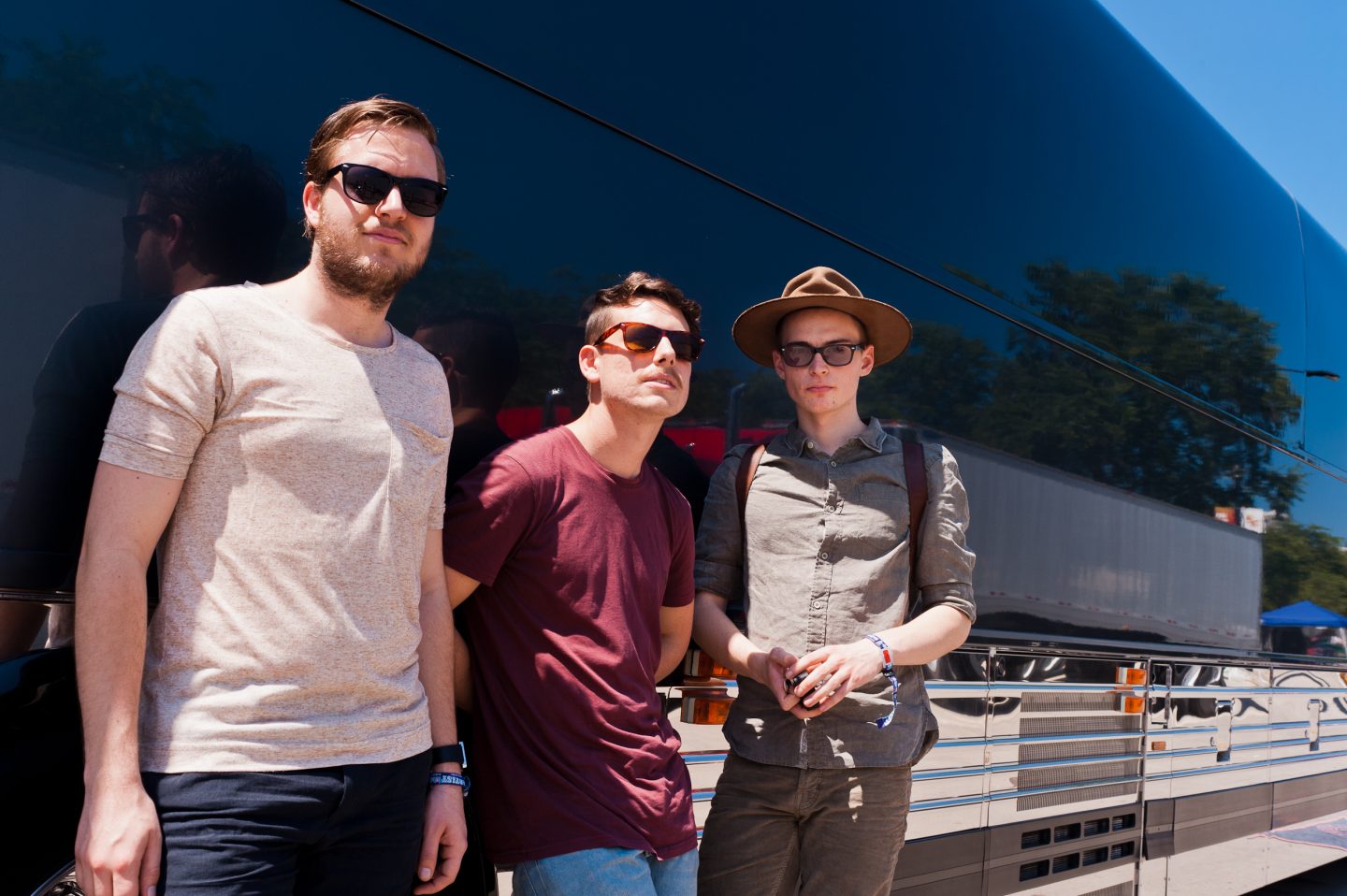 If you like the idea of a more upbeat Fleet Foxes, meet Boy & Bear. This indie-folk band of five hails from Australia and delivers songs peppered with banjo, mandolin, keys, beautiful guitar riffs and lush vocal harmonies. A few of the guys joined Lost In Concert to talk about their music, praise the magic of Lollapalooza and share some laughs.

Frontman Dave Hosking (lead vocals / guitar), Killian Gavin (vocals / guitar) and Jake Tarasenko (bass) are sitting comfortably in the grass under the shade of trees on a gorgeous Chicago summer afternoon. They seem happy and relaxed, without any hint of anxiety about the crowd they will be playing for at the Lollapalooza BMI stage a few hours later. In fact, if there is such a thing as festival zen, these guys have seemed to achieve just that.  They’ve encountered the same enchantment of Lollapalooza that attracts thousands of people every year. “Last night we were at the fest watching My Morning Jacket. Twilight was happening, the band was playing, the city is all there. It’s a pretty amazing sight,” says Gavin.

The band’s first EP With Emperor Antarctica brought us well crafted melodic and impactful songs like “Mexican Mavis”, “Rabbit Song”, and “Blood to Gold”. Behind Ray-Ban’s and unavoidable dimples, Hosking explains how the foundation of those songs differs from those on new album Moonfire. “The record we just did, Moonfire, is a lot more narrative; the writing is a lot more storytelling. Reflecting on With Emperor Antarctica, it’s sort of a lot more theatrical and fictional – and it has a dark undertone to it,” he says. “It was definitely less directly taken from my life. It was just language and ideas that fascinated me that I kind of threw into this big melting pot.” To be specific, Hosking describes a song like “Mexican Mavis” as “just this dark twisted fantasy or something.” The music came first for songs on that record and lyrics came second, which were gradually woven in to complement a theatrical tapestry that would later inspire creative music video treatments as seen for tracks like “Rabbit Song”.

In addition to a new album under their belt, Boy & Bear has a couple other notable accomplishments to mention. In 2010 they supported Grammy nominees Mumford & Sons for the Australian leg of their tour (Tarasenko also played bass for Laura Marling, who was dating Marcus Mumford, which eventually led to the connection) and they were invited to be part of a tribute album to songwriter Neil Finn that allowed them to cover Crowded House’s 1991 hit single “Fall at Your Feet”. It was quite amusing to hear the band’s own account of how that specific song ended up being the one they covered. They outright laughed when asked. Did they choose it? Was it suggested to them? The world may never know. “We’ve had this discussion before and it’s been this baby fight between us saying. ‘No, it was like this’ and ‘No, it was like that,'” explains Gavin in his thick Aussie accent. They proceeded to poke fun at themselves for being petty about who had the right account of what happened, each going home to hunt down emails that would prove he was in the right. With laughs all around we came to a resolution. “We were invited to be part of that record and then how we came across that song is a mystery to us all,” says Hosking in surrender with a smile.

Beyond their music, the guys opened up about what it’s like to work with each other. Says Gavin about Hosking, “Dave is really open and really pushes everyone to be a part of the creative process. It’s good to have a band where everyone can be equally as free.” (Boy & Bear originally began as Hosking’s solo project but additional band mates were brought into the fold over time.) Throughout the interview, Hosking and Gavin were most vocal but it was time for the attention to shift to Tarasenko.

“Jake is probably the most ecclectic and left-of-center person in the band and at times borderline weird – but that’s the best part of his personality,” says Hosking. “He has the most weird and wonderful ideas in songs and that’s a strength of his,” he added. Jake’s response: “You know, he’s painted it really nice to say I have ‘weird and wonderful ideas’. It sounds amazing, but they just rip shit all over me when I say things, like ‘where the hell did you come up with that crap idea?!’ That’s really how it goes down!”

Laughter erupted all around and the three down-to-earth band mates shined as the playful people they are and the merry brothers they have become.