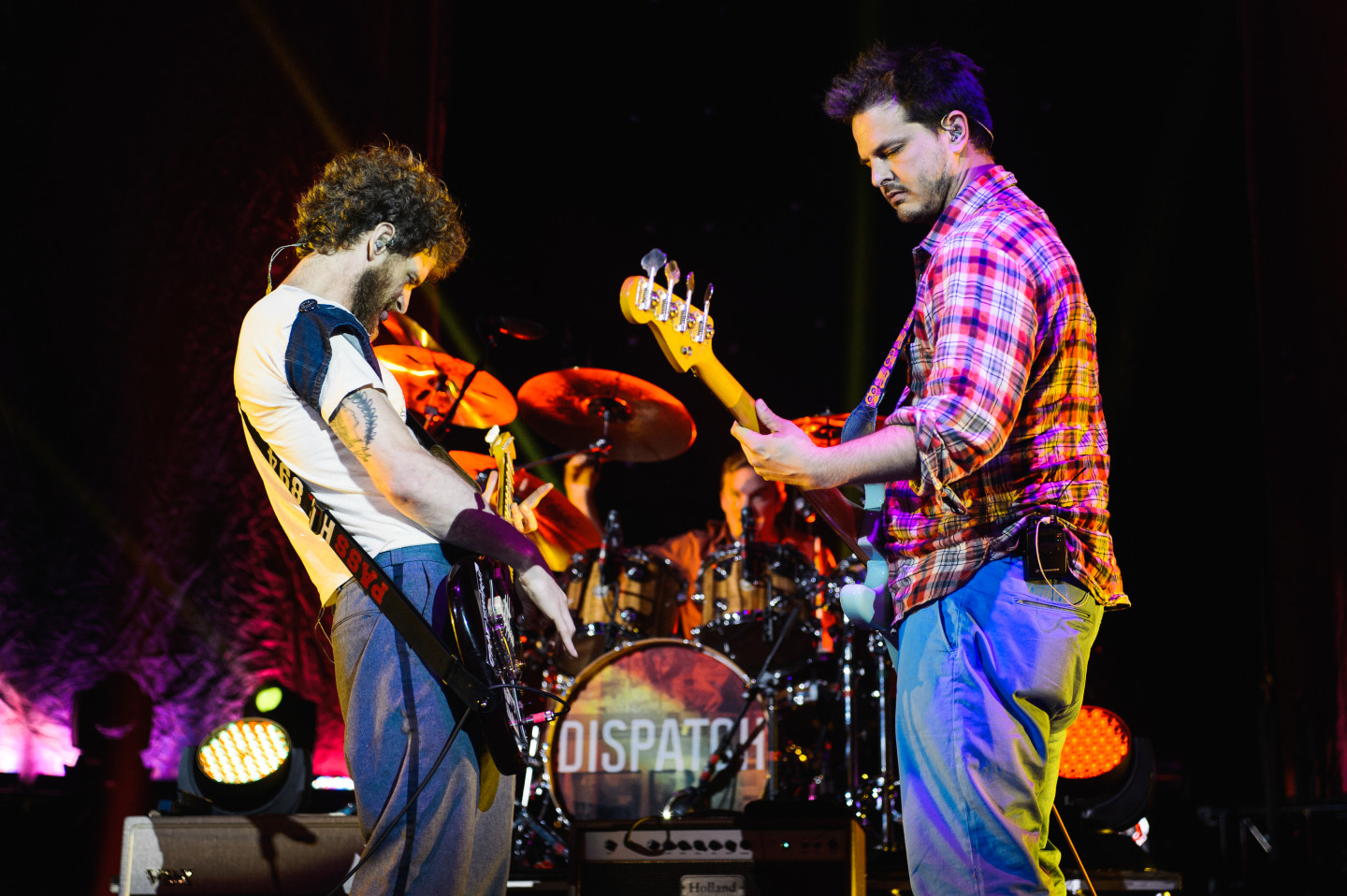 The show was supposed to be outdoors. The ideal situation would have included music filling our ears, sipping a cool beverage as the sun set on a warm June night. What did we have? A rainy Chicago day and a concert relocated to an arena due to outside forces. Off to a roaring start. However, the scenery was quickly a moot point as the roar of the crowd rattled my ears inside the UIC Pavilion once the trio walked across the stage. Chad was rocking the left over material from Brad’s jean hem job pinned to his shoulder by our very own set of buttons. And yes, Pete was wearing Brendan’s shoes he acquired during the great 2013 shoe trade off after an interview we had with the guys prior to the show. You can say a little bit of Lost In Concert was up on stage that night.

The crowd did not let the venue’s atmosphere change their moods. The lights from behind the stage illuminated the crowd in front of me revealing all the tell tale signs of an outdoor festival. A tightly packed front displayed hands held high, waving slighting out of tempo from the music. In the back open areas allocated for fans dancing in circles, arms extended like airplanes. Location be damned! The smell of a peace pipe, wait what am I talking about…the over powering smell of peace pipes circulated the air. The party was not going to be put on hold because of crummy weather or being vacated from an outdoor venue. The tone isn’t set by where we are. It’s set by the musicians who can congregate an audience. It’s led by musicians that control the pace of the night through highs and lows. Through vocal breaks, guitar solos, textural changes, and visual stimulants.

The complete performance of their song “Passerby” evoked all the makings of an unforgettable live moment. The song grooved hard throughout every vocal harmony and rhythmic guitar strum. You couldn’t help but close your eyes and nod along. Yes, that’s exactly what I did for a while. If you were there I know you did too. When my eyes were open everyone around me was dancing around like they couldn’t see. Well maybe it was the booze, but regardless dancing and head bobbing were surrounding me. Then the guitar solo started. With a few melodic riffs the drum set’s hi-hat started opening a little bit. Energy built and a wall of sound was forming. The three of them, who were all on stringed instruments for this one, started congregating in the middle of the stage. Now in a circle, I can feel the crowd in full Mount Vesuvius mode.  No more swaying, no more drunken dancing. People are jumping and eating up every second of this. As the final chord is strummed the fans erupt. There is no souvenir you can take home like a memory like that. Concerts can be fun or enjoyable but often all anyone remembers is the first song, last song and if there was that “holy shit” moment.  Holy shit.

From top to bottom Dispatch had the crowd eating out of the palm of there hands. It could’ve been leading the crowd in a call in response, or as simple as getting the crowd to clap to the beat. Which by the way, how can so many people be terrible at that? It’s not very difficult. But I digress. It was quite the day for Chicagoans. The Blackhawks won game one of the Western Conference Finals, and Dispatch rolled through good vibes blazin’ to keep the party going.