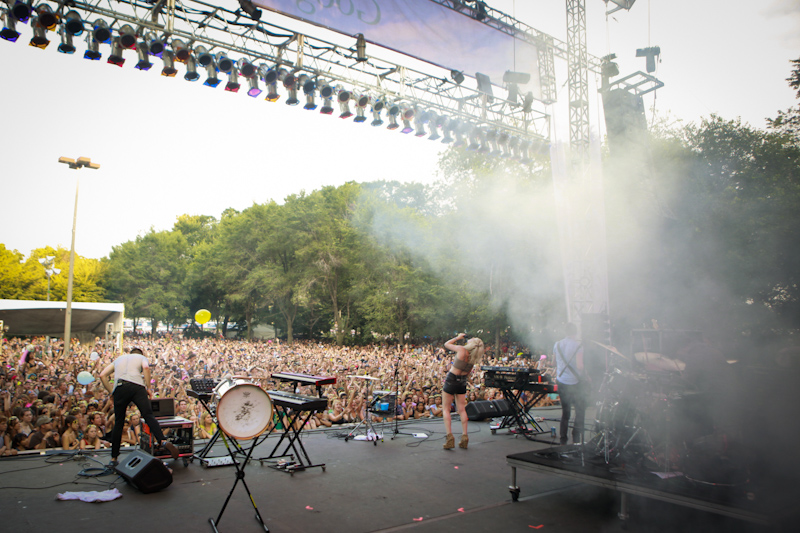 For the petite blonde British doll that she is in person, Ellie Goulding is kind of a big deal. Currently at the top of the charts in the U.K., she is on her way to take the U.S. by storm. To give you an idea how bad-ass talented she is, she was personally invited to perform at the wedding reception of Prince William and Kate Middleton in May. That’s right – the future King of England could have requested virtually any artist on the face of this planet, and it was Ellie that received the honor. If you caught her perform live at Lollapalooza 2011, you’d understand why.

With her delightful accent and signature voice, she owned the tree lined Google+ stage at Lolla this past Saturday. Without question, the first thing anyone noticed was her lily white bare mid-riff. Her porcelain skin is so very white – but her style is so feminine and edgy that she manages to make “ghost” look like the new “tan”.

Inimitable fashion sense aside, her performance of songs like “Guns and Horses” and “Lights” had everyone entranced. Fans were climbing trees to get a better view of her on stage. At one point she remarked that she loved the audience because she felt like everyone was looking at her. Well duh, Ellie – they’re all here to see your fine self. And goodness, no one who witnessed her move her hips and roll her body to songs like “Salt Skin” could question why. You really don’t see it coming, actually. She stands up there small in stature, marrying breathy vocals with powerful singing – but mainly comes across as ultra feminine and vulnerable. A hot second later, she’s moving her body as this empowered and sultry minx. It’s quite beguiling, really and it’s her ability to flip that switch that keeps people intrigued. She appeals to the party goer in all of us because she can energize a dance floor – but with equal finesse, she can stop time with the naked beauty of her voice. As a result, she feels like the friend you could get wild with one night and whose shoulder you could cry on the next.

It must be stated, however, that Goulding’s Lollapalooza performance was not just special because of her. It can’t go unmentioned that there was a hilarious and ridiculous display from one fan that rivaled the effect of streakers at a high school football game. Around the middle of her set, one very ballsy female wearing star-shaped sunglasses managed to get past security, climb on stage and dance all around Ellie. When a security dude tried to grab said ballsy female and take her off stage, homegirl would run around in the opposite direction, using Goulding as the monkey in the middle. This chick was bouncing around like a bunny and waving her arms like a whackjob as Ellie stood there wincing to avoid human contact. It was actually rather amusing and not at all scary because it was clear the girl was being a clown – but still unwelcome. Crazypants McGee eventually was removed from the stage – but she CAME BACK and managed to get on stage AGAIN a second time later in the set. (Methinks somebody in security lost their job after that one.) Mind you, Ellie had a microphone in her hand and was in the middle of lyrics as this entire thing was going down. She did a remarkable job of appearing mostly unaffected and never missed a beat.

Moving onward and upward from the stage-crashing mishap, Goulding closed the set with her hit song “Starry Eyed” and left everyone wishing for an encore. Bravo to you, Ellie. Chicago hopes to host your talent again in the near future. And no worries – we’ll make sure there’s extra security next time.

Grace Potter & The Nocturnals at Lollapalooza 2011