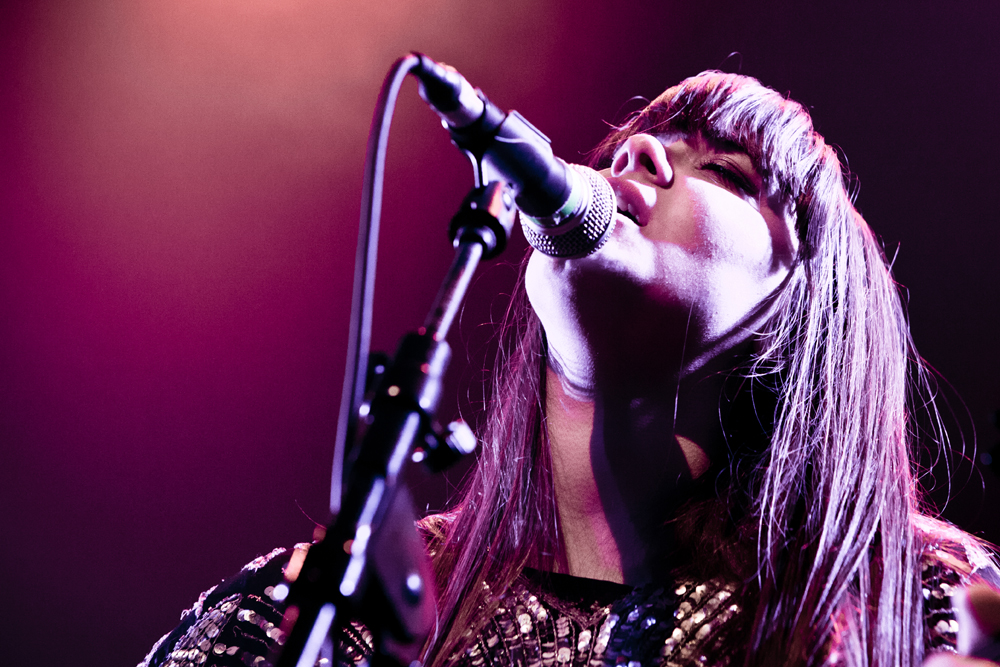 With enough hair between them to supply Locks of Love for a full calendar year, Swedish sisters, Klara and Johanna Sӧderburg, walked onto the Lincoln Hall stage abruptly, illuminated in silver sequin tops. Shimmering more like a school of minnows rather than campy bachelorette party bridesmaids, they began, starting with “This Old Routine”. They played a near complete shuffle of their recent release, Lion’s Roar, and sprinkled in favorites from their 2010 release, The Big Black and The Blue. Take equal parts: gorgeously textured harmonies, honest emotions and simple lyrics, and you have yourself a recipe for most of First Aid Kit’s astoundingly beautiful songs. Sensing no labored effort, their performance was positive and energized, despite the content of their songs dealing with what can seem like a heavy load to some. The tempo of the performance was varied and fluid. Some songs felt like a lullaby. Others made you want to grab a friend’s hand and skip. Or follow the girls’ lead and have a good old fashioned head bang.

Blinking through a blunt fringe of bangs, Klara sang and played guitar unwaveringly with grace and calm. She made purposeful eye contact with individual members of the audience and nodded at them with a kind and knowing smile. The elder of the two, a very tall and slender Johanna, was wonderfully wobbly on her own legs. She would have an awkward millisecond, and then snap back almost immediately to determined confidence. She would open her eyes widely, grit her teeth and assault her keyboard. She would swing her thick, long hair, flip her head up and contort her face into a snarl of conviction and raw emotion. Klara’s voice, clear and smooth, saturated the venue, filling every cranny.

Roughly ten songs into their setlist, the girls asked the audience if they would like to participate in an experiment. Responding affirmatively, the crowd began to stir. Totally unplugged, Johanna and Klara walked to the very tip of the stage. Then, they said the only way the experiment would work is if we could be completely quiet. After a few initial nervous giggles, a long and penetrating hush fell over the two-story venue. Strumming the first few notes of “Ghost Town”, Klara began to sing slowly and both girls swayed encouragingly towards the crowd, beckoning us to sing along. Having a shared experience is one reason we go to concerts. I can say, with very little doubt, that the immensely powerful combined energy created at that moment was felt by every person in that room. In perfectly inharmonious harmony, the whole place sang (or at least mouthed) the words to “Ghost Town” together.

More often than not, First Aid Kit’s lyrics deal candidly with matters of the heart. By turns, they dredge up old aches and address fresh wounds. They give gentle permission for anger or sadness. They remind you of why you loved someone in the first place, too. They tell stories of moving on, explaining how they have done so themselves. They nudge you to forgive. Their songs seem to almost swaddle and soothe. They also have the ability to sweetly galvanize and inspire. I am aware that my take on their songs is personal and colored by my own experience. However, unexpectedly, these interpretations were bolstered when the girls asked the audience to come talk to them after the show. With a little laugh, they sincerely requested, “Please come talk to us. If you’re having any troubles, any problems…we want to hear about them”. They smiled, looking at each other and gave the audience a chance to chuckle. Klara concluded their offer by saying, “We’ll be your first aid kit.”

Using music as a vehicle for healing is not a new concept, but these girls do it with a humble authenticity that can so often feel contrived and stale coming from more seasoned performers. While confident and polished, there wasn’t so much as a glimmer of detectable ego in First Aid Kit’s performance. Chalking this effect up to youth sells them short. No metric exists for how and when people go through the gamut of emotions and experience; similarly, none exists to determine how and when artists grow. I think what makes these sisters so gifted is inherent and cannot be learned. That said, I was blown away by seeing and hearing First Aid Kit during what I hope is a nascent stage of a long and successful career.