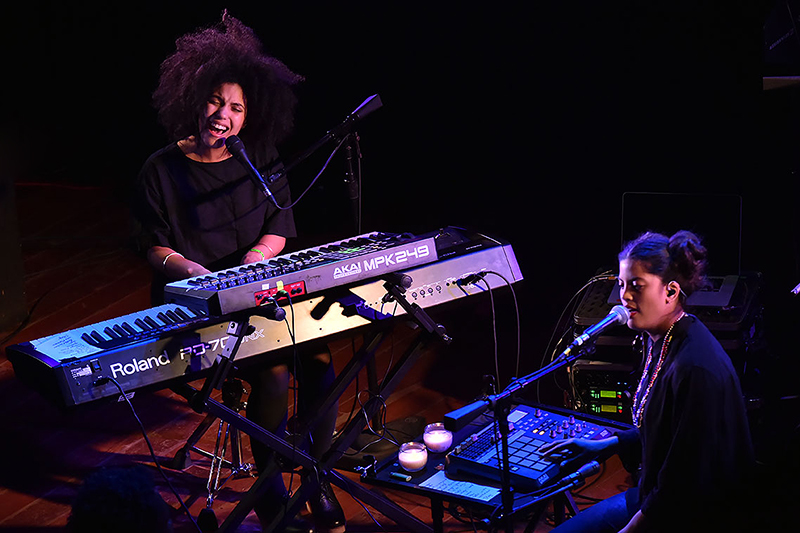 Watching the French-Cuban sister (excuse me, twin sister) duo Ibeyi perform live gives off less a sense of seeing double than it does a feeling you’re witnessing two parts of a whole. The ying and the yang. The 20-year olds Lisa-Kainde (lead vocalist and keyboardist, most often seen with her afro flying free around her face) and Naomi Diaz (percussionist on Cuban drums such as the cajon and bata drum, seen her in her usual twin buns atop her head and long stringed beads around her neck) seem to perfectly compliment each other—in music and in personality. It’s incredible to watch.

The girls’ set, like much of their first self-titled album released earlier this year, moved between songs backed with synth samples layered generously with drumming, acoustic sets in which the girls harmonize off one another and charming storytelling lead mainly by Lisa-Kainde. There was also a cover of a Jay Electronica song that had the crowd cheering like mad. Unlike most between-song banter you’ll hear at shows, Ibeyi works to further the music by explaining the traditions of the Yoruba culture embedded in their music. For instance their songs are half in English, half in this language started in Nigeria which migrated to Cuba through the slave trade of the 1700’s.

Through talks between songs, the girls explain the power of the Orishas (or manifestations of gods) to whom they’ve dedicated songs. One such god is Oya, the goddess who protects. Each sister was dedicated to an Orisha at birth. For Naomi it was the Orisha of the thunder, a fitting deity for the steady sister. The percussionist. For Lisa-Kainde it was the Orisha of the sea, perfect for the bubbly twin. This review may seem like a brief cultural lesson, but without it the music and mood of Ibeyi would make little sense or get lost in a sea of other gorgeous-voiced sister acts.