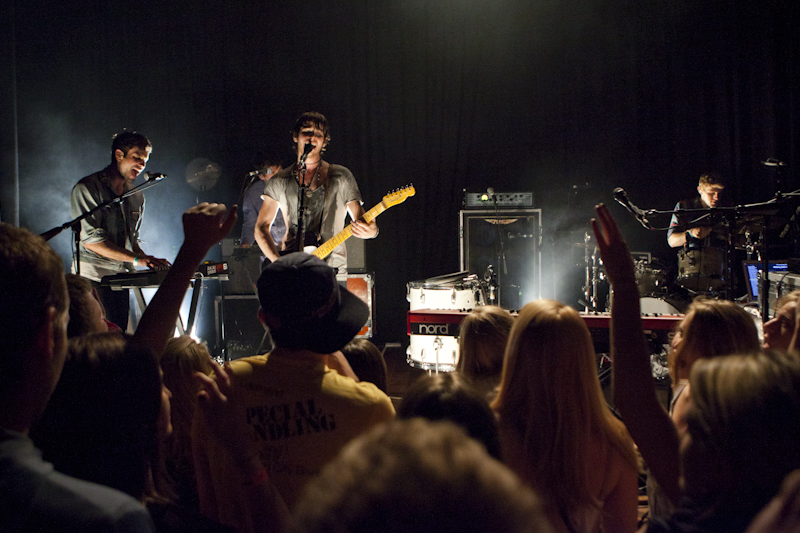 Sunday night shows that start at a late hour are not often worth the effort for those with a typical work week. It takes a noteworthy act to persuade people to trade 10 p.m. pajamas for a packed room of strangers. Foster The People’s sold out show at Lincoln Hall was rousing, exhilarating and worth every missed moment on the couch at home.

With the first of two openers not taking the stage until 8:00, the lads known as Foster The People didn’t kick off their set until nearly 10:30. The pack of fans that filled Lincoln Hall were growing restless, but any fuss for the show to start immediately transformed into enthusiastic joy when the headliners showed their faces.

After a wordless entrance of energetic drumbeats, the indie-pop-rock darlings jumped right in to fan favorites. Lead singer Mark Foster was front and center with band mates Cubbie Fink and Mark Pontius on either side. Touring musicians Sean Cimino and Isom Innis rounded out the stage. Before getting into details about the top notch quality of their live performance, it can’t go unmentioned that these guys are every girl’s answer to indie music eye candy. A band hasn’t been this collectively good looking since…well, ever. Amen!

Back to the music, among the first few songs played was “Houdini”, the infectious hand-clappable and head-bobbable track that hits the spot for a summertime jam like a cold beer under the July sun. Our Foster boy and his People played all the songs from their debut album Torches with equal commitment, energy and charm. Tracks like “Helena Beat”, “Hustling” and “Call it What You Want” brought on hair shakes and arm waving in full force. All the way through, Foster bounced his shoulders to the beat, held long eye contact with fans in the crowd and seemed entirely relaxed. The band’s romantic track “I Would Do Anything For You”  pulled heart strings and got bodies swaying with its breezy melody and sweet sentiment. There were totally some couples making out for that one. (Control yourselves, people!)

To no surprise, the stand out moment of the night was the spirited performance of the band’s biggest hit, “Pumped Up Kicks”. At one point Foster seemed visibly taken aback by the loudness of everyone in the house knowing the chorus. He stepped back with a huge smile and just let everyone run with it. There’s irony in a crowd of people joyfully celebrating a song that addresses youth violence in America – but that’s part of the beauty of Foster The People. They aren’t doling out superficial over-produced poppy tracks that will rise and fall like a passing fad that never had substance. Instead, they bring us artfully crafted songs that are intelligent enough to make dark topics palatable,without needing a soapbox to stand upon. It’s like the Mom who tricks her kids into eating broccoli by covering it with delicious Velveeta. Clever. And it’s good for you!

See one live performance from Foster The People and you can’t help but focus on their ability to prove they belong on stage. You’ll have your chance when they rock Chicago once more for Lollapalooza in August.