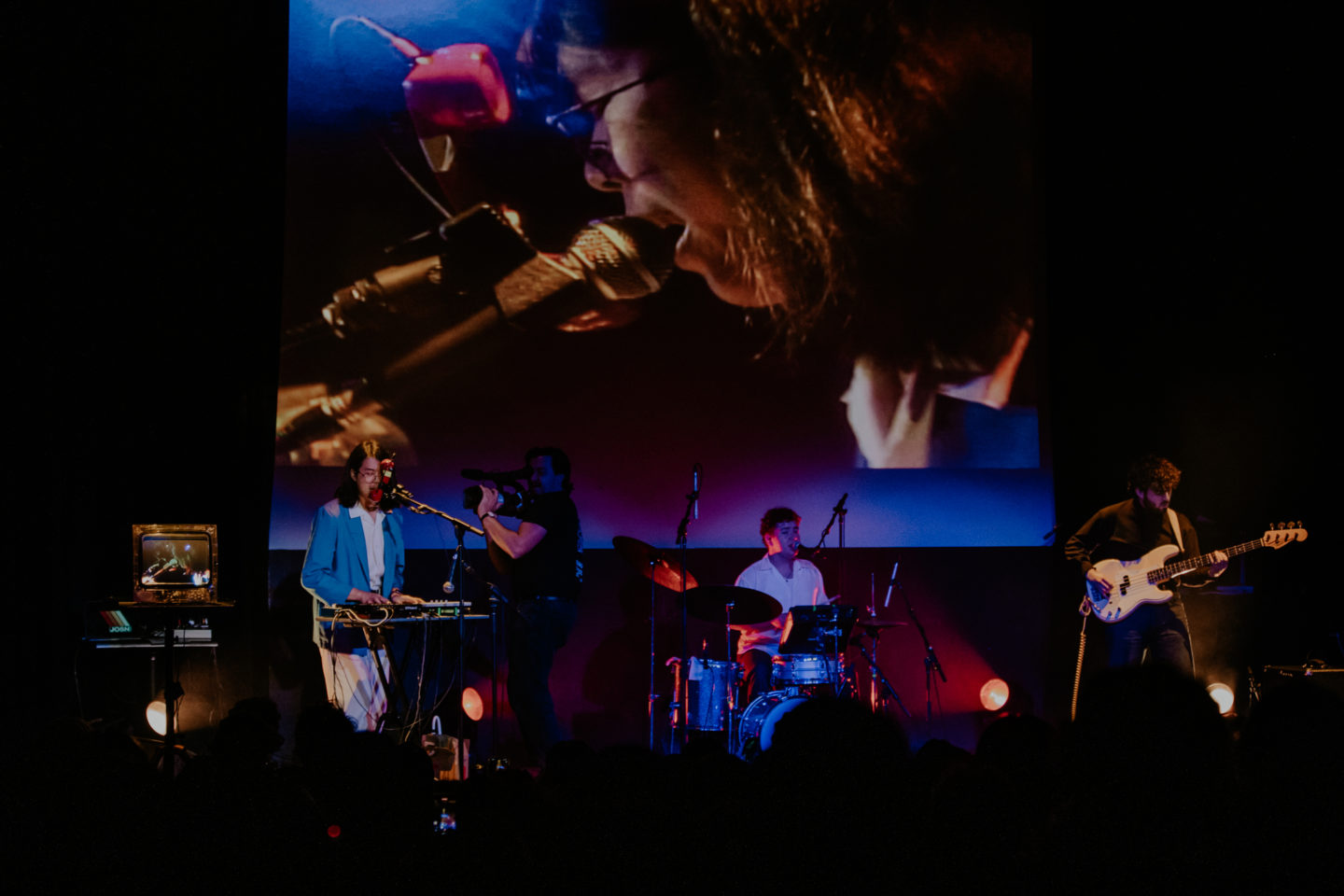 Part of the reason why I love wholesome music and musicians so much is that their fans tend to gravitate toward a similar vibe. Upon strolling into the compact yet comforting space of The Hollywood Theatre, everyone around was giddy and friendly, all bringing an excited yet warm energy. Everyone was pumped to experience the electronic beauty that is Ginger Root, a group whose music, personality, and style weave themselves through the air, gently grasping your shoulders, and pulling you back onto the streets of an 80’s Japanese city, gliding by in a taxi at 11:42 pm.

Cameron Lew, the beautiful brains and visionary behind the musical persona of Ginger Root, brings with him not only a perfect performance but also low-key undercutting comedy. You really get a grasp of his personality when on stage. In between each song, small anecdotes and run-on comments would be thrown around, accompanied by appreciative laughter throughout the whole venue. “Sponsors” were scattered throughout the night, noted every time Lew drank water. This would become an ongoing joke with the crowd, with individuals yelling “Hydrobuddy,” and chants of “water” repeating themselves over and over. Moments like these are honestly what really make the concert in my personal opinion. They stick in the back of your head, and really separate themselves as their own show separate from any other show you may see.

What added to both the comedy aspect and the musical performance, was a fourth “member” of the band filming everything that happened. David Gutel would accompany the entire concert with a camera hooked up to a large screen behind the band and two smaller old-school computer monitors so that the whole venue could see what was happening on stage. With each “hydro buddy” moment, Gutel would zoom in on many of the used water bottles on stage. When a particularly bad joke was spewed, the moment would be elevated by him zooming in on the exit sign. And towards the end of the night when they performed the song “Weather,” Gutel would zoom in on the crowds’ faces as they participated in a repeating-word moment in the song. All of these seemingly small camera shots were so unique and entertaining, and they really made the concert distinctive from any other live performance that I have ever attended.

Part of Lew’s originality in his performance is his multi-instrumental abilities, especially with singing alongside everything. There were multiple moments where a melodica would be brought out of its case, accompanied by neat little dance moves from Lew himself and the rest of the band. Intricate and groovy basslines are also a key component in Ginger Root’s music, and bassist Dylan Hovis did an excellent job at executing them while sweating in a dark turtleneck.

As with the style of Ginger Root, many fans tend to share common interests with Lew, one of those being Anime. While performing their song “Juban District,” they eloquently transitioned to a medley of openings, such as Cowboy Bebop and Neon Genisis Evangelion, which were followed by enthusiastic cheers and singing along.

If I were honestly going to recommend any band to see live at least once in your life, Ginger Root would definitely be high up there. After witnessing them open for Hippo Campus back in April, I instantly fell in love with their music and performance style. Both shows were stunning, eclectic, and unique, and will hold special moments in my memory. I would even say that if you’re not into their music, you would still enjoy being in the same room as such creative and beautiful souls who clearly possess a passion for all that they do.

Half Alive at Hollywood Theatre