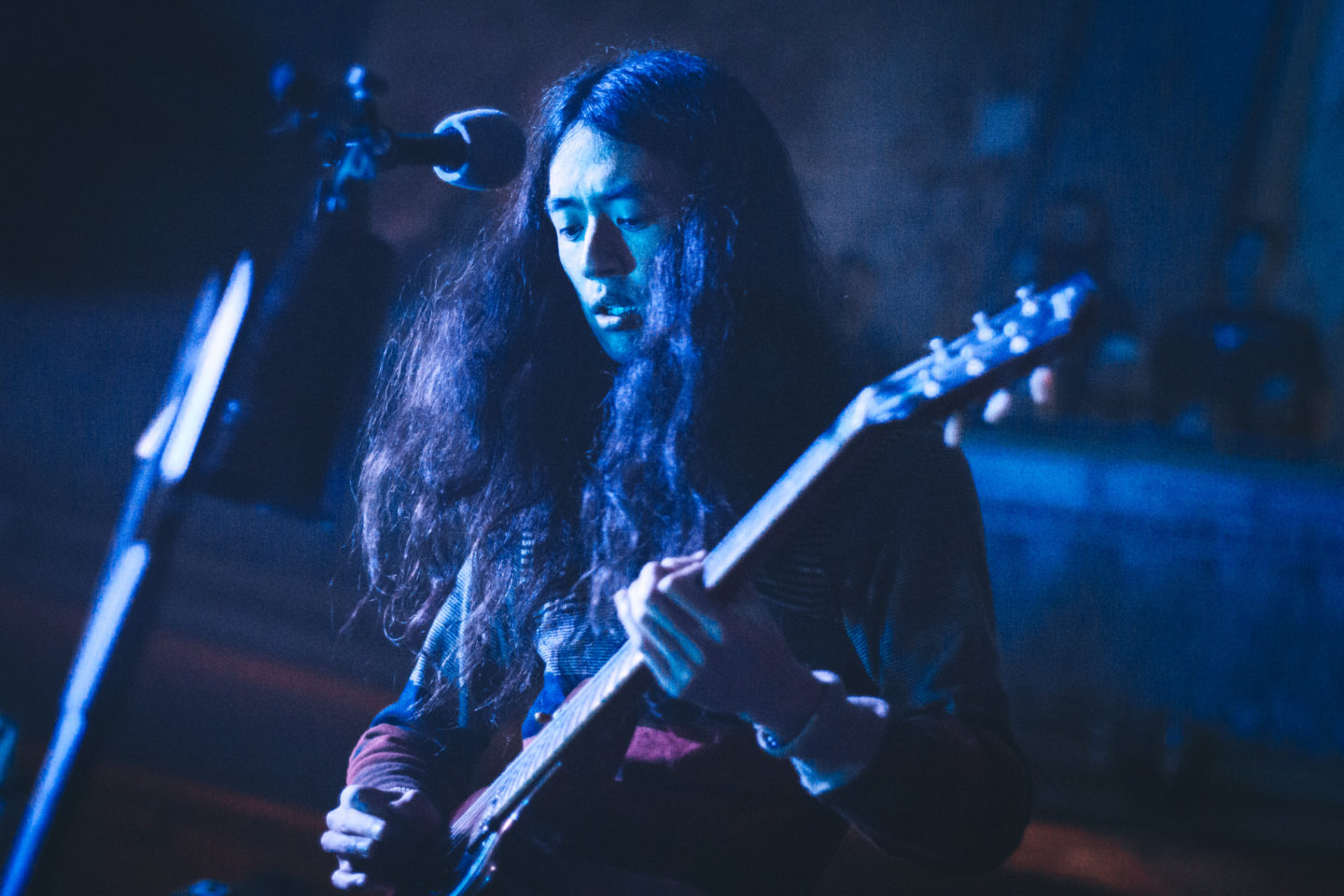 Psychedelic prog? Experimental jam band? Acid guitar hero folk? This is one of those situations where it is actually fun to throw all those genre labels around. It’s like that game where you have all the word magnets on your refrigerator and you arrange them into creative, honest or even hilarious combinations.

Such was the case when Tokyo based Kikagaku Moyo took the floor at the Pilsen neighborhood of Chicago’s Thalia Hall. And took the floor was literally what they did. In an unusual and rare sighting, their set would be played “in the round,” leaving behind any sort of artist / audience separation that exists in a stage setup. So intimate was the gathering, that on more than a few occasions, fans could be seen tilting their heads back in an effort to avoid being hit by an elbow, a headstock, a drumstick or the twirling black hair of the band members.

The crowd packed in early and tight to the stage, obviously knowing that this was a rare opportunity to not only see any group in this format, but in this case, Kikagaku Moyo, the subject of their anticipation and tangible excitement. To add to that excitement, the group took to the stage to do their own final sound and instrument check before snaking off through the crowd, to keep us waiting just a bit longer.

When they do return to the stage, the crowd really erupts. Being in the round, the sound of the fans yelling took on an unusual feel as it came equally from all directions in a surround sound sort of feedback. The set begins with the lights dropping down low, in colors of purple and blues, and Ryu Kurosawa starts the voyage with a delayed and reverbed out sitar prelude. “Dripping Sun” (check out the stream below) off their upcoming Masana Temples record puts on display right away their ability to lead the day (or night) trip through multiple groove and tempo changes. It’s a beautiful piece that sends the people off with their eyes closed, floating where they stand. The band faces internally to each other, so the audience is seeing literally the front and back of the performance. For any musicians out there, they know that this configuration is much like a band would take in their rehearsal room. And because of that, we are treated to the intimacy of being invited into their jam space. It is amazing to watch the eye contact between these men, as they connect with each other on the deepest of levels.

The set runs eight songs. After 5 songs, singer Tomo Katsurada, softly speaks into the mic…we have 2 songs left. This is met by the obvious oohs and ahhs, dismay and surprise of the audience. Well, actually 3, Tomo says. Little did we know, that those 3 tunes would be epic journeys, including set closer “Green Sugar” which was beautifully stretched out to over 10 minutes versus it’s 7:54 recorded version.

After the band exits the stage, fans linger for quite a while in the hall, as if they are hanging out in Kikagaku Moyo’s living room. Overhead all around, they are already recounting and reminiscing about their favorite moments and highlights from the just minutes old show.