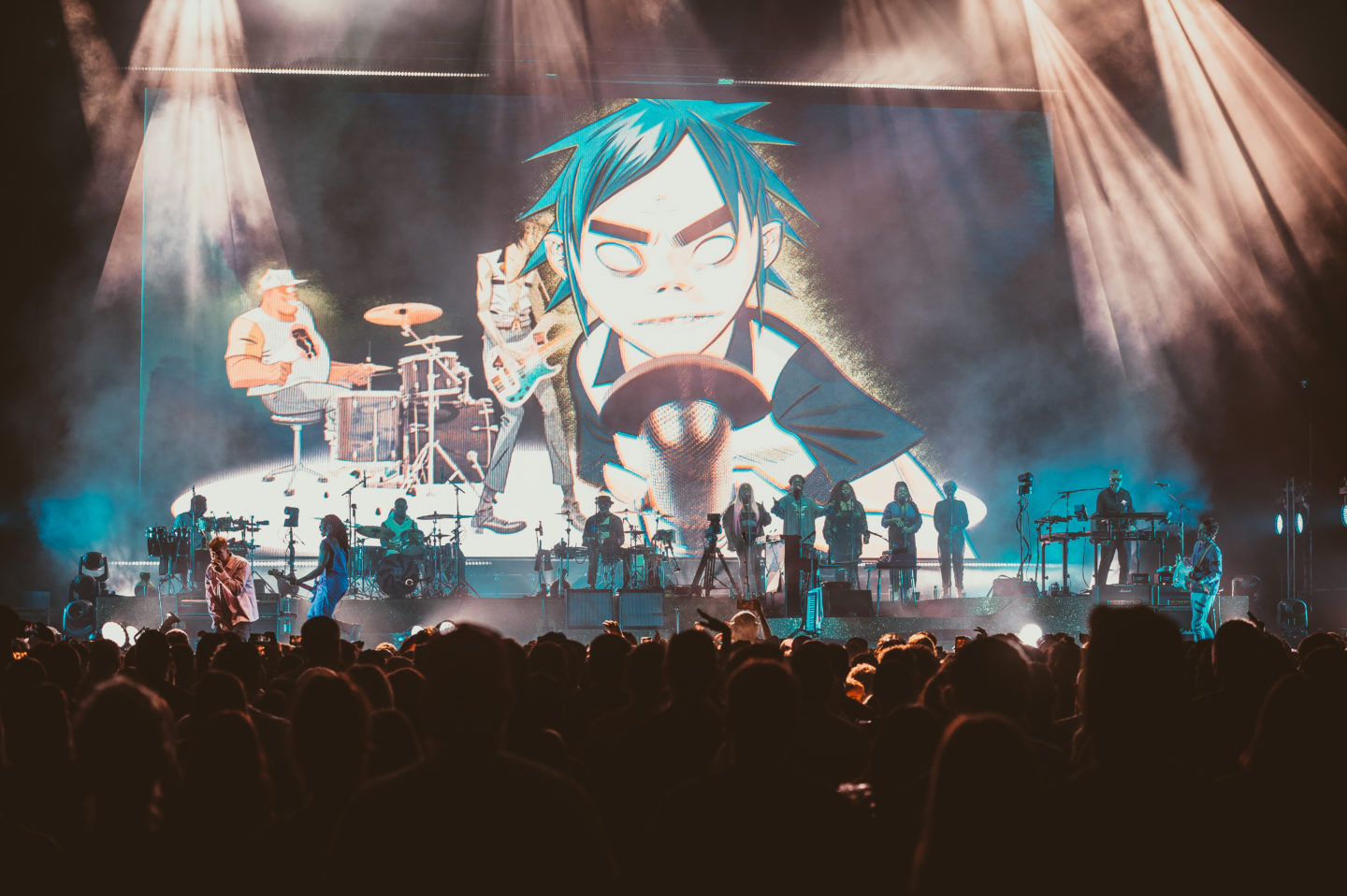 If I were to pick one obscenely random topic to devote an entire academic thesis and research degree to, it would be that Damon Albarn is a visual and musical genius. His mind is overflowing with thick, creative juices that manifest themselves in visionary masterpieces, most notably in his creation of the ageless virtual band Gorillaz. I could even go as far as delving into a bottomless pit of deep-hitting explanations and lore-retellings behind the history of the band and each member, but instead, I’m presented with a much more publicly tolerable task of reviewing their Vancouver 2022 performance.

Gorillaz is one of those bands where you can physically distinguish their fan base out in public. I took public transit on the way to the venue, and could already pick out fellow concert-goers on my ride over. Individuals show their devotion by dressing as 2-D and Murdoc, two of the virtual band members created by Albarn and his creative partner, Jamie Hewlett. Once I was sat in my seat at the Rogers Arena, the sea of fans would be speckled with blue wigs, (an iconic characteristic belonging to 2-D,) and the band’s newest hot pink T-shirts. Everyone was pumped up and eager to get the evening started.

As a part of Albarn’s genius, he has created what I believe to be one of the BEST opening songs of all time, (I may or may not be a little biased, let me be.) “M1A1,” a hit from Gorillaz’s first and self-titled album, crept its way onstage alongside the musicians, with Albarn’s voice crying out echoes of “HELLO?” “IS ANYONE THERE?” The deep guitar bellows grew louder and louder with each cry, building suspense all throughout the arena, bringing with it a gut-wrenching and scream-inducing climax. Everyone went wild, Albarn bringing everyone into an instant frenzy.

The setlist for the evening was audibly adored by everyone in the arena. At the opening note of almost every song, screams were ricocheting off the walls and through everyone’s ears. Old classics like “Tomorrow Comes Today” and “Mutant Genius” were shown love by long-time fans, while more recent singles like “New Gold” and “Cracker Island” catered to those just recently experiencing the beauty of Gorillaz.

As an inherently virtual band, it’s an interesting concept when your whole existence is 4 animated characters representing the entirety of the group. This just makes each performance so much more encapsulating and visually appealing, as they can be much more creative with performances. One of my all-time favorite aspects of Gorillaz is that their live performances are accompanied by music videos and flowing artwork, with each of the animated band members inserting themselves into the performances. It’s truly a unique experience and one that I highly recommend to anyone, even those who only consider themselves to be passive fans.

Albarn also did a fantastic job at creating a sense of community and communication, even when performing in front of such a large crowd. In between songs he would eloquently bring his own commentary, making everyone fully feel like they were on stage with him. I’ve been to shows significantly smaller that failed to make contact with the audience, making the experience feel more like an observance. Albarn wouldn’t just perform to the crowd, he would notice and insert himself with it. He would connect with people, and you could just feel the love he was spreading. One individual in the pit had brought along their toddler, and every time the child was hoisted onto shoulders, Albarn would announce “ah, here’s the wise one. Everyone wiggle to the wise one,” which followed with an entire arena full of people waving towards them. An insanely unique experience, and one that the family would surely retell for years to come.

Another difficult yet beautiful element that is an inherent piece of Gorillaz, is that the band is not just Albarn. Its core is really a collaborative group, with almost every song off of their recent albums featuring multiple artists. Because of this, every concert is truly unique in setlist and musicians. Albarn will continuously surprise audience members by bringing in artists from beloved songs. Bootie Brown, a rapper featured in both “Dirty Harry” and their newest single “New Gold,” made a fantastic entrance, performing both songs alongside Albarn.

The biggest takeaway from any Gorillaz performance is that Albarn truly has a strong passion for everything he does. From his musical ability playing the piano, guitar, percussion, and melodica, to a contagious and jovial energy maintained throughout the entire evening, you can physically feel the intense love emanating from him, no matter where you are in the venue. Albarn finished off the set with a 5 song encore, playing all-time favorites “Feel Good Inc,” “Clint Eastwood,” and “Stylo.” Even though he was visibly exhausted, collapsing to the ground and taking in everything that happened that evening from a sprawled position on the floor, you could see the love and admiration on his face. As the band closed, music and visuals alike dying off the stage, everyone in the arena was reluctant to let them leave, yet begrudgingly still made their way outside the arena. I’m already looking forward to their next show, insanely pumped to see what else Albarn has in store for his devoted fans.