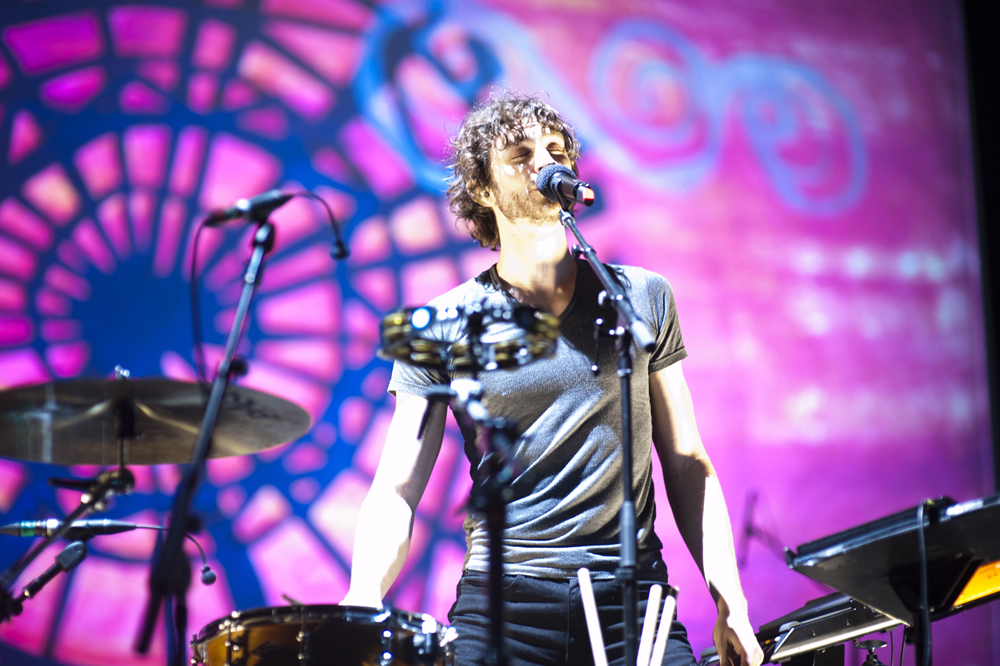 Gotye at Charter One Pavilion

When an artist stumbles upon one massively popular career-defining song, they may potentially be overshadowed by that one benchmark. Let’s look at Gotye, for example, whose name has skyrocketed into pop culture with the gargantuan popularity of “Somebody That I Used to Know”. The track reached number one single status on iTunes in 46 countries – and has gone not double, not triple, but 5X Platinum in U.S. sales alone. The song has been covered on mainstream TV platforms such as Glee, American Idol and The Voice – and the popular music video for the song boasts 313 Million views at the time of this post. With staggering stats like that, I was starting to think the 32-year-old Belgian-Australian could be at risk for being defined by that song alone – until I saw him live.

On a perfect summer night in Chicago, Gotye wowed the crowd with his range of artistic approaches to songwriting. He delivered a truly engaging set filled with songs that ranged from hypnotic (“What Do You Want”) to theatrical (“State of the Art”) and seductive and slinky (“Heart’s A Mess”). Every time he unhinged his chiseled jaw to belt out lyrics, they rang with authenticity. People who have only seen him standing naked and painted in the very famous music video, didn’t likely know he’s just as much a multi-instrumentalist as he is a singer. He jumped around to different instruments between songs, playing percussion any chance he could get. From xylophones to drums and synthesizers, the stage looked like his musical playground. Adding more whimsy to said playground was the stage backdrop; a giant screen that showcased stimulating visuals, which had been thoughtfully paired to complement each song. The cartoons, illustrations and videos on screen were bursting with color and imaginative characters that left fans mesmerized in the presence of Gotye’s artful music.

A stand-out moment of the show was related to the very intentional placement of “Somebody That I Used to Know” in the set. Instead of opting to play the mighty hit song last, (which is what most artists do) he actually placed it amidst his 15 song pre-encore set. Gotye himself even poked fun and commented he was giving people who came for just that one song the chance to leave early. It was a mark of confidence. It was a way of addressing the topic at the start of this review head-on. Want to know the real beauty of it? No one left. You may have expected a chunk of the audience to make way toward the exit to get a jump on the crowd; but everyone remained glued in place. And with reason; with his inventive music and commanding stage presence, he earned that admiration. In one succinct statement: Gotye’s got a lot more to offer beyond one break-out song.