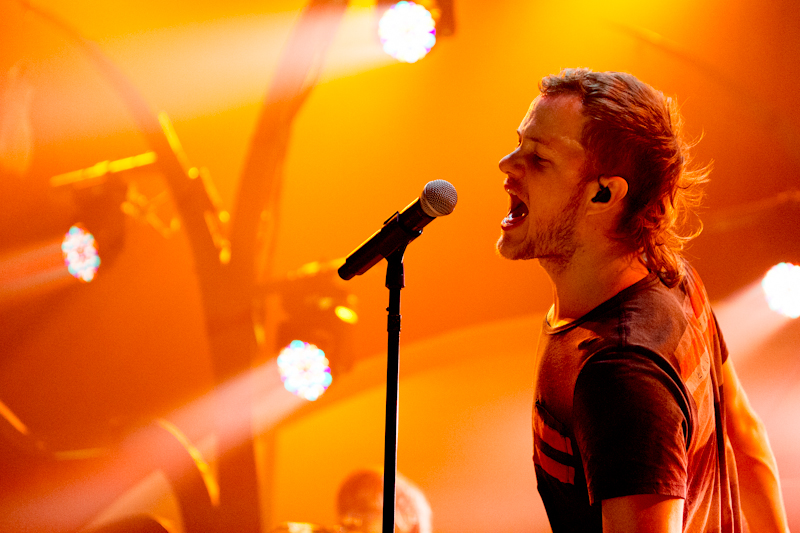 There’s a good chance you’ve heard of Imagine Dragons. They find their way onto popular and alternative radio stations nationwide and have been exploding upwards amongst post-dubstep, bluesy-electronic acts like AWOLNATION and Alex Clare. It’s a strange niche these guys have carved out, piecing together disparate genres and synthesizing… well… synthesizers and just about everything else, but it also works for them and happens to be wildly popular.

The electronic craze is here to stay. Truly, I’m fine with this. I’m not the kind of guy to pop Quaaludes and sweat it out to Skrillex for a few dozen hours, nor am I particularly enthused by most dubstep, trap, or house in general. But that’s alright – I appreciate what today’s DJs have been changing, the structural changes to songwriting that come with it, and the interplay between styles and nuances that this new scene has produced.

Imagine Dragons is kind of a different story, or at least so I’ve come to understand having perused their Spotify offerings and seen them at the House of Blues Monday evening. They’re not overly electronic, they mostly dabble in synth-land, but they haven’t quite learned the lessons Washed Out, Toro Y Moi, or James Blake have.

Based on their stage setup, you’d think they were a percussion quartet. There were drums everyone, including a gigantic one placed center stage, that lead singer Dan Reynolds would slam seemingly whenever he felt idle. And while the other official band members (Ben McKee, Wayne Sermon, and Dan Platzman) had their own jobs to do, the band would, at times, set everything aside and start banging whatever drums were nearest. Yes – everyone in the band is a drummer, a lot like Doug’s Garage Band.

So here’s where things get tricky. When these magical moments happen and everyone says, “Fuck it, I’m drummin’!” nothing especially interesting happens. The band hammers out drum beats harder and it’s louder and much more visceral to see and feel that explosive power, but that’s all you get. It doesn’t go anywhere. We’re not led into a unique bridge, we’re not guided through a tapestry of syncopation, we’re not even given any variation from a single, typically simple drum beat, just played a hell of a lot louder. And then they put the drums down and go back to finishing the song.

Without that external insight you get into music when things come together in a unique way, the drumming feels as unnecessary as the amalgamation of styles that comprises the band’s sound in general. What’s fun is when A + B = C.  What happened live was more A + B = AB.

I want to avoid sounding curmudgeonly. What Imagine Dragons does, they do extremely well and with an endless reserve of heart and soul. They lay everything out on the line during their live performance and their stage presence is virtually impossible to measure. They have the light show to back it up, the charismatic (and judging by the swooning teenage girls, handsome) lead singer, and a talented backfill to make it all come together.

But it doesn’t. Or at least it didn’t for me, not in a way that had me grinning ear-to-ear and excited for the next big pop phenomenon.  The crowd loved it, though I question their validity since more kids were trying to capture concert footage on their phones (when has that ever worked?) than actually taking it in. And while I bobbed my head and found the vocal hooks perpetually infectious, I still walked away thinking the world would forget Imagine Dragons ever existed in five years.

I hope I’m wrong. But it’s going to take a stronger follow-up to Night Visions for that wish to come true.