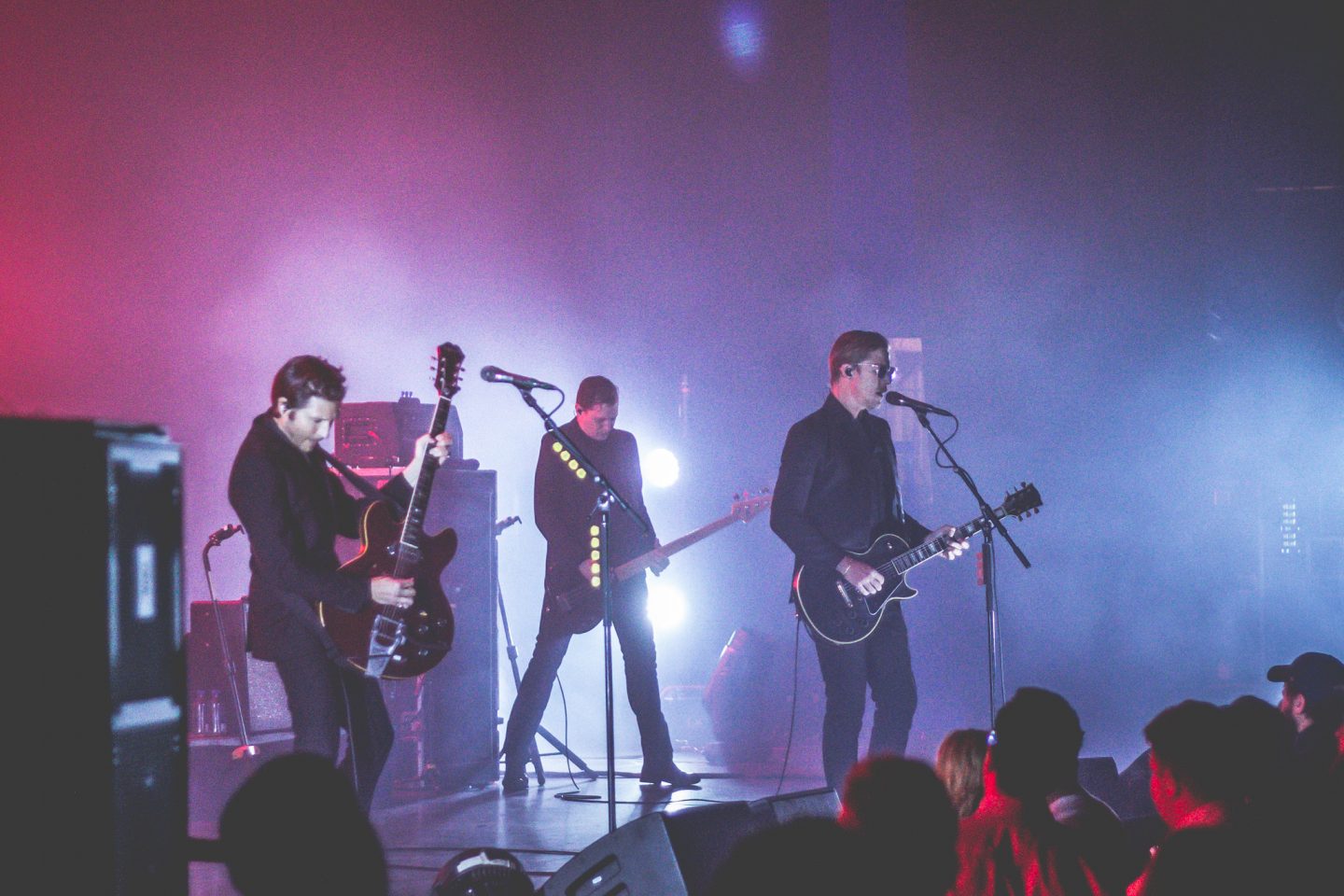 To brave the dead of winter in Chicago was a no-brainer, especially given that the Lake St Red Line stop basically dumps you right into the media entrance at The Chicago Theatre. We’re talking the mighty Interpol paired with the opulent Chicago Theatre here, an opportunity absolutely not to be missed. Bundled up and fired up, the anticipation made it feel like a mild fall evening.

Just being inside The Chicago Theatre itself is a feast for the eyes. It’s a seated venue, with rows all the way to the front of stage in the orchestra pit. There’s no photo pit for concert arrangements, so photogs are set up out in the wings. I didn’t have an eagle vision lens with me, so no close ups of Paul Banks and company. I hope you’ll forgive me. With the audience in position, as though awaiting a fine art performance, the lights go down (like Stella), followed by a bit of an audible gasp with a pause of silence, almost like the venue took a collective deep breath. The breath exhales into the standard audience eruption. The band enters, followed by Paul, and you know what happens next…yep, this thing goes to 11.

The group looks sharp as hell (as always). They look like they’re on a mission, to be executed with precision and grace (as always).

We get a bit of a serenade as the band goes deep catalog, opening with Pioneer To The Falls from 2007’s Our Love To Admire. It’s a brilliant choice as the huge disco balls high above the stage kick in at the same time as the band. It’s a total trip, full of tension and drama (as always). They double down, going deeper again, to 2004, with C’mere before finally bringing it back to the lead cut, If You Really Love Nothing, from their new record, Marauder.

The set ebbs and flows, ducks and dives in an out of shadowy corners. The old schoolers let their presence be known as any tune from Turn On The Bright Lights brings out the immediate freak outs. I’m up in the balcony at this point, taking in the big picture and enjoying my observations of the crowd. The sound is absolutely perfect. Each instrument can be heard clear as a bell. Closing my eyes, I can pick out high hats and the pick hitting the bass guitar strings as well as every chord and vocal. Angsty looking dudes with glum faces sing along during Rest My Chemistry. I’m always impressed when I see people that know all the words…that takes real effort, not just a few listens here and there. A couple has their young son along, who by the end is snuggling with momma while dad pumps his arms and sings along. A young solo female sits two seats to my right, taking notes, looking as though she might be collecting notes for a research paper. By the time the encore rolls around, and Lights comes in, which is essentially one huge build, the place is a mix of standing, singing, dancing, sitting, eyes closed, eyes open, tears, yells…this song is a dramatic tear jerker and it’s totally awesome. The Chicago Theatre is now somewhere in the lower atmosphere and Interpol is conducting the orchestra.

In the end, the show reaches it’s bittersweet finale with Obstacle 1 and frankly, it totally sucks when it ends. We’re fully satisfied with what’s transpired, but immediately longing for more and left empty with just a beautiful memory in our hearts (as always). Somehow, I feel exactly like the music. It’s a testament to its brilliance.

Encore:
Lights
Not Even Jail
Obstacle 1

It was a sound greater than the sum of their individual parts.