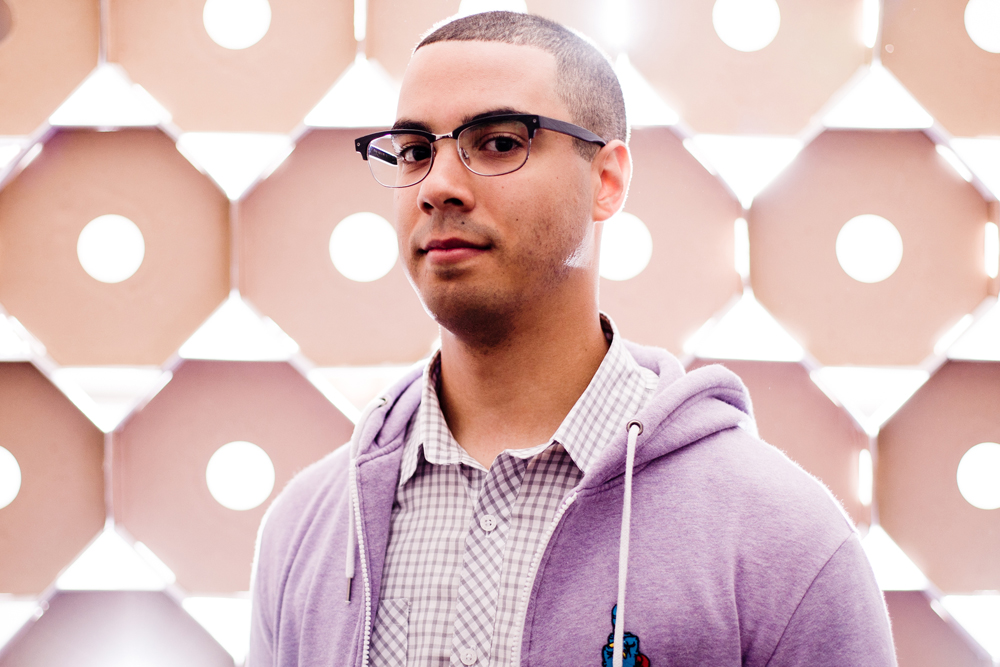 Intel manufactures electronic components. There’s a whole division responsible for the creation of semiconductors, one for microprocessors and probably even one for packaging designs.* Aside from their obvious contributions to what he does, and how you’re reading this, Intel is irrelevant. We’re here to talk about another creator of electronic goodies—DJ Intel. We’re going to stick with the name Jason because it’s the one he was born with and it suits him.

When you hear the name Intel you probably immediately associate it with the computer people. We shouldn’t fault you for that, but we’re going to anyway because Jason is much more fun to hang out with than a computer…even if you’re on a computer (more on this later). Odds are, though, if you’ve ever been to a venue in Chicago with a DJ, you’ve heard his work before. The Chicago resident is just that—a resident. As in there’s approximately a 60% chance if you ever go out it will be his fault you’re dancing. Smartbar to Reggie’s to Rodan to Empire have Intel inside (see what I did there?) at any given time. At one point in time he had EIGHT different residencies in Chicago simultaneously. There are only seven days in a week. You do the math. The man goes all night in the only way I’m comfortable saying a man goes all night. With as much local and national acclaim as he’s gotten, it’s clear the hard work has paid off.

You’d expect the man with a list of credits longer than some famous actors on IMDB to at least be opinionated. You’d be right. For instance, he has an opinion about zombies. He loves them, but he’s a traditional Romero fan because running zombies (a la the “28 Days” series) are just infected; they’re not dead people. He also has an opinion about ranch dressing. Don’t do it unless it’s on a salad or a baked potato. Don’t get Ranch anywhere near his deep dish Pequod’s Pizza you savage. The opinions go on and on. The Mid and Empire and Sub T are all awesome, but it’s more about the staff for him than anything else. Oh yeah, and no one should have body doubles, even if it’s part of your lore, because you aren’t a comic book villain. He has no problem sharing all these opinions (and general hilarity) on all of his social networks. For the record, his list of favorites goes like this: Blogspot > Tumblr > Twitter > the MySpace Hell that is Facebook. That’s best to worst just in case you didn’t figure that out based on the use of the Hell—or MySpace. What’s the point of all his opinions? They’re humanizing. Everyone has opinions. Jason is just like everyone else. He likes beer, whiskey and Malört (with or without grapefruit). Ok, so maybe he’s not exactly like everyone else, but that’s what makes him interesting.

Much like us, he grew up in the Western Suburbs (hint: high school was a four-letter acronym close to a place that may or may not be called Molly Malone’s). While he might have opinions about everything (we’ll let that whole Malört thing slide), his mama raised him right. Always be polite. Say please and thank you. Make eye contact. Egg cars when the drunk people are in the bar, and then watch them figure out honey and thumbtacks. You know, the same basic sort of suburban hijinks that most of us grew up on. He’s like you or I, except for the fact that he’s had his name on fliers since the time most of us were in high school. Seriously. There was a box of old rave fliers at the shoot and his name was actually on a few of them. Somehow, playing at events with everyone from Wu-Tang to Mos Def and headlining big name shit like Lolla and SXSW never got to his head.

He’s a straight-up, down-to-Earth guy that likes bikes, booze, all kinds of music and Condescending Wonka. He’s the type of guy you’d want your daughter (gasp!) bringing home for The Bears opener. Or Thanksgiving depending on what holidays you celebrate. He doesn’t care that he’s been doing his thing for twice as long as the other DJ Intel (that sniped his original domain when it expired). He remembers the number for the Pizza Hut growing up and wants an open petition to have a Helltrack in Chicago like they had in the 80s BMX Classic “Rad” (watch this if you have no idea what that means). The self-proclaimed honor roll kid (lets you get away with more shit because no one expects the Spanish Inquisition) is a wealth of knowledge about everything from current Internets, to rave fliers, to horror films starring Rowdy Roddy Piper, to everything about Chicago music. Oh yeah, and he’s pretty fucking good at making music too. In parting, he’d like you to remember to “keep in touch and have a great summer.”

Until Spring Awakening happens (be there!), check out his I Haz Podcast for Maypril (RIP: Berwyn Spire) below:

*Please note, I cannot actually confirm or deny the existence of these divisions.