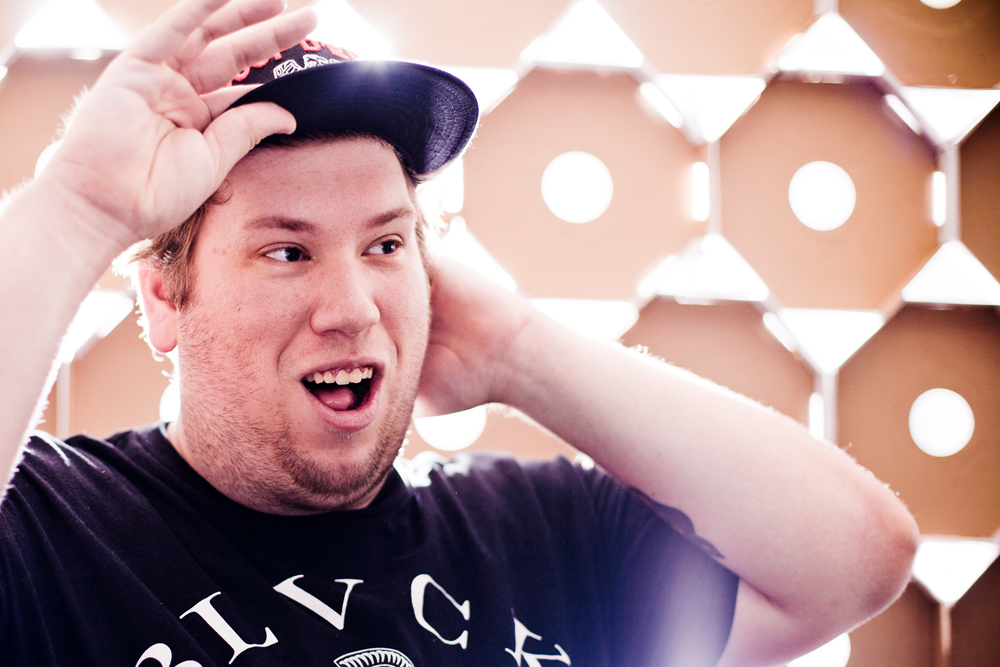 PHNM, aka DJ PHENOM, aka PHENOM, aka Colin Rebey is not from Chicago. He grew up in Indiana and came up through the Catholic school system. His birth certificate might not have a zip that starts six-oh-six, but PHNM is Chicago in every way but birth—especially when it comes to the DJ scene. PHNM knows Paul Johnson. He knows Green Velvet/Curtis Jones/Cajmere. He knows Intel and Zebo and Willy Joy and Big Once. After a relatively short amount of time in the city he now calls home, Rebey has risen to total firestarter—which is fitting because The Prodigy’s Fat of the Land is one of the first electronic albums he got into.

All the house and booty and juke and electro in his arsenal end up being mere pieces of the larger whole he presents to the audience when he finger bangs the tables with the perfect mix of skill, speed and ferocity.

That probably explains why his week looks something like this: Monday – Rehab at Debonair. Tuesday – Recovery. Wednesday – Zombies vs. Skeletons at Cobra Lounge. Thursday – Play out somewhere like Berlin or Spybar. Friday – Get paid to play four hours of rap music (no requests, it’s awesome) at Hub 51. Saturday – Evil Olive from 10pm to 5am with Johnny Walker. Sunday – Die, resurrect and then do it again. Obviously, people have taken notice of his talent.

And all of this happened in 24 years of existence. His meteoric rise started with vinyls from the likes of Dem Franchize Boyz and Lil Jon, but the first one he straight up killed was Hendrix’s Are You Experienced which, for the record, he paid a bunch for in NY. He’s a blending of the old and the new. An affable young man that likes to get down, combined with a sonic chef who is wise beyond his years in proportion, volume and composition. PHNM is a new, bottle-aged whiskey. It’s tasty, smile-inducing and will probably get you fucked up if you consume it right now. Will it get better with age? Definitely. But when it’s this good right now, who wants to wait?

Definitely not zombies or people on bath salts. What you see above is probably as close to Rebey’s “holy shit, someone’s getting bath salt attacked” face as will ever be documented until the actual incident. He now constantly lives in fear of homeless people because he’s afraid he’s going to get bath salt attacked and have his face eaten off. When the first Chicago Bath Salt attack happens (in Wrigley) they’re inevitably going to steal all the PBR and Old Style in Chicago and, wait, it could actually be worse.

In case you missed it right there, he’s hilarious. He thinks outside the box enough to make everyone pay attention to what he’s doing, but not so far off the reservation that it requires an advanced degree to understand—all while keeping it playful and fun. That’s why React wakes him up from naps with phone calls and text messages to play out at places like Spring Awakening (Saturday on Da Colonnades at 7pm) and his favorite venue, The Mid (sound system is too good and people come up asking for pictures and offering bottle service at their tables). It’s also why he has a who’s who collection of Chicago friends and residencies. Ultimately, it’s what’s going to make you dance your ass off, have an ear orgasm and kill the battery in your phone as you try to Shazam all the awesome songs he’s mixing that you forgot about over the years.