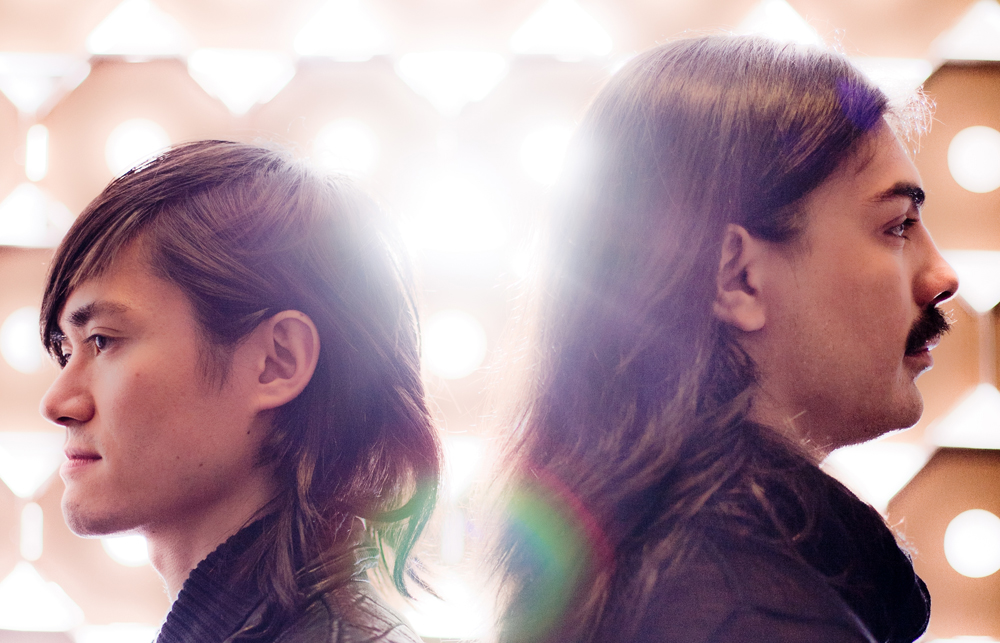 Midnight Conspiracy is a riddle, wrapped in a mystery, inside an enigma. The mythology that surrounds them is based on a few key things. Black. Dark. Moody. Mystery. Blood. Conspiracy (does the elusive third member actually exist?!). Couple all of that with the fact they bear the Eye of Providence as a logo, and a set piece, and it would be easy to classify them as pro-Illuminati (let’s call it prolluminati). You could do that, and plenty of people have, but you’d be totally fucking off base.

For starters, Midnight Conspiracy isn’t a secret society. All the nouns used to describe them earlier are true. Yes, they really like the color black. Yes, a lot of their parties involved covering everything in blood. Yes, the music can be dark and moody. And yes, there is some conspiracy about whether or not there are actually three members in the band (spoiler: Graham does, in fact, exist… even if he’s not in these pictures). But having a cool mythos and a backstory does not a sacrificial circle make.

Apparently pictures are worth thousands of words, and there’s a lot you need to know, so let these serve as photographic evidence that Louis (devilish good looks), Mikul (mustachioed devilish good looks) and Graham (unpictured), aren’t actually robed figures standing around a fiery pit chanting.

Do those throngs of rabid fans look like they’d join a secret society? Of course not. Do they look like they’re having a great time? Most definitely. So please, no more “killuminati” comments on YouTube and stop asking them about whether or not they’re part of the Illuminati when you interview them because it’s their least favorite interview question.

If anything, they’re anti-Illuminati. And seriously, do these look like the type of fun loving guys that meet in secret to subvert governments and lay the groundwork for a movie starring Nicolas Cage that’s going to be released in twenty years? Absolutely not. All they really wanna do is make music and talk about food.

No, seriously. “How come no one asks about food?” They like In-N-Out and pho and Waffle House and, wait. We need some music to go along with all this food.

And Japanese ramen and sushi. And cheesesteaks. And Katakana. They know it’s supposed to be all about the music, but the road is all about the food. You generally only get one meal in each destination, so it has to be a good one. Faced with the decision to only eat one thing the rest of their lives, they’d go with the bento box because “diversity is key.” They would love to wax nostalgic about food all day, but that wouldn’t really get anything out there. At the end of the day, they’re still about the music.

Midnight Conspiracy is a constantly evolving beast that shows no signs of stopping. What started completely as a narrative storyline evolved into live instrumentation and ultimately into that 16ft bastion of laser lights and eyegasms that you saw in the earlier video. What’s in store for Da Main Stage of Spring Awakening on Saturday at 6pm? Your guess is as good as mine. One things for sure though, people are going to fucking rage. The Eye commands it.