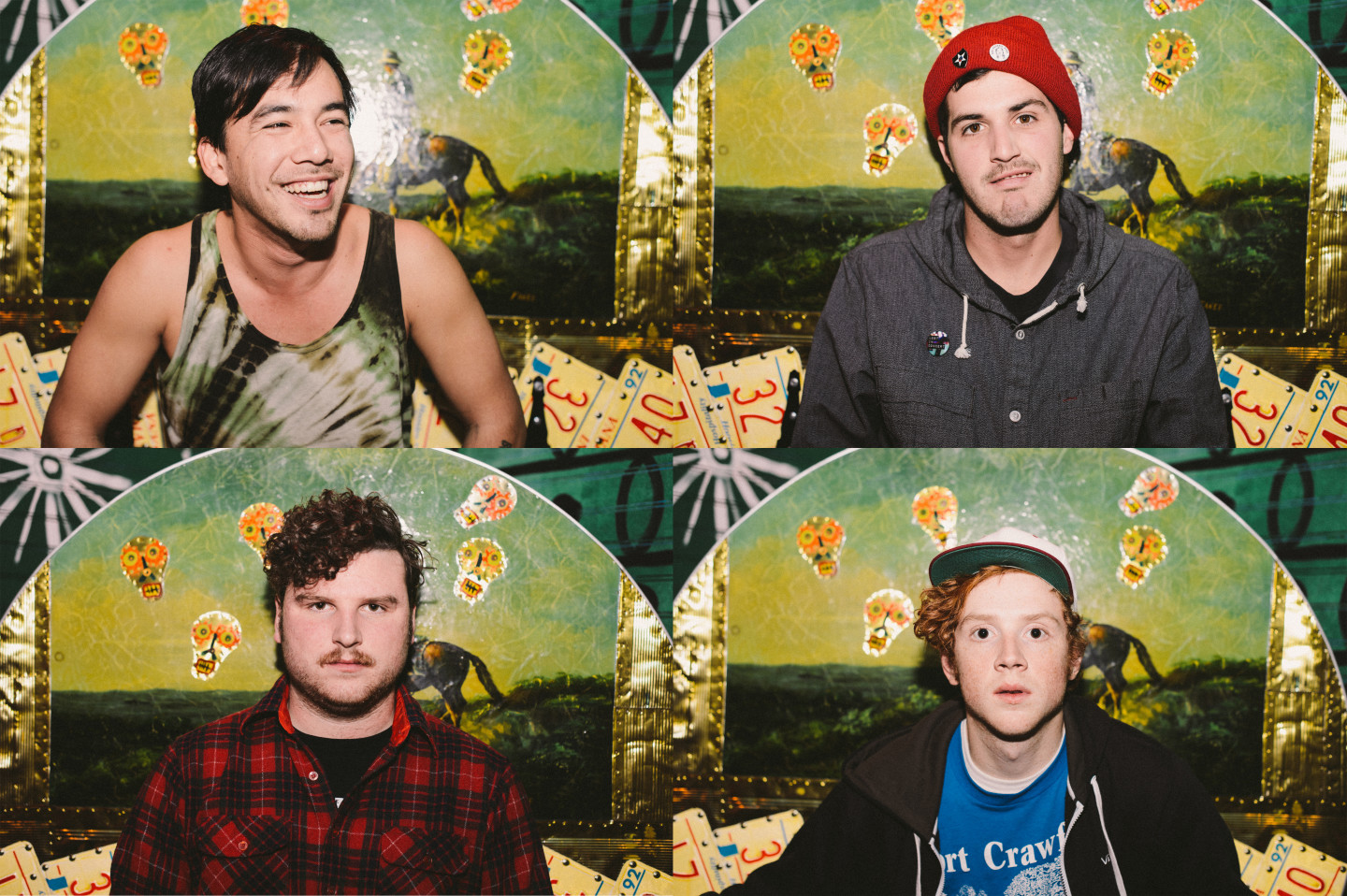 “Dicks suck. Nobody likes to hang out with an asshole.”

While this reads more like a line from Team America: World Police, its significance is strangely poignant for the Los Angeles-based band FIDLAR. They dropped this nugget of wisdom at the House of Blues Chicago on a cold Monday night and sounded as if it were some kind of joke, but this couldn’t be further from the truth of their everyday touring lives. The four members of the band, Brandon (Bass), Max (Drums), Elvis (guitar/vox) and Zac (guitar/vox), are impossibly nice dudes. They greeted us with beer and smiles and were more than eager to dig into their music, the road, the explosion of punk, and the most important things they hold on to while rapidly cycling between all of the above.

The word itself – FIDLAR – comes from a buddy of the band’s in Hawaii. It’s an acronym for “Fuck It Dog, Life’s A Risk.” Like most things that stick, it started as a joke, but as the band began to form (and party), it became a personal mantra and a point of persuasion. Imagine the following scenario: It’s 3 AM. You have work in the morning. You’re already hammered. Your buddy approaches you with a spare beer in hand and offers it to you. “No way, man, I gotta go home or I’m going to puke and be miserable,” you say. “Dude,” your buddy replies. “FIDLAR.” You consider his point. What other choice is there? “You’re right,” you say, and you down the beer immediately.

In no time, “FIDLAR” came to encapsulate all that the guys stand for and soon supplanted the band’s original name, “Fuck The Clock.” From the aimlessness of our conversation together, I imagine it to be something the band would meditate upon every single morning (if meditation wasn’t so damn lame, anyway).

The band approaches their music-writing as a DIY endeavor in almost every sense, partially out of necessity. Surprising no one, they proudly proclaim, “We’re totally broke.” So they record at home and a few odd locations. They manage themselves from the road (they had a bad experience with a tour manager, so, you know, FIDLAR – “we’ll do it ourselves”). And despite the fact that they have a few labels to satisfy, they feel no hesitation in writing exactly the kind of music they want to create. “If we wanted to write a synth-pop album instead, we’d just fucking write it,” Max says. Obviously they don’t want to write a synth-pop album. Their freedom of expression no doubt extends from their natural state of whimsy, but it also keeps their music honest. Their sound is, by definition, loud, brash and declarative. So if there isn’t any legitimacy to it or if it sounds insincere, they’ve already failed.

That unwavering honesty extends to their lifestyle. “Every time we come to Chicago, things get crazy,” says Zac. They had a long night of revelry on Sunday (the night before this interview) and seemed to still be partially in recovery mode. It was probably a crucial release – they’ve been touring non-stop all year and struggle, like a lot of bands, with highway disenchantment. Brandon and the guys try to exercise every morning to combat the monotony. “Besides,” he says, “it’s a good way to cure a hangover.”

On this tour, they’ve now swung through Chicago three times in 2012, previously appearing with Delta Spirit for Lollapalooza and The Hives before that. They’ve hit a litany of venues, but Subterranean remains their favorite. Given its dirty charm and punky atmosphere, they no doubt feel much more at home on a grungy stage. It doesn’t hurt that one of them fell down the backstage stairs the last time through – physical humor goes a long way with this skater crew. As introspective as they can get about their own music, they’re just as comfortable following-up with a couple “your mama” jokes.

Humor, honesty and fun, to be precise, define the FIDLAR aesthetic. “I think the difference between punk bands and us is that punk bands stand for something, but this is much more fun-driven,” says Zac. Whereas many punk bands come across as pissed or angry about something (or nothing in particular), Zac hopes FIDLAR appears more “stoked” than anything else. Despite their crunchy and heavy riffs that reference some of the punkiest bands emerging from the west coast scene, their good vibes override all presumption. “We like jumping up and down [at our shows] a lot more than circle pits,” says Max. This all seems to originate from their lackadaisical and benevolent demeanor both on and off the stage.

So what’s next? Apparently a lot. A European and American tour are both booked for 2013 as well as studio time in the US, Canada, Europe, and Australia. Their debut LP drops in January, but they were so eager to get it in the hands of their fans that you can buy it now at any of their live shows. It’s vital to them to be as loyal to the fans as the fans are to the band. They only exist as a musical unit today because people kept showing up at their house shows on the west, so they repeatedly emphasized the importance of this dynamic. More than anything, “We want people to be a part of it,” says Zac.

Will they return to Chicago soon? “FIDLAR, dude.” (So, probably)