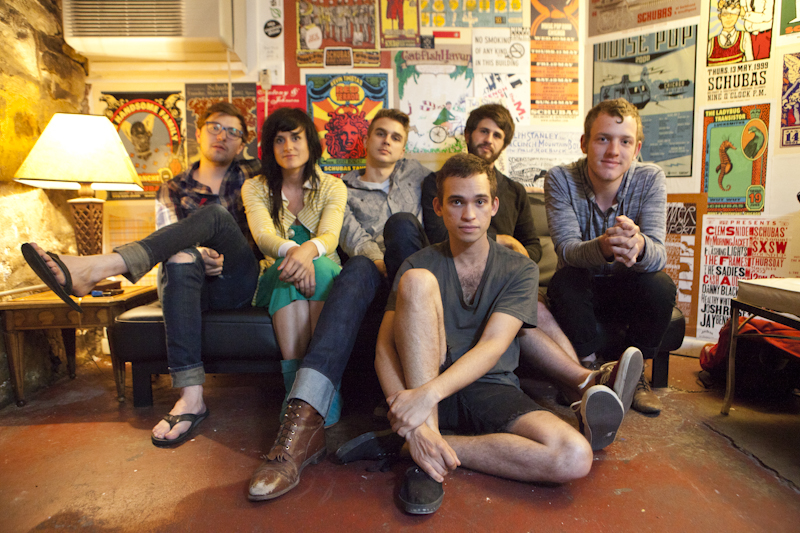 Great things are on the horizon for the Kopecky Family Band. After a staggering seven shows in Austin for SXSW, they opened for DeVotchka on tour, were featured in the NPR Tiny Desk Concert Series and are playing a handful of shows at Bonnaroo.

Lost In Concert had the chance to sit down with these six on-the-go musicians to talk about all things from internet memes to Disney soundtracks and the importance of buckling up. Really.

The Kopecky Family Band is comprised of Kelsey Kopecky, Gabe Simon, Corey Oxendine, Markus Midkiff, Steven Holmes and David Krohn. First off, we had to address the pink elephant in the room regarding how they may feel about confusion over if they’re actually related or not. “I would definitely say we all have our own individual stance, ” says Steven. “We all kind of handle it differently, which could probably be problematic for our audience. You ask Corey and he’ll say, ‘None of us are related.’ Then you ask Markus and he’ll say ‘Yeah, we two are brothers and we’re half siblings, and they’re related.’ ” Everyone chuckles at the humor of this and seem to generally agree they may disagree on the subject.

Genetic connections aside, every “family” has individuals who fall into certain roles; the parent of the group, the middle child, the wild cousin. In the case of this band, there’s a general consensus Kelsey plays the maternal role. One of the guys speaks up to say, “We had a huge 20 minute discussion about whether we should buckle up – and she’s posted all these YouTube videos on our walls about driving safety.” Kelsey jumps to defense and in the most heartfelt and charming way exclaims, “I’m very passionate about it. It’s serious though!” Gabe chimes in to expand on her motherly love. “We had this one show in Nashville – and we all had kind of a rough day – and she wrote all these encouraging messages on the stage floor on the way to our positions. Things like, ‘Just know that you are loved’.” With that sweet anecdote shared, Kelsey’s role as the maternal one had just pretty much been sealed in cement and dipped in gold.

What of the other family members? We learned that despite Corey’s energetic bass shredding on stage, he is pretty much always grumpy and quiet. Steven is usually kind and peaceful, though known to cause innocent mischief with Markus fairly often. Gabe, self described as “intense”, takes turns from being fatherly on one end of the spectrum – or spoiled on the other end (depending on the day and who you ask.) Best guess for David is that he’s the drummer who doesn’t seek the spotlight but listens intently to everything going on around him.

To no surprise, with six varied personalities forming one entity, the origin of each person’s musical inspiration comes from a different source. Markus likes to blare Disney soundtracks on the road because of the rich string harmonies that inspire his cello playing. Gabe gets most of his music writing inspiration from conversation and building relationships. For Corey, it’s about staying curious. “If there is any moment where I feel like I have music completely figured out, I don’t feel like I’m in love,” he says. “There has to be an element that’s mysterious to me. I try to make sure I’m listening to things that are musically challenging, and I think that’s the same for a lot of us.”

Kelsey, Gabe and Steven are the three who collaborate on lyrics – and to no surprise, the free-spirited Kelsey has a very natural and spontaneous way of writing. “The way I write a song is usually out of the way I want my body to feel,” she says. “Mostly things start from either an emotional state or a physical goal of how I want my body to move. It’s always about what’s honest and what you’re feeling,” she adds.

Wether we’re addressing the Kopecky Family Band’s music or their general vibe as people, their essence is the same; passionate and joyous with a dash of humor. A great example of this is when they played the “Next Big Nashville” show down in Austin for SXSW and smoothly transitioned their song “Animal” into the famed internet meme “Bed Intruder“. One minute you’re hearing a charming harmony of “ba ba ba ba” and the next it’s Gabe’s distinct voice singing, “hide ya’ kids, hida ya’ wives.” Awesome.

We now know all the following about when the band is on stage: Kelsey shimmies and shakes in her own Kelsey way with her pretty dark hair all in her face. Gabe is always fully present in the moment, glasses sliding down his nose every time – and will keep on playing guitar even if his finger is busted and bleeding. Corey bounces around the stage with his bass like an animal let out of a cage. Markus and Steven exchange secret “tongue-in-cheek” inside jokes while performing. And David always remains anchored at the drums, despite the occasional madness surrounding him.

We also learned that although they bring an unfettered zeal to the stage, they also offer an undeniable warmth off the stage and behind the scenes. Post interview, Kelsey walked us back up to the main level and brightly greeted the Schuba’s door man because she remembered him from their last show there. During our time together, they actually turned the table on me to talk about things I’ve accomplished in my own life, which is not typical for an interview. That’s just it, though – it wasn’t really an interview with the Kopecky Family Band, so much as it was a conversation. They remember the staff and asked questions about me because they genuinely care. This comes across within minutes of knowing them and most importantly, it comes across in the music they craft.

At one point, Kelsey said, “I feel like the way we perform is very telling of the way we interact.” Collaborative. Animated. Loving. Definitely.