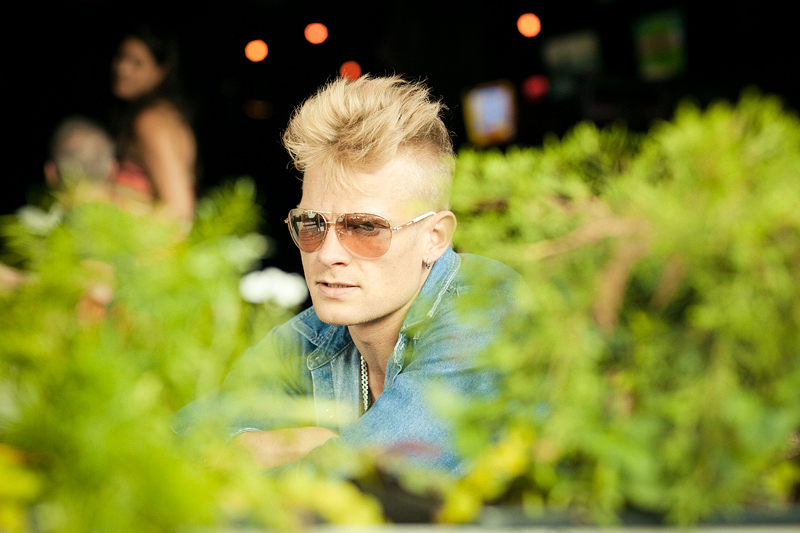 Mother Mother are kind of a paradox. They have a darkness tempered by bright colors, a masculinity softened by female influence, and a calmness underneath their sometimes feverish, driving hooks. Their most recent release, entitled The Sticks, is full of seemingly conflicting elements. “Dread in my Heart” pairs a bouncy nursery rhyme melody with an acerbic despairing humor, and a poetic string of love metaphors ends with “Believe me when I say / Love, it dissipates” on the aptly-named “Love It Dissipates.”

Away from the stage, it makes sense. I chatted with singer Ryan Guldemond and drummer Ali Siadat before their recent show at Reggie’s Rock Club in Chicago, and they were a paradoxical pairing themselves. Siadat has an air of peace and benevolence surrounding him, while Guldemond’s wit drove the conversation, bouncing from shanties to American spittle.

It is a good day. Actually one of the last days of your tour, right?

Ryan Guldemond: Yeah, nothing for a couple weeks. Summers tend to be fairly intermittent, with festivals and things. Nothing really makes sense, you sort of patch it together.

It’s been 2 years since you’ve been in Chicago. What do you miss most?

Ali: We always rush in, set up and play and leave. That’s unfortunate, ’cause it’s the best city. When we do get five minutes to drive through and look at things, our eyes are peeled wide open to the spectacular colors and buildings and everything. That drive by the water is quite incredible.

Ryan: The rooftop patio on top here at Reggie’s is very cunning. I think we’ll miss it.

I read that your latest album was written mostly on the road. What makes the road such a good place to write music?

Ryan: You actually just get a lot of time to wait for stuff to happen, a lot of idle time to get stuff done. You log a lot of hours in the green room waiting for the action. It’s a great time to sit with an acoustic guitar and write and share it with the band, get intimate with the stuff. At home, everyone’s a bit more fragmented. Life seems to be a bit more scattered and all-consuming.

And everyone has their own houses…

Ali: One of the unsung categories is that when we’re all on the road, we’re all in each others face so much that we do get to experience a lot of music together. You hear stuff playing in the bus, you’ll see other bands playing. I think that just experiencing a lot of that together and talking about it and processing that internally, it all influences the creative process. We often find a lot of stuff that we really like on tour, and it funnels its way into our sound.

How do you go about fleshing out songs on the road? Or does that happen later?

Ryan: There’s only so much you can do on the road. You can’t all get into a studio and flesh it out, as it were. But at home, we undergo a demoing process using our home studios, recording ideas individually and collectively. Then we hash that out at a jam space.

There are a few stages. We gotta work out harmonies; that’s kind of its own process. Working out the rhythm section and guitar is its own thing, and putting it all together is the final act. There’s a few different categories of bringing a song to life.

You guys have been away from Canada for a while on this US tour. What’s the difference between playing and touring in the US and Canada?

Ali: More driving in Canada. Fewer centers of population, I think. The US tends to be a bit easier on a logistical front because the cities are closer together. You got NY, Boston, Chicago, Detroit, Philadelphia, all of these major cities that are closer together, so you can have a bit of an easier time.

Hah, I do know what you mean. I spit on plenty of folks.

There’s also less attendees. We’re more of a bigger deal in Canada. Down here, we feel like were on a secret hidden mission, whereas up there, it all feels a bit more exposed.

Secret hidden mission! Excellent. So I love the new album, The Sticks, especially the lyrics. Is the disparity between lyrics and music, with dark lyrics over lighthearted music, on purpose or does it just happen that way?

Ryan: I think it must come from the brand of humor which the lyrics are borne out of. It’s a cynicism that wears a smile. I think for the dark subject matter to be presented well, it needs to come from a fairly neutral, almost comical standpoint. I think when the narrator and the message are all wallowing, it’s just too much.

It’s fairly subconscious, whatever it is. It’s not very purposeful. It kind of comes out how it comes out. But in having to think about these things and break them down, because we do interviews and stuff like that, people ask me about it.

It makes you analyze yourself.

Ryan: Yeah, which is a good process, because otherwise we’d never think about it. I think that has a lot to do with it.

How do you reconcile the message/theme of The Sticks, the whole getting away from civilization and into the wild, with being in a band and having to be in cities.

Ryan: Well, it’s very easy to simplify yourself anywhere you are, whether it’s in the midst of a chaotic city or in a remote place. It’s less to do about your surroundings and more about your perceptions. The Sticks isn’t so much about moving into a cabin, it’s about breaking your perception down into some of the more raw, simpler, human roots.

That’s really the part that I identified most with, that simplification. People are living very complex lives.

Ryan: They’re living very complex lives, but it’s also very surface. It’s not complex in a good way, it’s complex in a simple and surface way. I think the more you strip and shed yourself of all these external things that distract us, the more complex you can be. Complex with your emotions and your soul and how you can use those tools to interact with the world at large in your craft, in your job and in your relationships. [To Ali] That’s a question you’d be in tune with. That manner of existing…

Ali: Anything I would say would be a paraphrasing of what you said. I guess I would add that it is very easy to fall in line. Even if you have those intentions to simplify your life and move to some purer realm of existence, it’s so easy to fall in line with everybody around you when they are confused or scattered or angry or actively over-emotional. It’s very easy to fall in line with them, and it takes a special effort to step away. It takes a really strong intention to divorce yourself from that energy and to live differently when everybody else around you is doing that. I think The Sticks addresses that in a very direct fashion.

Ryan: Yeah, I’m not big for cryptic art. I like the message to be clear.

But it’s clear in a poetic way. Especially on “Love it Dissipates,” that last line surprised the hell out of me. But then you look back at some of the earlier lines, like “If you’re the wounded, I’ll be your pain…” There’s a little foreshadowing.

Ryan: There are some people who think that think that song is a long-winded and trite metaphor. I think it’s great to hear those kinds of things ’cause it reminds you that people don’t listen too deeply to the lyrics… Which may be unfortunate on one hand, but on they other, it’s really exciting to put a lot of energy into your lyrics. Those that actually do take the time and dig in and get it are gonna have a much bigger reward ’cause they’re privy to a secret handshake of sorts.