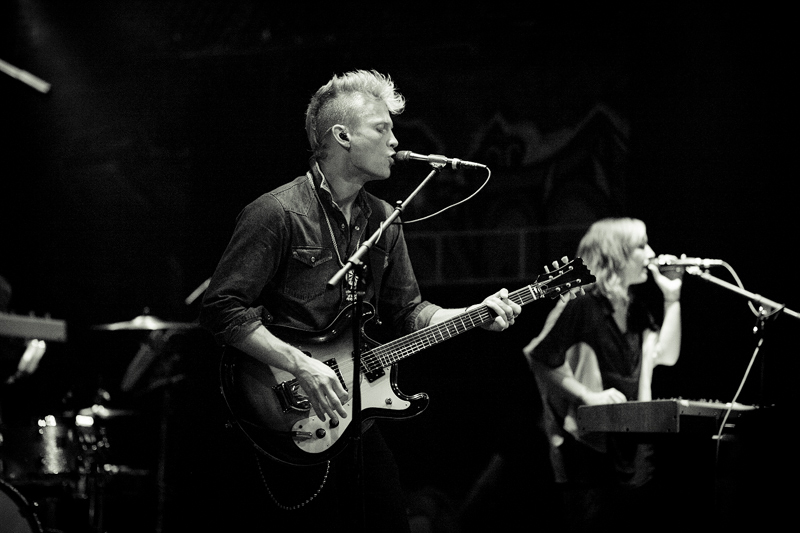 Vancouver-based indie pop band Mother Mother’s strange and compelling pop stylings attract a very eclectic group of people, and all these folks with adventurous haircuts and hipster-chic outfits were palpably excited when the quintet slinked on stage at Reggie’s Rock Club in Chicago. It was a collective fervor not immediately apparent by any obvious cues like thrown panties, but an almost tangible feeling of being a part of something very cool. Some bands make you feel like you’re a part of some super-secret special club.

This hip new Mother Mother club is very exclusive, and the benefits are many.

The main benefit of this club meeting was an hour and a half set of songs that were even better than the album versions. Mother Mother’s albums are great, especially their newest effort, 2012’s The Sticks, but the songs take on a whole new life when played live. The bombastic, rapid-fire chorus “Bit by Bit” hit much harder, and the lighthearted cheerleader-esque shouts in “Infinitesimal” carried much more weight than on the record. Even the simple, stripped down “Dread in my Heart” was a more joyous affair than usual, but how could it not when the whole audience is smiling and singing “There’s a little shitty Devil in my brain.” Oh, and it turns out that “Dread in my Heart” is about lead singer Ryan Guldemond’s uncertain feeling about outliving the Forever 27 club. Take that Songmeanings.com, we got it straight from the horses mouth!

With such vocally-driven material, there were a surprising number of instrumental breaks, and Guldemond was able to show off some excellent guitar flourishes. Drummer Ali Siadat and bassist Jeremy Page have to play simply to serve the pop tunes most of the time, but they got to stretch out a bit as well when the vocals took a break. Sometimes these breaks were longer jams in the middle of a song and some more ethereal jaunts served as smooth transitions between songs. “Infinitesimal” melded into an energetic “Baby Don’t Dance” and a caustic “Let’s Fall in Love” found itself suddenly being the ominous first notes of “Oh My Heart.”

Mother Mother also snuck in two Pixies covers (“Gouge Away” and “No. 13 Baby”) and a Nirvana cover (“In Bloom”), making some of their influences apparent if they weren’t already, but the covers honestly did not stand up to their original material. They played them well, but their originals have such a distinct personality that the covers almost took away from it.

It’s that personality that really helps made Reggie’s feel like a secret cool kid club. Guldemond’s smiling cynicism is infused in the songs of Mother Mother, and it’s a unique breath of fresh air to hear such honest and straightforward lyrical sentiments portrayed so thoughtfully. It is clear the band feels the same way about the audience, as well. I think Guldemond said it best with one of his closing remarks of the evening: “Thank you for coming to our secret party.”

And thanks for having us.