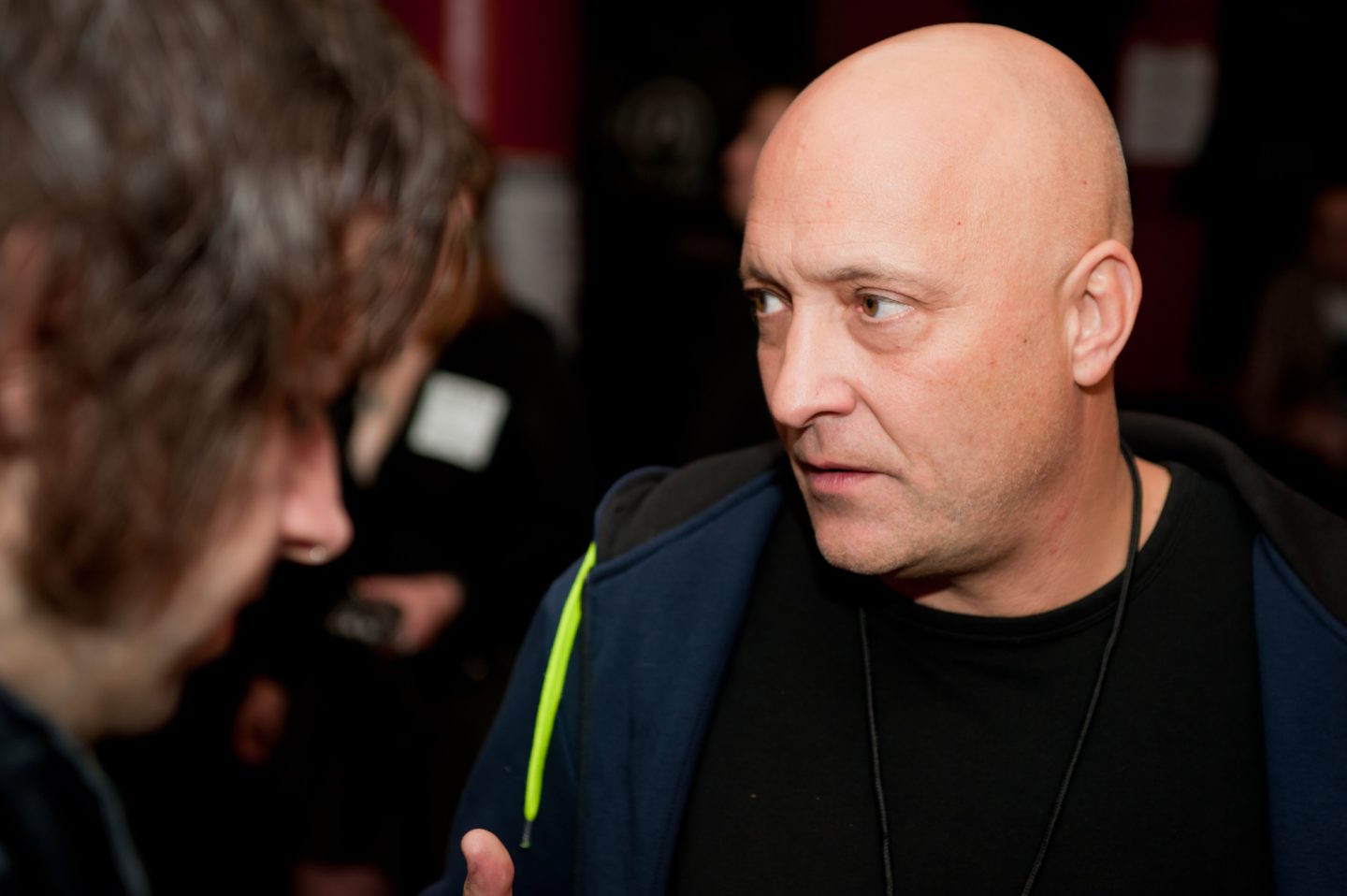 As a huge fan of Throbbing Gristle, Cabaret Voltaire, Nine Inch Nails and industrial music in general, getting the chance to sit down with Patrick Codenys of Front 242 is a bit like being a video game nerd and getting the chance to sit down with the person that created Pac-Man. Both are definitely, unequivocally important based on the merits of their own creations, but they also helped give birth to and influence genres of art that they never would have thought possible at the time. The lasting effect they’ve had on culture as a whole may actually be more important than their individual works themselves. Without pioneers like Codenys (and Front 242), the musical landscape we know today would be irrevocably changed and probably far more boring. You know where we’re at now, but we also have to consider the past to see how we got here.

Front 242 has been active for longer than everyone involved in Lost In Concert has been alive. Talking with Codenys isn’t as much a conversational Q&A as it is a history lesson. It’s a trip down the rabbit hole of Chicago’s past, electronic body music (EBM) and the origins of what many of you would one day know as Front 242. More than that though, it’s an empowered glimpse at the music industry as a whole through the eyes of an artist that’s been there and lived to tell the tale.

One of the few questions we like to ask all artists that have played our fair windy city before is what their favorite venue is. The only caveat is they can’t say “Metro” because it’s the easy, obligatory, obvious, choice, and everyone would say it if we didn’t tell them they couldn’t. Codenys instantaneous response was Medusa’s. As in Medusa’s on Sheffield… the influential 80’s venue that apparently moved to Elgin, is now apartments and has been closed in Chicago for the better part of two decades. Medusa’s on Sheffield may be nothing more than a fond memory for many of us (much like the Wax Trax! Retrospectacle they were in town for), but the die-hard fans that Front 242 has from that era have been joined by a whole new generation of devotees.

If you think about it, that’s actually kind of odd given the fact the band hasn’t been in the States since 2005. But that’s the thing about Front 242 and Chicago. Outside of Brussels, Chicago is like a second home to them. As Codenys puts it, “Chicago is the first city [in the U.S.] that really understood us.” He cites the open-mindedness and the willingness to assimilate musically as some of the key reasons behind that. Personally, I like to think it’s just because people in Chicago have good taste in music. Then again, I’m not an internationally renowned musician, so what do I know? What I do know is that you don’t end up with two sold-out shows at the most popular venue in Chicago with a forgettable name. As it turns out, there’s a lot more behind that particular curtain than even we could have imagined.

Front 242 is an obscure name. Quite honestly, it doesn’t make much sense. If we like the music, most of us just tolerate the oddities of that aspect of the band because it probably means something to someone in the band. The Front 242 name itself has been tied to everything from a UN Resolution to WWII, but neither of those are true. The name was born out of a desire to have a strong name with letters and numbers that was easily convertible to other languages, but it doesn’t actually mean anything. It is, however, the proverbial tip of the iceberg when it comes to symbolism and Front 242.

If you’ve never seen them live (not that difficult to imagine if you’re not over 40, but could always check out the show review), symbols, slogans and codes are a huge aspect of not just the music, but the performance itself. It stems from graphism (expressing things in material symbols), which is something Codenys in particular has always been interested in. Much like modern films, there are different ways to interpret the things presented to you. With codes (like album titles) come propaganda and he’s always felt like all these aspects were ties to the creative process for them.  One of the worst kept Front 242 “secrets” is that some of the album titles are obfuscated by code. “06:21:03:11 Up Evil” and “05:22:09:12 Off” for instance. Take those seemingly ridiculous numbers and convert them to letters of the alphabet. You’re left with “Fuck Up Evil” and “Evil Off.” Would it have been easier to just print that? Aside from the M rating and the fact that Wal-Mart wouldn’t have sold it, probably. But that’s not the point. Doing that wouldn’t be in the spirit of Front 242. The driving force of the band remains the same, but it’s evolved over the decades.

The members of Front 242 are credited as the creators of the aforementioned EBM (electronic body music), but even that term has evolved. According to Codenys, they feel disconnected from that term because “it became a recipe.” When it got to the point where “the softwares made the art,” they realized the moniker, the genre, the music that they were the progenitors of was primarily composed of copycat bands and the innovation was gone. Don’t shed a tear for Front 242 (maybe just one for EBM) though because Codenys is clearly still inspired by everything around him.

Codenys firmly believes that “technology goes faster than ideas.” Technology cannot be substituted for ideas, which is why he likes to keep it vintage. Synthesizers are a perfect example of this. The synthesizer is a bastard instrument, an orphaned instrument.  But when used properly it’s “like a movie and you get to make your own interpretation.” It gives artists a chance to grow. To go somewhere. “The chance to not only find something, but to look for something.” At the end of the day, “what you sell is dreams.” That evasive feeling that we’re all susceptible to? It’s universal. Musical is emotional and it lets people dream. “People need to dream.”