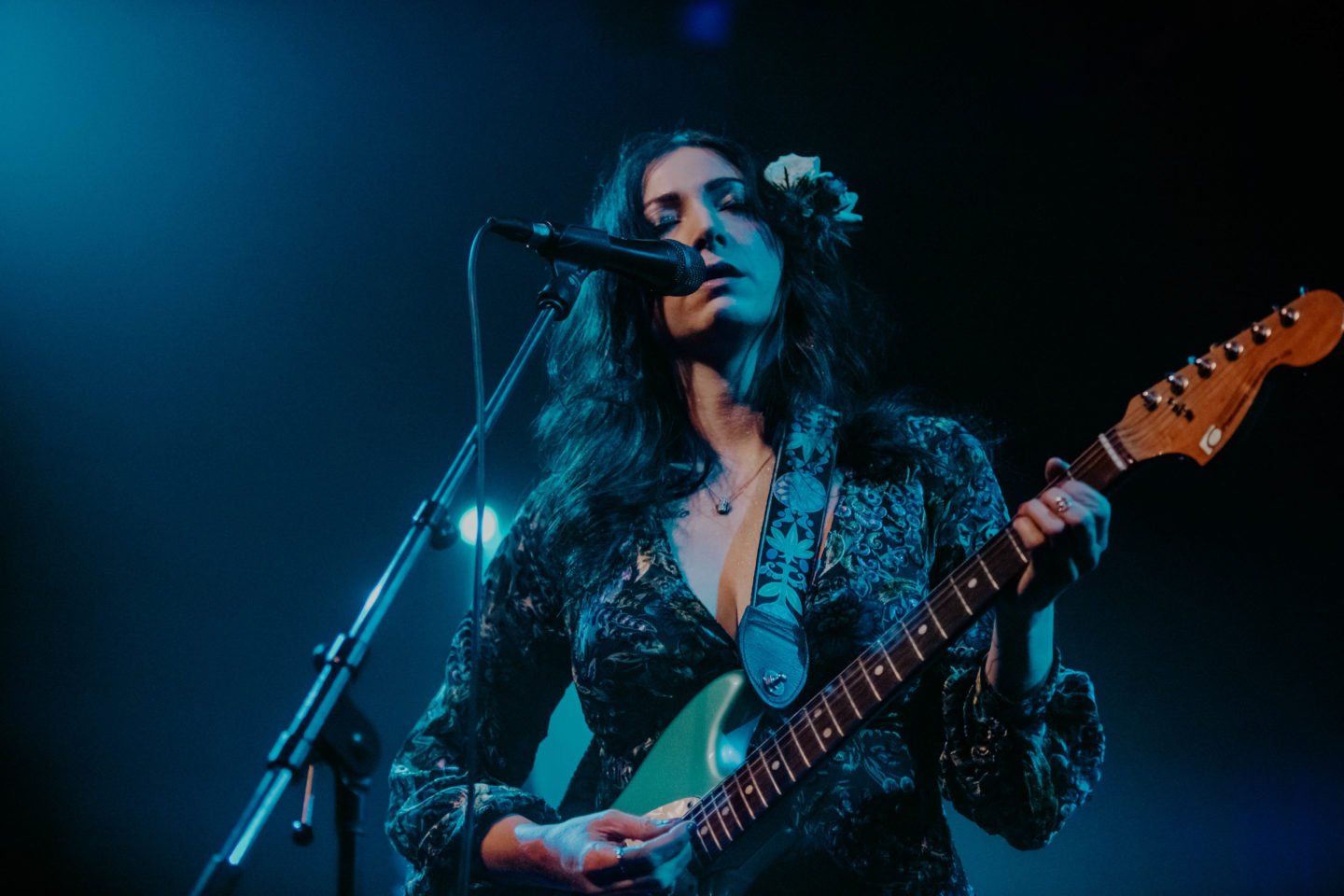 “Mood Rock”, the third full-length album of the Vancouver songstress Jody Glenham, came out in summer 2020, but for obvious reasons, she could not properly celebrate the release right away. Some 14 months later, Mood Rock Prom hit the Fox Cabaret hot and heavy, giving Jody, the city’s self-proclaimed Summer Witch, an opportunity to share the new songs with her audience for the first time.

Dark and velvety Fox Cabaret has been at the forefront of the city’s post-pandemic live music rebirth, consistently hosting both concerts and DJ parties for the last few months. While other bigger venues keep on rescheduling or cancelling shows planned for this Fall, the Fox’s smaller size and serious approach to the health guidelines have allowed the Fox to become an actually safe space for music lovers during these unprecedented times.

The venue started filling in shortly after 7 pm with those who took the prom theme seriously, wearing festive dresses and sparkles, as well as those who dressed up more casually; everyone is welcome here. On the far end of the stage, DJ NO-MAD greeted guests with top-notch classic alternative tunes.

One of the COVID safety measures – having tables instead of GA floor – feels alien at times, especially if you feel like dancing, or want to mingle and make new friends. However, I see a lot of advantages in this “new normal” element of live music shows: you can keep your belongings organized, easily put on layers if you get chilly (or take them off if it gets steamy 😉 ), have a nice drink at the table, and chat with your “table bubble” without masks. This layout worked out perfectly for the Mood Rock Prom: burning candles and stars sprinkled across each table made the atmosphere even more intimate, enchanting, and dreamy.

The show was kicked off by The Established, Shanda Leer, a resident drag performer taking over the role of the prom’s “cool vice-principal”. “The principal” wore a stunning, shiny dress and a hand-made wig, and proved that he’s a Queen of many talents. Shanda Leer truly nailed it all: the jokes, hosting, and a couple of lip-syncing drag performances. The Mood Rock Prom has coincided with the premiere of the second season of Canada’s Drag Race (“which is basically sports for gays”), and Shanda Leer gave shoutouts to four participating Vancouver queens, that he knows personally.

Close to 9 pm, the main queen of the night, Jody Glenham, appeared, followed by her five-piece band, The Dreamers. Wearing a weightless long dress and flowers in her hair, Summer Witch has started her cosmic set with the album opener Barely Alive, and has followed the album’s tracklist in order. Album release parties’ setlists are hardly ever structured this way, but I think it makes perfect sense, as we have gathered here to specifically celebrate Mood Rock, and Jody has been waiting for over a year to present these songs to the audience live. There is a reason behind any album’s track order, more often if the artist is not pressured by major labels and has control over their narrative. Jody Glenham and the Dreamers have translated this narrative into a live performance seamlessly, transporting the audience into a dreamy world of the shoegaz-y atmospheric rock. The lights and sounds came together in a captivating and ethereal, emotional yet calming adventure that is Mood Rock.

The Mood Rock experience, both on and off stage, has also reminded us how closely intertwined the Vancouver creative scene is. The album is a community effort in itself, where every detail, from music to promotion to design, was crafted by multiple local creators and artists (to mention a few, Louise Burns (ex-Lilix, Gold & Youth) has provided some instrumentation and has partially produced the record, and Adam Fink (ACTORS, Blue J, Art D’Ecco) played drums and precision both on the record and at the prom).

During the show, Jody has kindly mentioned that her unforgettable dress was tailored by Ciji,  the venue’s serving manager, and the beautiful flower elements worn by the band were created by Beatrix Floral design, who happened to be a sister of The Dreamers’ keyboardist Jackie. During the eponymous song, “Flowers”, Jody put her guitar down and picked up a beautiful floral bouquet, performing a “he loves me-he loves me not”-like petal picking, and tossing some petals to the audience with a happy smile. A beautiful music video for this song came out in March, and Jody gave a shout-out to the director David Greene who was also in the audience. “I have friends at the front, this is probably what it would feel like to be in a band in high school” – she laughed, referencing the Prom theme of the event.

“How long am I supposed to make you wait? It’s a prom night”

After finishing performing the eight-track album, Jody and her band left the stage only to come back right after, joking “How long am I supposed to make you wait? It’s a prom night”. Jody and The Dreamers performed two more songs: melancholic Wind III (probably her most played song on Spotify) and a surprising, slow, and dreamy version of the typically energetic and fast I Wanna Dance with Somebody.

After the long months of lockdown and isolation, in October 2021, the live music experience seems surreal and movie-like; being back to the venues, both performing and listening to live music seems strange and nostalgic. It feels like a dream – and Jody’s dreamy and moody music and magical performance only made it even more mystical and magical. Thus, as the Vancouver rain was raging outside the cozy venue, dreamy and shiny Mood Rock has officially graduated into the big world.