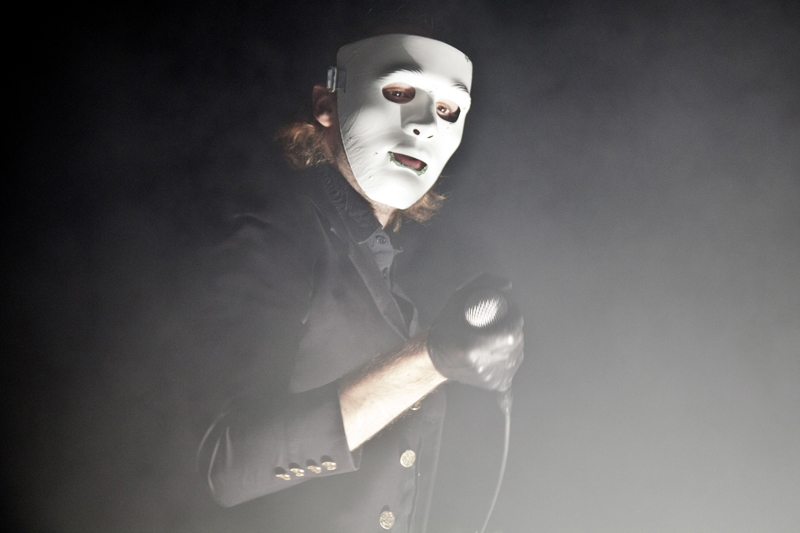 Have you ever been kicked in the nuts while smoking a crack pipe? Or maybe thrown against a barbed-wire fence after skinny-dipping in Vaseline? No? Well, how about spiking a pineapple with your bare fists through a mountain of used tires?

These questions probably sound weird, but I’m not sure there’s a better way to convey how truly unique and simultaneously genius and painful watching Kontravoid perform can seem. This guy might be totally bananas, or he might be the Andy Kaufman of the electronic music world.

Kontravoid (aka Cameron Findlay, previously of Crystal Castles), like a haunted house, loves three things: masks, strobe lights, and fog machines. I say this knowingly because those were the three things I took away from watching him on stage, bobbing back and forth to his blaring, pulsating beats. He’s an absolute showman and, dare I say, a performance artist unlike any I’ve seen in recent years.

Physically, he doesn’t do much, but that’s likely the point. He’s tethered the strobe light to synchronize with the drum machine in his tracks and then stands at the front of the stage singing and/or shouting into the microphone while moving back and forth in some kind of hypnotic routine. When the vocals come through, they sound like a Rammstein track broadcast over AM radio. They’re aggressive and dirty (sonically, I mean – I have no idea what he was actually saying up there) but they’re also a departure point from the music itself, since it offers the greatest variation.

Speaking of those crunchy synths and drones, they are definitely out of this world. Kontravoid employs a digital effect on his keys that sounds like an episode from Season 5 of the The X-Files, and this permeates throughout all his tracks. It’s spooky. But it’s also awesome.

There were a few points during the show that Kontravoid totally lost me. He alternates between two song speeds: blazing fast and dopey slow. It’s when Kontravoid slips into something that passes for “pensive” that I completely check out. While I find it fascinating to watch a guy switch gears so effectively and quickly on stage, all while still maintaining his aesthetic and sound, the juxtaposition of two distinct modes of performance did not encourage my persistent interest.

So was Kontravoid good? Yeah, some of the time. Did I dislike the show? Yeah, at times. But will I ever forget the performance? Absolutely not – that shit was bananas.