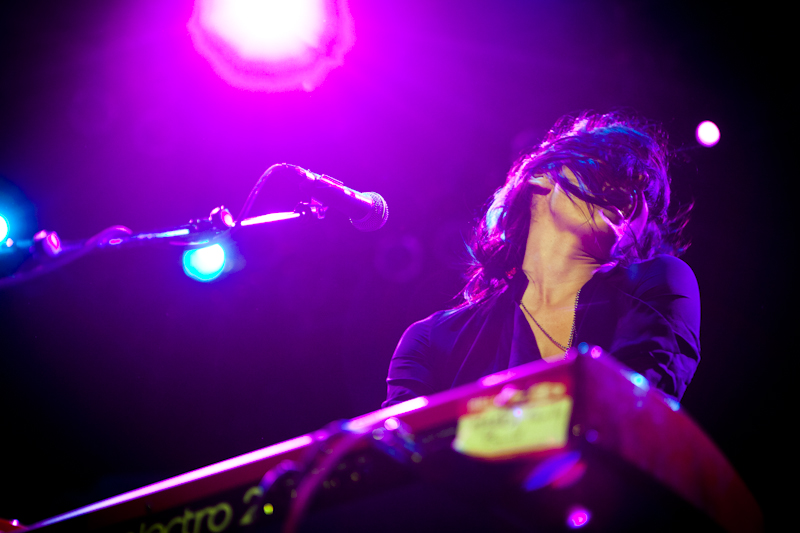 You might not use the word “sexy” to describe many families. Okay, maybe the Pitt / Jolie tree has some things going for it – but so does the Kopecky Family Band. As openers for DeVotchKa, they brought their playful and heartfelt music to the House of Blues.

This group out of Nashville is not actually related by blood, but they jam together as if they grew up playing instruments side by side. Leading on vocals as the singing heads of the family are Gabe Simon and Kelsey Joy Kopecky; each who have inviting voices that complement one another, comparable to the male/female vocal contrast of the band Stars. The timbre in his voice is masculine with the right dose of vulnerability, while hers is both self-assured and lovely.  While each of their singing talent can stand alone, you like pairing them together. In other words, if Gabe is a warm cup of tea on a cold day, Kelsey is the honey. “The fam” is rounded out by Ben Kaufman and Markus Midkiff’s gorgeous strings on violin and cello, Corey Oxendine’s bass lines, David Krohn on drums and Steven Holmes on lead guitar.

The signature charm of the band can be found in the stark whistling at the start of songs like “Birds” or when Gabe quickly switches his guitar out to rock a trombone. Joyful song in unison on tracks like “God and Me” winds down into hand-clapping rhythm. Kelsey Joy was shaking her messy black hair over the keys and bassist Corey was going wild on stage. You could catch the exchange of smiles between Markus playing bells and Steven on guitar. With vibrance and confidence in spades, the Kopecky Family Band is just a happy sexy party of talent that is a joy to see.