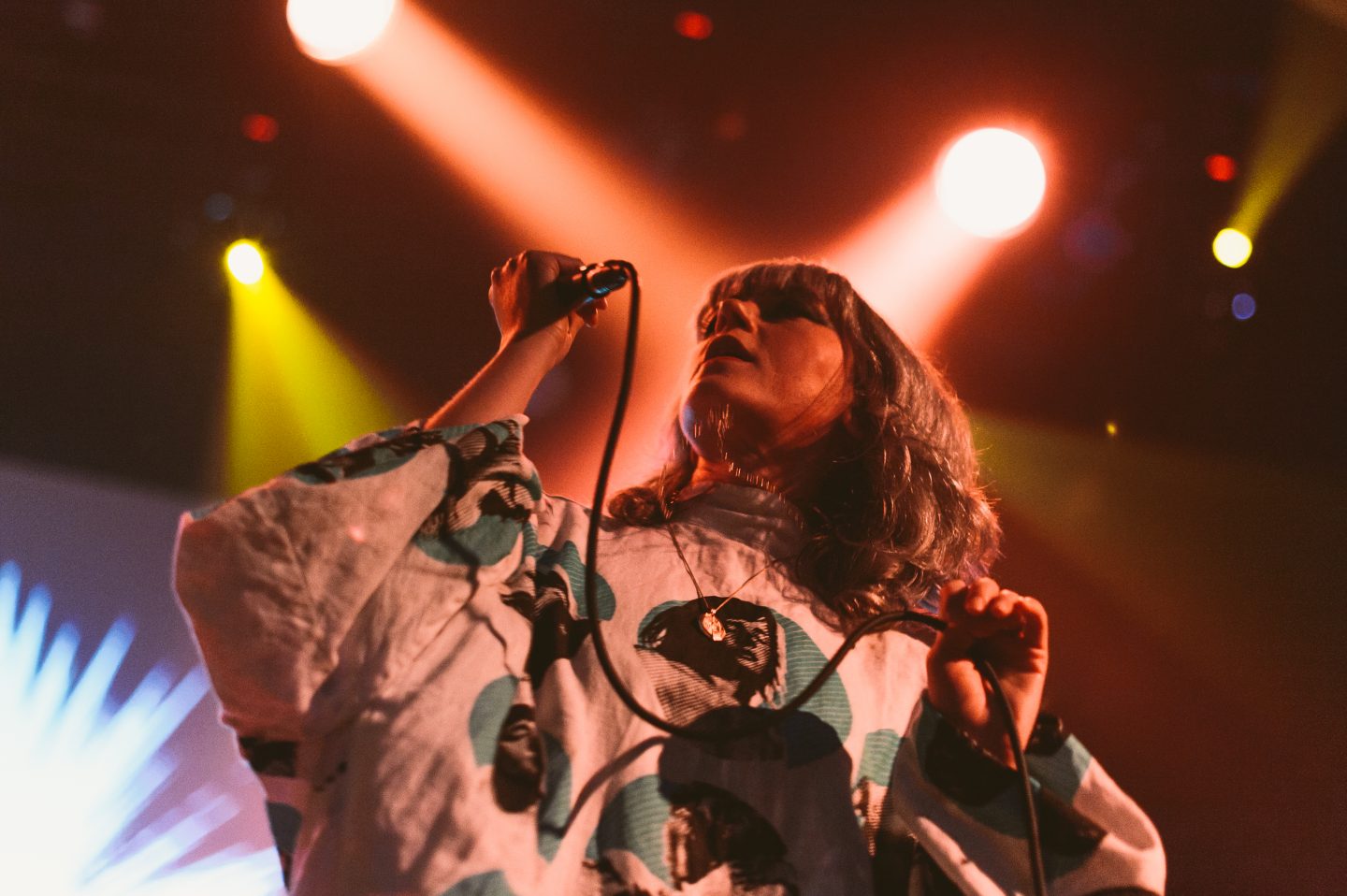 Ladytron at The Neptune Theatre

Every 7 years our cells completely regenerate. We are essentially a new person. Perhaps 8 years after Ladytrons last album, they too were different. A response to place, time and life, provided us with songs of reflection of our shared experiences as humans.

Black shirts, leather, single dangling earrings and gender-neutral eyeshadow. The crowd hosted many different backgrounds and ages, a mirror of Ladytron; new, old, artsy and punk. Surrounded by stained glass of gods and goddesses, and tall ceilings with something to look up to. Ladytron.

As we waited for Ladytron to take the stage, “Forever Autumn” by Jeff Wayne played, paired with a projected image of their 2019 album cover of a couple leaving their car and running into a burning forest. Lyrics like

“Never before in the history of the world, had such a mass of human beings moved and suffered together”

rang into our ears foreshadowing what was to come of the evening.

Vocalist Helen Marnie of Ladytron stepped out like the goddess depicted on the stained glass of the theater. Wearing a white flowing artsy momo that was far from what my Grandma Genny wore. Miro Aryoyo donned a black turtleneck dress and began singing “Black Cat” from their 2008 Album, Velocifero. The lyrics are Bulgarian, backed by heavy synth and a steady booming pulse. The entire band, each eccentric and abstract had me wrapped around their finger.

With dark, electronic, pop undertones that made you want to sway your hips and shake your head. Songs like “The Island”, “Paper Highways”, and “Animals” all rang true with current culture. Topics centered around technology, global warming, mass extinction and a lost sense of what it means to be alive. The visuals felt immediate, lonely, and isolating. Patterns of people floating around like our monotonous culture desperately trying to break free. A dystopia that has already begun.

The band closed the night with the seminal “Destroy Everything You Touch” and “Seventeen” sang by most of the crowd. But these songs didn’t seem as relevant. The old cells of Ladytron had indeed shed, and they were wise with new truths and important visions of the future. The 2019 self-titled album Ladytron is one to spark up when you’re feeling pissed at the world and all you want is to rage and dance. Heed the warning.

Morgan Saint at The Neptune Theatre

If I told you I was broken would you love me still?