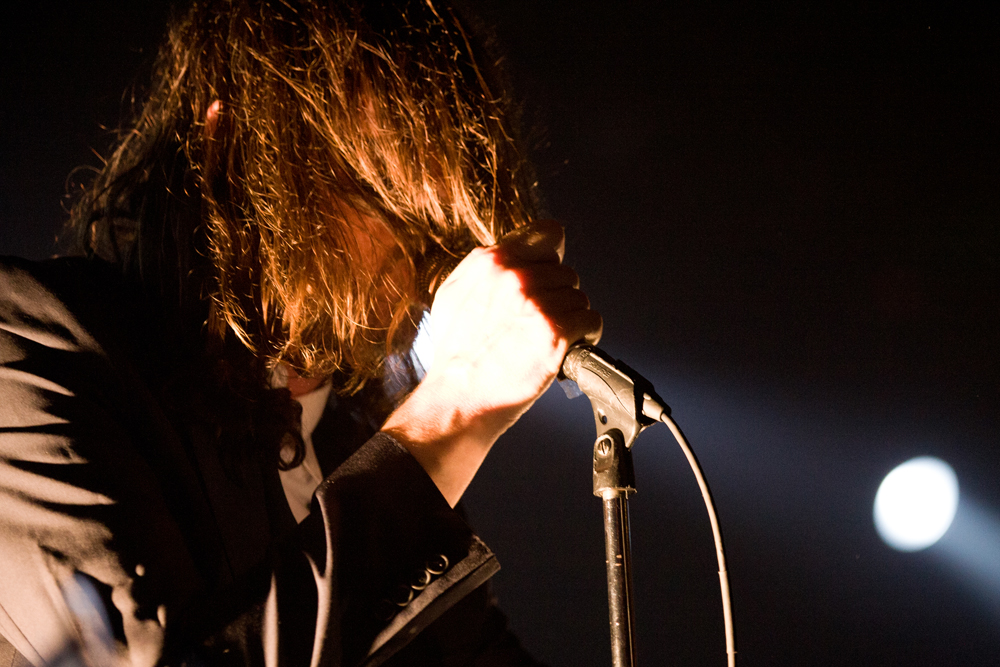 The light slowly rises stage right like the sun coming up over the horizon… and then it creeps over the bottom of the window sill and hits you in the face like you were out drinking all night mere hours ago. You throw your phone and roll over so that you can squeeze in another nine minutes of sleep.

Everything confirms you’re still in a dream state. The noise that surrounds you is washed out and somehow dulled–like the sound of waves crashing on the beach as heard through a seashell. There’s a voice that beckons you into consciousness, like a siren song attempting to wake you from your slumber, but it’s just out of reach. Then there’s the crash of a bass drum. Just like that, it’s over. The idyllic, lemming-esque head-and-shoulder bop is replaced with a much more jarring, almost mentally dislocating, cadence as formal as the attire the “Liars” are dressed in. They stand on stage illuminated musically and visually like Patrick Swayze in Ghost… if he was responsible for playing himself and the Righteous Brothers.

On some level, everything that comes off of the stage just sounds like noise. The noise that would come from a stage occupied by the likes of Radiohead–if the car accident screwed up more than one of Thom Yorke’s eyes. That’s not a bad thing. It’s not a great thing either. It just is. It’s Radiohead mixed with Beach House. An Orwellian drum machine operated by a skilled technician through the haze of the hangover that you (and I) know is inevitable. It’s unconscious. Cerebral. Disjointed. Disconnected. Chaotic. Grating. Tempermental. And yet, somehow, it’s also downright “lovely” in the chaos. The type of perfect chaos that defies description and cannot occur naturally. It’s manufactured. Actually, it’s orchestrated. Orchestrated by Liars.

Liars isn’t music to sing-along to. Hell, it’s music you might not even like. At times, it’s a dream. Others, a nightmare. Liars are the yin to their own yang. The Batman to their Robin. Jordan to Pippen. Lohan to cocai… well, you get it. But honestly, if you’re in the mood to unplug and go on a mental vacation, Liars is some shit you’ll seriously enjoy live.