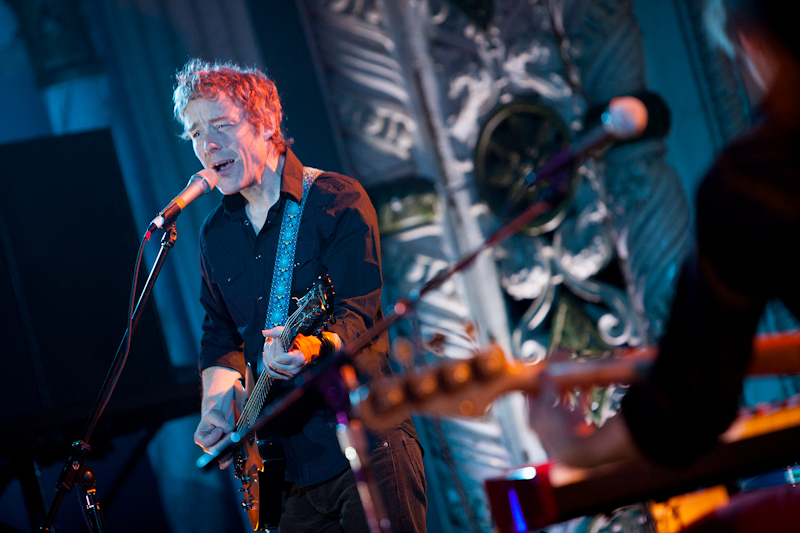 After a long week, and more specifically a hectic Friday I honestly wasn’t as enthused about being at a concert as I normally am. Wasn’t in the mood for crowds bumping into me, wasn’t looking forward to sweating out all the liquid I consumed throughout the day—and I definitely wasn’t looking forward to my ears ringing for the next few days. Mentally yes, I was in full on scrooge mode. Luckily for me, the Metro was hosting Low. The trio from Duluth put on a display loaded with slow tempos and chilling harmonies topped with their minimalist approach to music.

It was the type of music that fits perfectly while driving a dim lit road. The sort of sounds you enjoy while lying around with the lights off, reflecting on your day. Often the drummer and bassist were the backbone for the mood. With frequent use of mallet and brushes on the kit along with songs absent of all bass, the stage was set. The literal stage was fashioned with a large backdrop used to “paint” various scenes. To be honest it may have distracted me from the musicians a bit, but overall the visuals were a nice addition to what was audibly going on. Images from Houdini-esque (possibly actual Houdini footage) stunts to shots of the Duluth scenery sprawled out behind the group. The visuals were slightly eerie, yet entirely fitting.

A similar vibe was found within Alan Sparhawk and Mimi Parker’s vocal harmonies. With their calmer, more relaxed parts they seemed to be channeling folk duets from music’s past—sounds reminiscent of Joan Baez & Donovan, or Ian & Sylvia. The dynamic of that texture layered over this rock feel creating intrigue and a more entertaining concert experience. The night was not all relaxed however.

Each song had calculated climaxes which were preceded by long building crescendos. As soon as the heightened energy was reached, the bottom seemed to drop out in the blink of an eye, returning the decibels to a safer range. A high level of musicianship was demonstrated in achieving dynamics of this variety. As impressive is that is, I selfishly wanted the highs to last a bit longer. I wanted more. More time for the crowd to rock out to. More moments like Sparhawk mouth picking his guitar solo. It was plain to see why they’ve been around for 20 years. The crowd ate up their spot on performance. And although the setting they painted for my Friday night was just the mood I needed; I was left wanting a little bit more.