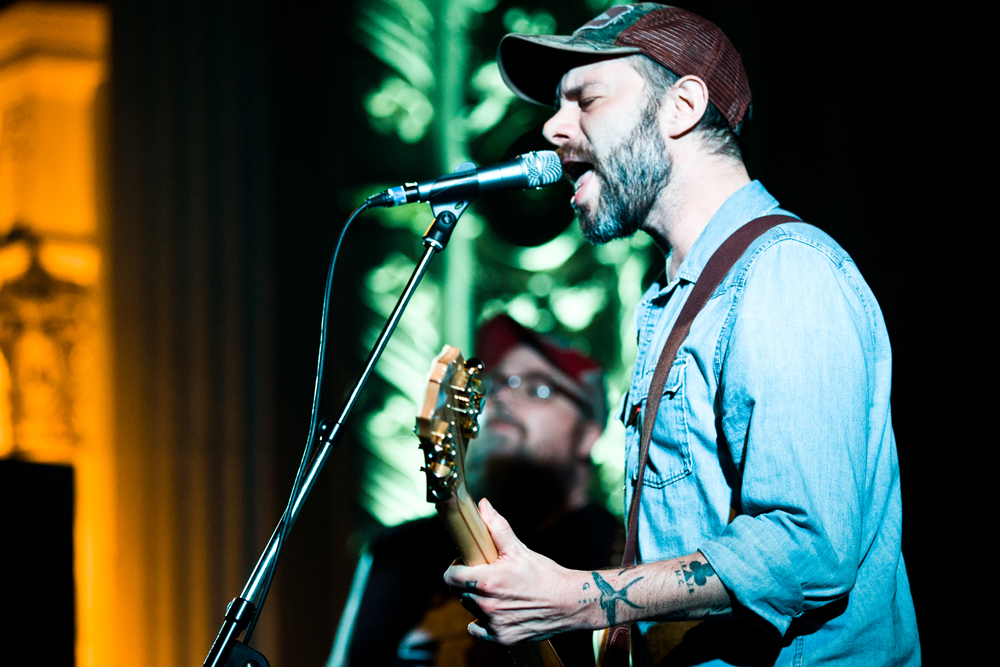 Lucero, what are they? Is it Punk? Is it Country? Should we call it Punktry? No, we should never ever call anything Punktry. But what is the right answer? Honestly, who gives a shit. It’s fucking fun and that counts for everything.

These dudes aren’t new to the scene by any means. Originally from Memphis, TN, they have been around for close to 15 years touring almost constantly the entire time. Rarely using a set list, it’s hard to tell what you are going to get at a Lucero show. They love what they do and they do it well, so even if you don’t know what you’re going to hear you know you’re going to love how it sounds. It sounds exactly like what it is: good ol’ fashioned ‘Merican fucking Rock & Roll. If you don’t like that than fuck right off. Eight albums later, it’s easy to see why they played to a sold out crowd. With raspy vocals about bad tattoos, broken hearts, empty bottles and raising hell, there isn’t a person in the crowd they don’t speak too. Add to that a live horn section and a band that loves to party as hard as they love to play, and there is no way you aren’t going to have a good time.

Normally my tolerance for how long a band plays is pretty low. Get in there, give me your all, play it hard and fast and then get the fuck out so I can be home in time to watch an episode of Game of Thrones OnDemand. But when I heard Lucero’s set was two hours long I next to pissed myself with excitement. I was not let down. They wanted to be there as much as the crowed wanted them there. Playing a solid mix of fan favorites (Hey guys, are you reading this? More Rebels, Rouges & Sworn Brothers please) and stuff off their newest album, “Women and Work.” They seem to have added a few new horn guys to this tour and it shows. It upped the already electric energy tenfold. “All Sewn Up” was an all-out rager on stage & easily my favorite song of the night, second only to “Kiss the Bottle” because, um hello, JAWBREAKER.

Great music aside, what I dig most about Lucero is how completely normal these guys are. Does Ben Nichols have a voice that could melt the panties off of any woman ever, including the lunch lady from junior high school that may have been part Succubus? You bet your ass he does. Does he act like it? Not even close. I mean, fuck, this guy is like Ryan Gosling for us white trash girls. Hey girl, you like scruffy beards, smelly flannels, and drinkin’ whiskey? Yes. Yes I do. But not once does anyone on that stage give off a vibe that says im here to play, get paid and get out. If anything it’s the exact opposite. On more than one occasion they joked about finishing up their set so they could hit the bar next door. Best part, everyone’s invited. First round is on… well honestly, it’s probably still on you, but hey, a party is a party. That’s the beauty of this band; from dudes who idolize Larry the Cable Guy to chicks in ripped fishnets and miniskirts, everyone’s invited.