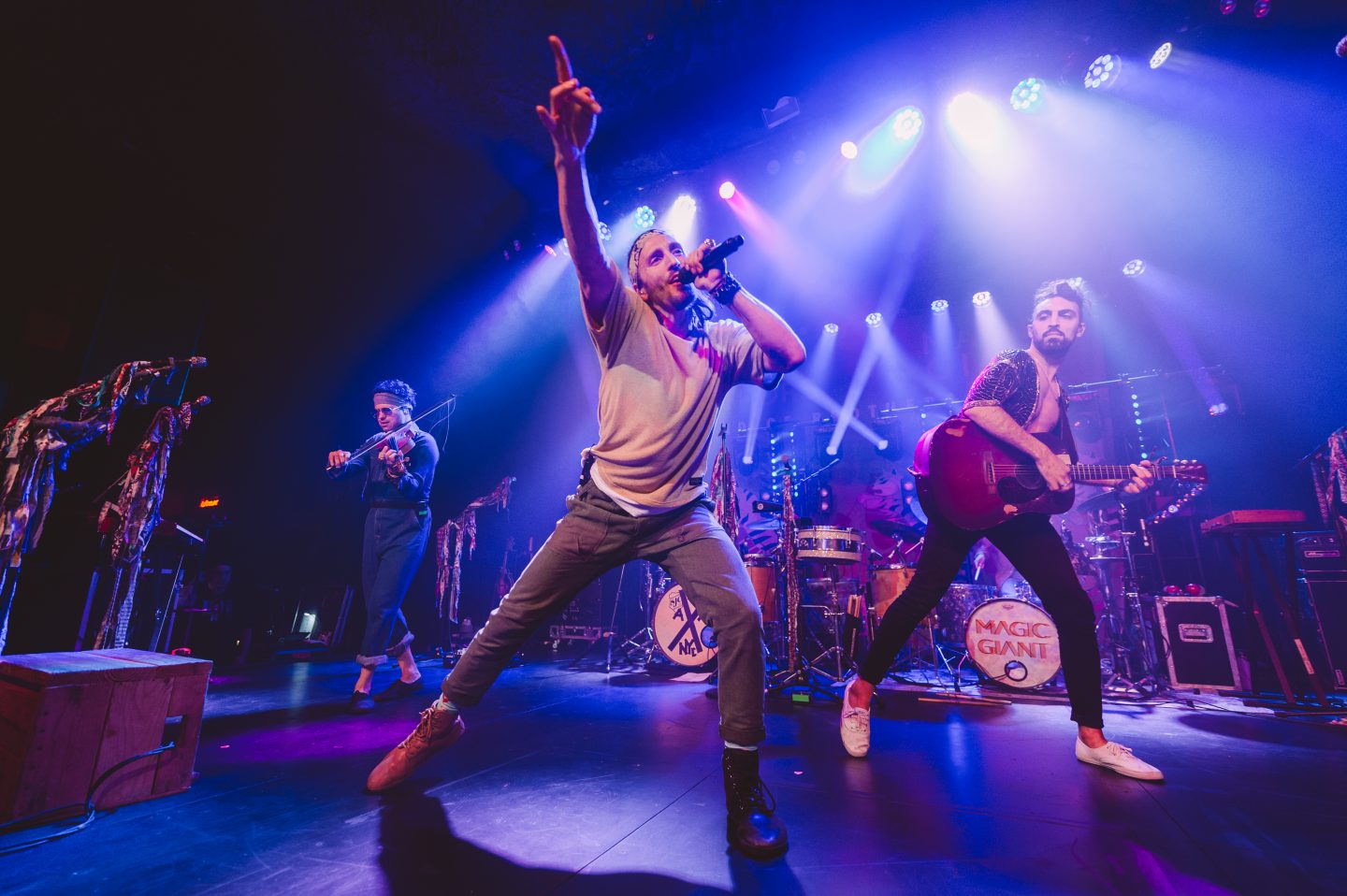 Magic Giant tapped into the collective youth of the audience, providing a true escape to live in the moment for a couple hours. The audience wasn’t entirely familiar with Magic Giant but took only about 30 seconds to become engrossed in the performance of this LA band.

When they took to the stage they automatically launched into an enormous set and brought some serious energy.

Performing their first song on stage,  one of their more popular tracks, “Celebrate the Reckless” lead singer Austin Barrow had the entire crowd moving along and cheering, motivating some pretty advanced audience interaction. In celebration after the song,

Barrow shouted into the mic, “…And they said Seattle didn’t dance!” to more cheers.

Saturday’s performance by Magic Giant at the Showbox Market carried on in this way throughout the evening. The band has an ease about them that Seattle fans could really vibe with, both their fluid performance style and their carefree lyrics. Whatever the combination, it was clear that old fans and new were ready to follow Magic Giant’s lead to live in the moment for a couple of hours.

Their set felt really special. First, they were touring in part to support The Melodic Caring Project, streaming the show to hospitals around the world, allowing kids that are in the hospital to have front row seats. It was quite uplifting to see Barrow call out names and user names of kids, giving them a virtual VIP front-row ticket, when they otherwise wouldn’t have been able to leave to see such a show.

Secondly, they were not wanting for talented musicians. Who really shined during this show was multi-instrumentalist Zambricki Li, whose fiddle bow was torn to shreds by the end of his monstrous performance.  Lead singer Austin Barrow took turns on backup synth and percussion as well as one intimate acoustic number in the middle of the crowd, really showing that this band has quite a bit of

versatility as musicians and as well rounded entertainers.

The format in which Magic Giant played with their touring partners, American Authors was also quite unique. While American Authors were the headliner, they went on first and started what seemed to be a house-band style performance.  The bands switched back and forth throughout the combined set, playing a few songs before rotating and letting each other take the spotlight. This gave way to some exciting cooperative numbers. Throughout the performance, it became harder to tell which players belonged to which band, as they would swap musicians for particular songs and solos.

A big highlight of this collaborative format, mid-performance was a cover of Simon and Garfunkel’s “Cecilia” performed by both bands, and the majority of the crowd at full voice. Another were some particularly enthralling dueling solos between Magic Giant’s Zambricki Li and American Authors’ James Adam Shelley. For me these solos were the high points of the evening, garnering some room-shaking cheers from the audience as they played atop the monitors at the front of the stage.

Watching Magic Giant play, you could tell that they were incredibly energized by playing in front of this crowd; the size and the level of interaction had all the band members grinning while playing throughout their set. The sense of play that they had throughout gave the show a fresh quality that is tough to explain. But everyone felt it.

it wasn’t just another stop on the tour

it was downright incredible

Just in time for Valentine's Day: Make You Mine