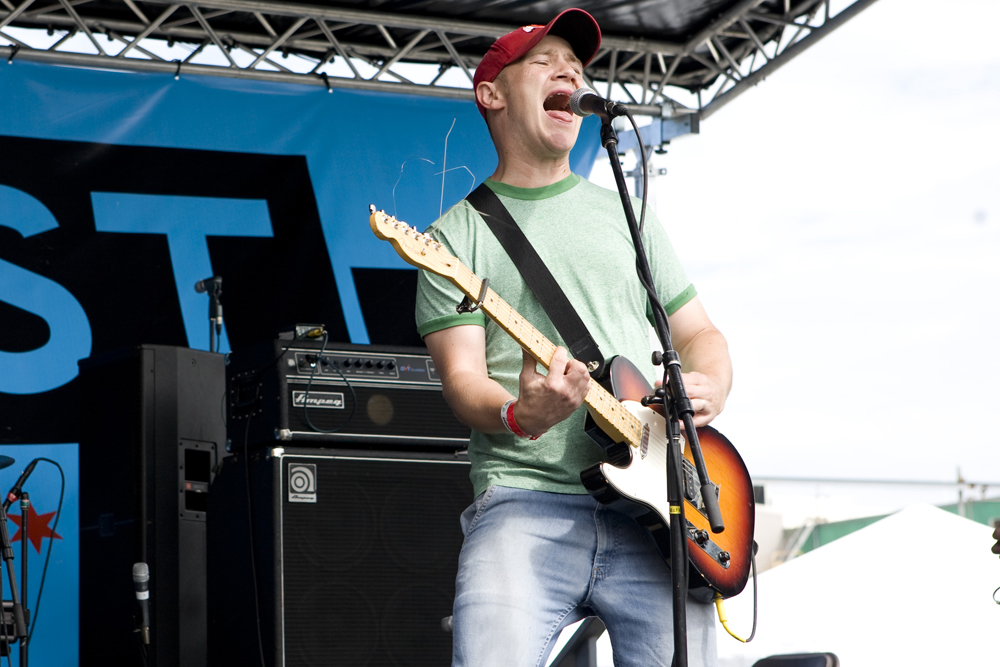 On a gorgeous and sunny 70 degree Saturday, Milwaukee band Maritime was the second band to take the stage outside The Hideout for A.V. Fest.

A really good word for this band is “refreshing”. Maritime offers wonderful upbeat tunes infused with rock that have just enough pop appeal to show mainstream potential – but offer enough harder hitting moments to qualify as a quartet of rockers. Me-thinks they could be likened to a heavier version of O.A.R. Infectious high energy from lead singer Davey Von Bohlen and thrashing cymbals from drummer Dan Didier are complemented with the synergy of Justin Klug on bass and Dan Hinz on guitar.

The band played many new songs from their latest album, Human Hearts, which was released in April of this year. Album standouts like “Air Arizona”, “It’s Casual” and “The Peopling of London” had the crowd joyfully nodding to the beat under a clear blue sky. Frontman Von Bohlen radiates enough energy for the group as a whole, lunging into song transitions and often smiling as bright as the sun. Whereas many musicians “put on a show” when they’re bouncing around on stage, Von Bohlen’s movement to songs felt entirely authentic. He’s sincerely connected to the music and that comes across in every way. While all four members play a tight set as a whole, Von Bohlen’s stage presence is most closely matched by Didier on drums. Offering one dose of invigorating drum lines after another, there were moments when he looked like he may have been in a percussion-induced trance. In fact, the balance of Von Bohlen’s warmth and Didier’s ardor makes a great metaphor for the band’s overall essence; a harmonious combination of well crafted inviting melodies paired with intense percussion that is not often aligned with “make you feel good” music.

Another enjoyable detail from this show was the troop of adorable young children related to the band members that were gathered to the right of the stage. While he didn’t outright say it was his son, Von Bohlen had a very playful rapport with a young boy in the crowd who he jokingly accused of heckling him. He also introduced one of their songs as something written “before they had kids” to which the same little boy shouted, “I heard that!” How cool it must be for those kids to see their fathers rock out on stage. Coolest Dads in Milwaukee!

Whether you’d love them for their catchy music or their rock star parental charm, give some time to Maritime and you won’t look back.