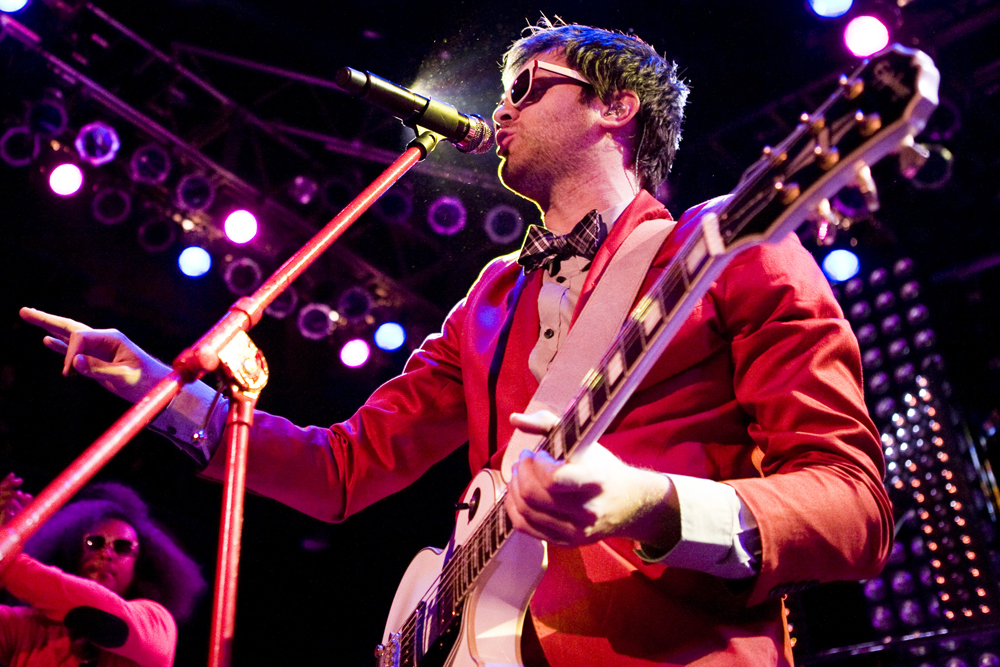 Not since the days of the famed Rat Pack has there been a male singer who offers talent, swag, style and class all in the same package. Enter Mayer Hawthorne, the young fellow with an old soul bubbling over with the spirit of Motown. From his sharp suits and bow-ties to his endearing “how do you do” greetings, he’s memorable – and that in itself is quite the accomplishment among a sea of artists on the rise.

With a tad more than a 5 o’clock shadow on his jaw, Hawthorne was a little scruffier than we saw him last when he played the House of Blues Chicago, but still as smooth as ever. Decked out in a tailored orange suit to match the preppy-dressed band members of The County, he wore sunglasses in lieu of his usual black-rimmed glasses – and jumped right into modern songs that pay homage to Motown, jazz and even a nod or two to reggae. Hawthorne and The County played tracks from the newly released How Do You Do and 2009’s A Strange Arrangement. The latter had a lot of songs about love and lust, and although How Do You Do was surely seen through Hawthorne’s glasses, they are less rose-colored this time around.

Despite being genuinely pleasant, polished and sophisticated the new song “The Walk” is as close to an audio “Fuck you” about love gone sour as you can get. Hawthorne sings, “So long you did me wrong / Yeah you can walk those long legs baby out of my life / From the moment that I met you I thought you were fine, but your shitty fucking attitude has got me changing my mind.” It’s actually all too easy to miss the bitter words because they are coated in sweet Soul goodness and delivered by Hawthorne with such panache. “Dreaming” was also played off the new record, which Hawthorne introduced as a new song but without any commentary. Would have been interesting to hear more about what inspired the song, as it’s lyrics offer vague frustration; “I’ve known all along there’s no restitution for what we’ve done / No explanation and I just can’t fake it anymore.” Again, despite deeper meaning likely born of a negative feeling, the song sounds so delightful and uplifting that most people in the crowd were swaying to Hawthorne’s soothing voice without a care in the world.

It has to be noted that a great part of seeing Mayer Hawthorne live is that he brings personality to each show. He asserted that he expects to see people dancing up front and will send party poopers to the back. He took a photo with the full HOB crowd behind him but to make things fair, then posed like a mannequin to allow fans to catch the frozen moments in photos. The band was in on it too so for about 20 seconds, the stage looked like video playback in slow motion. Very cool, funny and original.

We’ve heard the term before that great singers could sing the phone book and still captivate an audience. This compliment applies to Mayer Hawthorne but it goes beyond his voice. He’s a gifted songwriter and great performer with a strong grasp of what feels authentic. Watching him perform is like the idea of snuggling under a blanket with hot chocolate in the middle of winter; it just always sounds good.