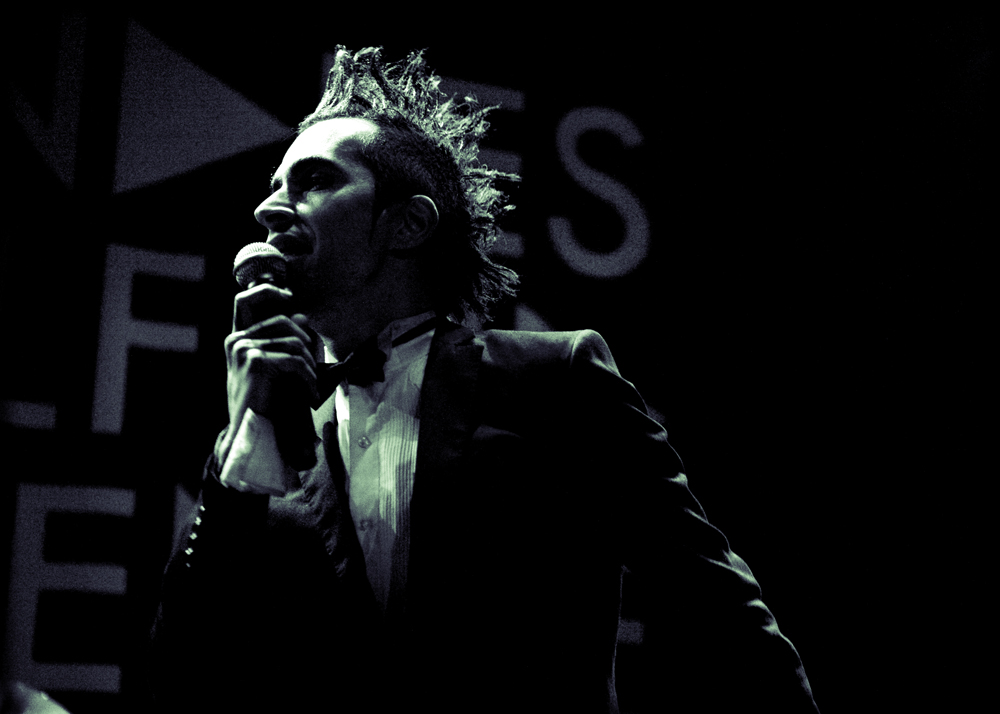 Mindless Self Indulgence at House of Blues Chicago

In case you couldn’t tell by their music, Mindless Self Indulgence is not for the faint of heart. Calling MSI a cacophony wouldn’t be too far from the truth, but it doesn’t quite address the level to which they’ve perfected it. Outside of the appearance of Jimmy Urine’s dog Chauncey (which is apparently ending after this tour), everything outside of a quality set list is up for grabs. Will there be urination? How many people are going to get naked? Will clothes fly at the stage? Who has the most visible cutting scars on their body? No one is ever quite sure of just how ridiculous an MSI show is going to get, but you can be sure of one thing: it’s impossible to have a bad time.

“In the future there will be way less Nickelback but way more Milli Vanilli.”

Jimmy Urine appears on stage with a coat painted with the MSI lolcat mantra–MSI SEZ RLX–and immediately launches into “Shut Me Up.” The crowd goes berserk. The band goes berserk. Everyone’s berserk. MSI doesn’t need to wait for a fucking encore to launch into the hits that people really want to hear. Little Jimmy Urine doesn’t need to wait until the end of the show to throw himself into the crowd (Calling it a mosh pit would be the understatement of the year because the entire floor of the House of Blues was shaking at this point in time.), he’s going to go on the first song. It’s important to note that, at this point in time, it was like 7:35pm. On a school night. MSI doesn’t fuck around when it comes to making sure their fans are happy.

“Where the fuck is my Tardis you stupid motherfucker?”

Urine, the mohawked master of ceremonies, bolts from one side of the stage to the other with a passion and energy that borders on psychotic. He’s on the drums. He’s on the speakers. He’s in the crowd. Unless you follow his melodic, nails-on-a-chalkboard screech very carefully you probably won’t have any idea where he is at the moment. There’s a guy in a panda suit. Some asshole gets yelled at by Steve, Righ? for using a laser pointer. Chauncey, Jimmy Urine’s dog, has a last wish. He wants to wear people clothes one last time. Dresses, shirts, hats, pants and every other manner of clothing start flying over people’s heads on a trajectory to the stage. Most pieces make it, some end up hitting you in the face.

Mindless Self Indulgence isn’t just a name, it’s a mission statement. They might be on an elevated platform with instruments and taxidermy dogs doing 50-yard dashes and backbends, but they’re not the only ones having fun. Each and every person in the audience that contributes to Hot Topic staying in business was having just as much (if not more) fun. So what if it’s a school night and we all have shit to do tomorrow? Is that any reason not to party with a bunch of people just as fucked up as we are? I don’t think so.