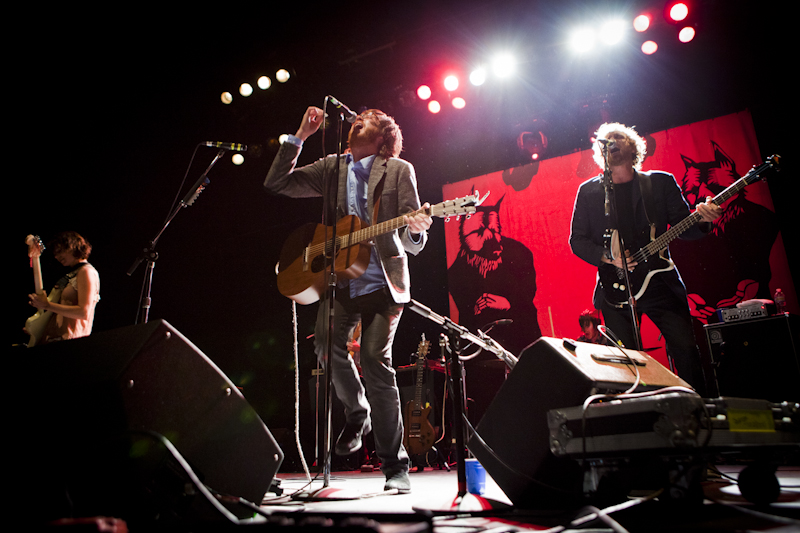 Okerrvil River at the Vic Theater

Let me just start this by saying that I have never been as blown away by a band I’ve never heard of as I was with Okkervil River. The first fifteen minutes of the set alone made me seriously question what rock I had been living under for the last few years to have never heard of them. The band has quite a few oddly tiny instruments, but the sounds that come out of them in the hands of their talented masters is nothing short of mind blowing – and it all starts with the bearded man in the sportcoat that could easily pass for a college lit professor.

Will Sheff is more than just the professor of pick, the teacher of thrum or the rabbi of reverb, he’s the beating heart of the band. Layered atop his own abrupt acoustic strums, his normally soothing voice takes turns towards a more gruff, primal roar that enunciates the emotion behind the lyrics. Couple that with iterative percussion and drums and violin and mandolin support that’s nothing short of symphonic and it’s not too hard to figure out why this band has ripping the indie circuit a new one for more than a decade. But again, as Sheff is the only remaining original member, he’s the musical glue that binds.

There’s something foreign and yet inherently familiar about elements of each of their songs. There are elements of Robert Smith in the vocals. Elements of The Hold Steady and The Antlers and Bright Eyes and Dispatch and Tom Petty that you can pick out of the indie haystack like little needles. People say Okkervil River is indie folk rock, but it’s not. It’s Robert Smith as an English lit professor driving a VW van with Tom Petty riding shotgun and Dispatch in the back – crashing through a Mardi Gras Indians Second Line where everyone has tiny instruments. A recipe for disaster in anyone else’s hands, but Will Sheff and the other members of Okkervil River make it look and sound like second nature.