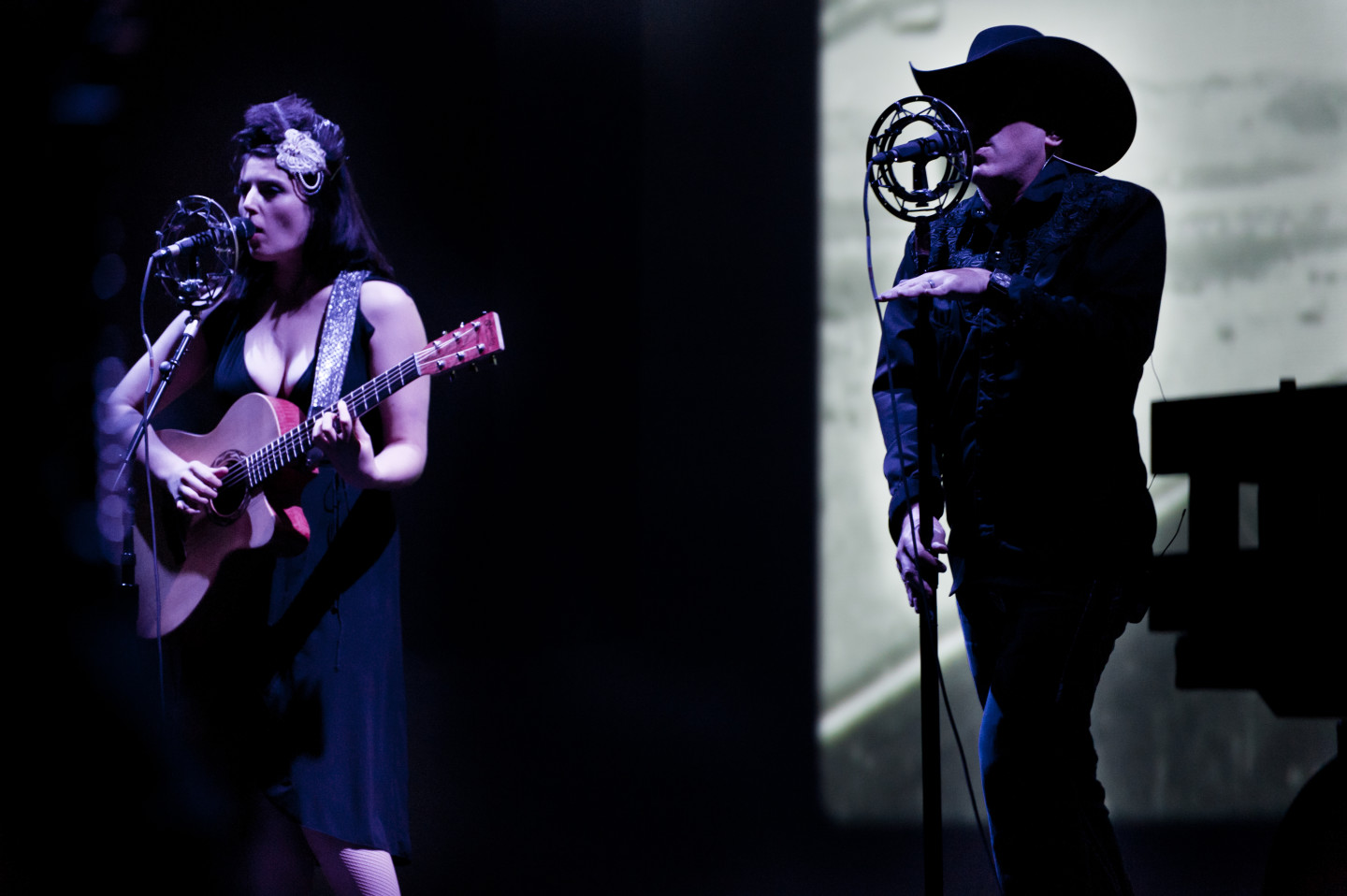 Puscifer isn’t just the band/project/stream of consciousness endeavor that Maynard James Keenan (Yes, THAT Maynard.) uses as a moniker for his solo work, it’s the highway exit on a journey of creative self discovery. Maynard will be the madman behind the wheel for tonight’s festivities.

Picture yourself riding shotgun in a beat up jalopy barreling down a dusty desert road at eighty miles an hour in the middle of the night as you watch your entire life flash before your eyes and everything around you spins blissfully out of control. The man behind the steering wheel is a cowboy hat adorned man still wearing sunglasses with a face that’s almost featureless because of the shadow that looms over his face. Seated between the two of you on the bench seat is a woman that easily doubles as a 50s pinup girl. Bouncing around in the bed is a collection of other co-conspirators that are important to your journey and would never be left behind, but are overshadowed by the company you keep in the slightly-more-safe confines of the cab. A slow rumble starts from somewhere you can’t quite pinpoint as the man leans over and assures you that everything’s going to be ok in a voice that you immediately trust.

Puscifer isn’t a collection of objects on stage used as set pieces. It isn’t just an Airstream trailer, picnic tables, wine and a hayrack. It’s also not just a group of talented musicians operating instruments with precision normally reserved for the orchestra pit at the Cadillac Palace Theater. The vintage films rolling behind the band and the shtick infomercials all add to the ambiance, but they’re not Puscifer either. Puscifer isn’t just Maynard either. Puscifer is a fucking experience.

If H.G. Wells were living in the deserts of New Mexico during the late 40s and decided to start a band with instruments he invented himself, that might be kind of like a live Puscifer show. Take your favorite cowboy, turn him into a metal musician and that could sound kind of like Puscifer live. Give Jean-Luc Godard the freedom to do whatever the hell he wants and the end result has the potential to look like Puscifer sounds. But really, feeling Puscifer live is an invitation-only trip to an alternate reality where corsets, cowboy hats, sideshows and Airstream trailers dissolve seamlessly into the world of the paranormal and the electronic–with a beer line.

It’s not often that I use the word transcendent to describe a live musical performance, but Puscifer fits the bill. Puscifer wasn’t just a concert. It was a one night only spectacle that we had the pleasure and fortune to document. You owe it to yourself to be at the next show.

The Felice Brothers at the Vic Theater