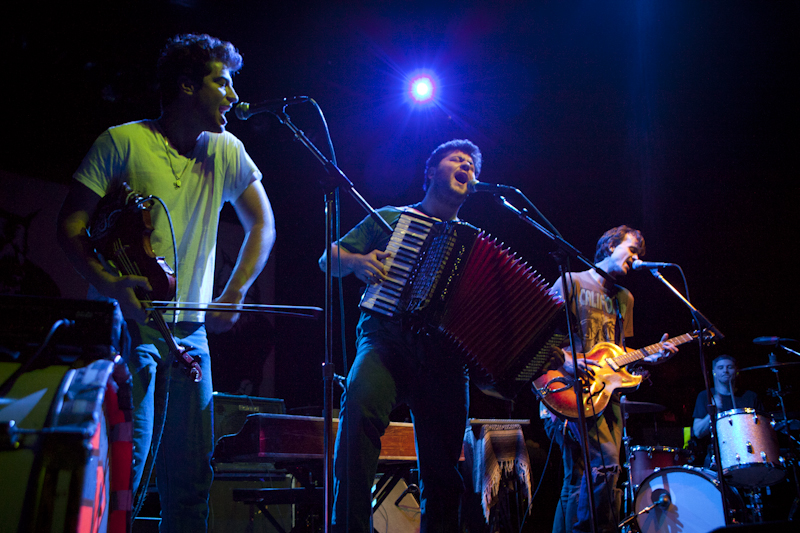 The Felice Brothers at the Vic Theater

During a cross country road trip to the middle of nowhere, you happen upon a carnival erected on the outskirts of town. Wandering in with no expectations–after all, it’s Thursday and you probably didn’t have anything better to do–you discover the relatively unassuming carnies are actually surprisingly talented grassroots musicians with a collection of instruments as eclectic as their sound. Now take that mental picture and insert it into the intimately lit confines of the Vic Theatre. Say hello to The Felice Brothers.

The normal compliment of live instruments is there, but the stage is also lined with keys, an accordion, a violin, what appears to be a marching bass drum and various electronic widgets, gadgets and doodads. When the members of the band start playing (three of them are actually brothers) that interesting collection of instruments, the sound that comes out isn’t quite what you’d expect. Equal parts Bob Dylan and The Band, the sound is so eerily similar that the comparison needs to be drawn – even if it’s a cliché reference at this point in time. And even though the comparison between their sound and Dylan’s through various points in his life is a good one, there’s just something missing.

The grassroots folk rock that filled the sparsely lit Vic Theatre poured out of some place deep inside each of the members through not just their words and songs, but the emotion behind them. The set meandered between guaranteed foot stomping and introspectively emotional with rapid tempo changes that, in the hands of any other musician would have seemed like random accidents. With the Felice Brothers though, the entire experience seemed as if it was crafted to generate an emotional response you’re not used to experiencing with any sort of folk music. Whatever the real reason, by the end of the show everyone was having a good time.

Okerrvil River at the Vic Theater