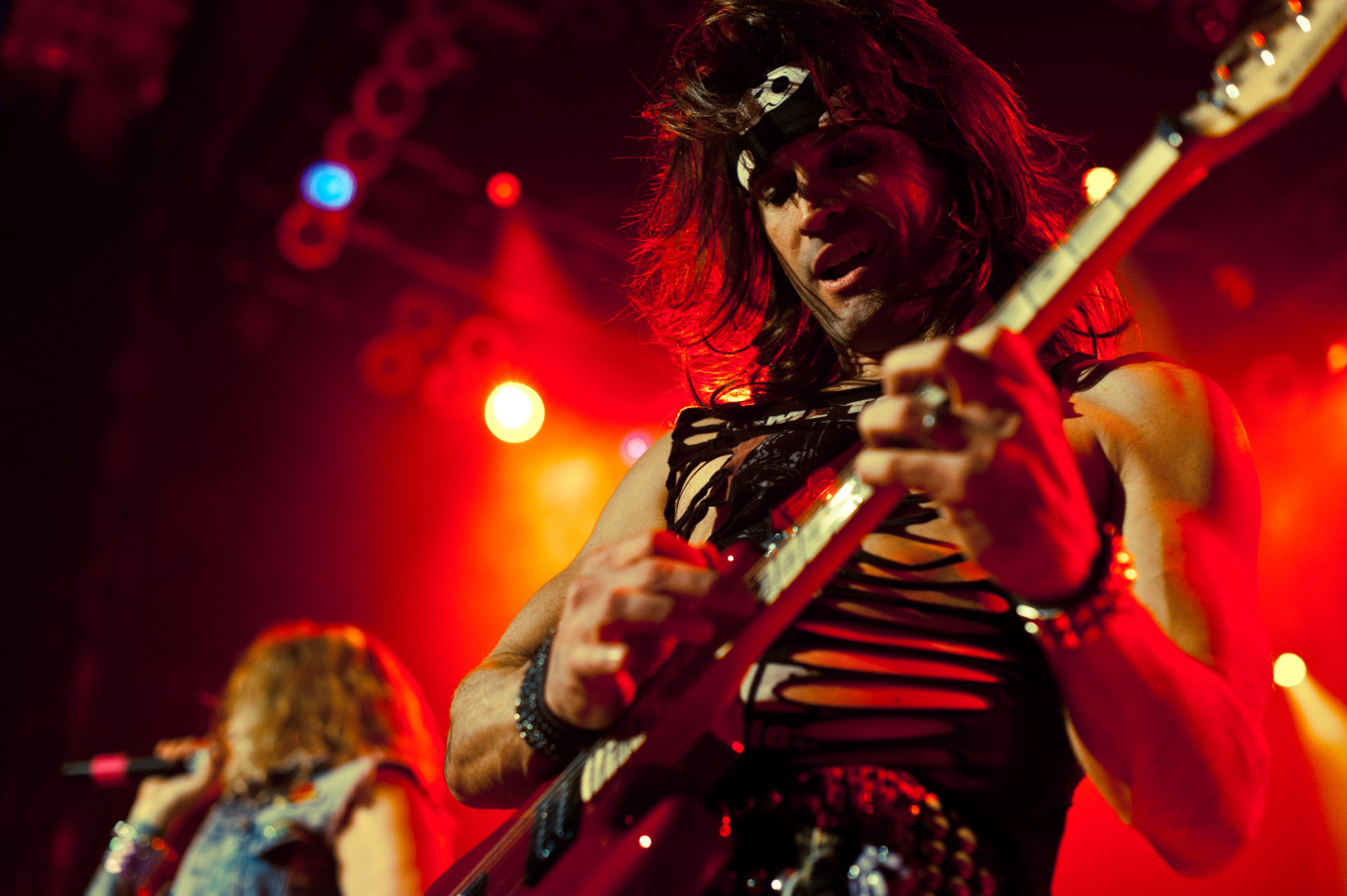 There are a lot of things I’m probably supposed to say about Steel Panther. Talk about how it’s a completely satirical rendition of band that was hugely famous in an era that I, unfortunately, didn’t get to document personally. Maybe talk about how girls taking their shirts off at rock concerts is cliche and demoralizing to women. Or even about how constantly singing about hookers, venereal diseases and cocks is a little over the top. Fuck that.

Steel Panther may be a caricature of the glam and hair metal bands that they started covering, but these days the stuff that passes for “rock n’ roll” could use a little more hairspray, leopard print and definitely more power chords. Steel Panther gave the sold out crowd at House of Blues a big ole’ injection of classic, balls out rock straight from their crotches. The type of pure, testosterone based music that allows long-haired guys to wear shirts with exposed nipples and sequins, put on makeup with a Pretty Pretty Princess mirror, dance in sync and hit notes that have no business coming out of a dude’s mouth, without their manhood ever being questioned. I’m not just saying that because half of their lyrics about girls who picked undressing as a career choice and would happily let you do lines of blow off their asses. I’m saying it because there was more manliness pouring off of this stage than there was at GWAR, it just didn’t happen to be physically covering everything in sight.

There’s no shortage of on-stage antics during their shows either. At one point in time they covered Hoobastank’s “The Reason” and it was the only time I’ve ever heard that song and not wanted to kill myself. Michael Starr (lead singer / Bret Michaels look-a-like) comments on the quality of the sex he just had with Lexxi Foxxx’s (bass player / Joan Rivers with talent) mother. They work together, so moms being a topic of discussion is really no big deal, right? Until he takes it one step further and says that he screwed her so hard that she got diarrhea ass all over his dad’s face. That all came out of the mouth of a PhD in English Literature from Berkeley who was also an Assistant Professor at Texas A & M. You call it crossing the line, Steel Panther calls it another day at the office.

Concerts and shows are two different things. Some of the most dynamic, most talented musicians have absolutely no stage presence. They know how to play music, but they don’t know to play a crowd. On the other end of the spectrum, you can be blown away by a show put on by an artist with no musical merit that’s also tone deaf. The band that sounds like the cologne from Anchormandid both. You won’t hear me say face-melting very often, but that’s exactly what it was. Satchel plays the guitar like he was born with it between his legs. Stix (Last name of Zadinia. See what he did there?) made the entire drum kit his bitch. Lexxi Foxxx actually played his bass–and made it look cool. And the English professor, well, he’s my idol. All I’m saying is, if the Mayan apocalypse happened a year early on December 29th after this concert, I would have died with a huge shit-eating grin on my face.